Bionauts – robots in your body

What if a microscopic robot could treat diseases from within your body?

That’s the vision of Bionaut Labs, an Israel-based startup that represents the future of converging technologies that impact healthcare. (Full disclosure: my venture fund BOLD Capital is an investor in Bionaut Labs.)

Many of the issues we face in medicine today are local in nature. Take brain, lung, or ovarian cancer.

Unfortunately, we treat these local cancer issues with solutions like chemotherapy that affect the entire body.

These broad, systemic solutions tend to be inaccurate, inefficient, and prone to significant side effects. These are some of the reasons why drug design is so astronomically expensive. The unintended side effects of drugs is also why the majority of treatment candidates never make it out of the lab.

But Bionaut Labs seeks to change this.

In today’s blog, I’m going to give you an overview of Bionaut Labs, how their applications of biotech works, and what this means for the future of healthcare.

What is Bionaut Labs?

Bionaut Labs first seeks to revolutionize the treatment of central nervous system (CNS) disorders using robots that are smaller than a grain of rice.

So, where did the inspiration for creating Bionauts come from?

Inspiration for the biotech company

They realized that too many treatments are still systemic in nature and rely on statistical probabilities instead of actually reaching the target tissue.

Bionaut Labs was founded in 2016 to solve this very issue.

The biotech company’s tiny robots are currently designed to deliver therapeutics, but future generations of the devices could provide electrical stimulation, thermal ablation, or radioactive plaque to treat other diseases.

Even more, the Bionauts will contain diagnostic tools to evaluate signals and adjust therapy accordingly in an ongoing closed-loop cycle.

How Exactly Do Bionauts Work? 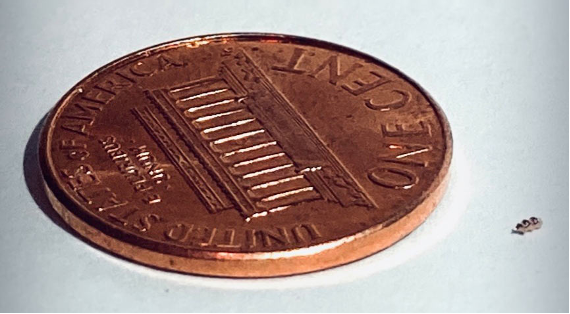 The magnetic Bionauts, measuring less than a millimeter in diameter, have precise geometric features on the micrometer scale, thanks to 3D photolithography manufacturing.

They are injected intrathecally into the lumbar spine (the same procedure as an epidural), or behind the skull and are then guided by magnetic controllers to the target site. The magnetic energy required is less than 10% of that used in MRIs and is much cheaper to generate.

The first generation Bionauts will have automated control, though doctors will still oversee the microbots as they travel through the patient's body. Eventually, as doctors grow more comfortable with the technology, they will allow the Bionauts to operate more independently.

And Bionauts move at a reasonable speed.

Moving from the lumbar spine to a specific region of the brain takes a Bionaut just 5 to 10 minutes.

Once inside the brain tissue, located adjacent to the tumor, the Bionauts are magnetically triggered to release their payload. Their accuracy is on par with surgeons, whose standard deviation falls in the single millimeter range.

Compared to other drug delivery techniques, such as syringes or catheters, Bionauts offer much more control and safety by limiting off-target effects.

The Bionauts then exit the body through the same portal from which they entered, leaving minimal trace.

In the future, some biocompatible materials, like iron, could even allow Bionauts to decompose naturally in the body rather than being removed surgically–further streamlining the procedure.

With human trials fast approaching, we’ll soon have a better sense of all the potential applications of the Bionauts.

Implications for the Future of Healthcare

So, what does all of this mean for the future for healthcare?

The Bionaut technology’s earliest indications are for payload-focused treatments in Glioma and Huntington’s Disease, both rare diseases with high unmet need. Preclinical animal phase testing in pigs and sheep is currently underway, and the company plans to apply for orphan drug designation for Brain Stem Glioma later this year.

But simply delivering therapeutics and treating orphan diseases like Huntington's Disease is just the beginning for Bionaut’s microbots.

In the years to come, resident Bionauts could remain in the body, continuously monitoring tissues to detect diseases before symptoms present. For example, early diagnosis and treatment of Alzheimer’s Disease improves disease outcomes drastically. Bionauts could provide ongoing surveillance to stave off the progression of this and many other diseases.

It’s incredible to think that all of this potential exists in a vessel smaller than a grain of rice.

And as the Bionauts continue to shrink in size, their future applications will grow. Take ophthalmology, where minimally invasive delivery to the eye could precisely treat macular degeneration and diabetic retinopathy.

Technologies such as Bionauts and the many other medical robots entering the healthcare arena are resulting from the extraordinary convergence of exponential technologies.

By applying biotech and robotics in healthcare, the combination of computation, AI, sensors, networks, 3D printing, VR and AR is transforming how we find and treat disease.

Healthcare is one industry where we will continue to see some of the most extraordinary and impactful demonstrations of converging exponentials.

If you’re an ambitious entrepreneur interested in healthcare, there’s never been a better time to get involved.

If understanding how to use exponential technologies to transform healthcare and other industries is important to you, then consider joining my Abundance 360 Community.

Every year, my team and I select a group of 360 entrepreneurs and CEOs to coach over the course of a year-long program. A360 starts each January with a live event and continues every two months with Implementation Workshops, in which I personally coach members in small groups over Zoom.

My mission is to help A360 members identify their MTP, select their moonshot, and craft an Abundance, Exponential, and Longevity Mindset. Together we will actively select and reinforce your preferred Mindsets.

A false sense of security…