Over the course of the next month, I will be releasing a series of China-centered blogs, leading up to my webinar with Dr. Kai-Fu Lee, one of the most plugged-in AI investors on the planet and of the technology’s earliest pioneers.

In the next four weeks, we’ll be covering everything from China’s surging tech investments and the drivers behind China’s growing dominance in AI, to an early look at Kai-Fu Lee’s soon-to-be-released AI Superpowers: China, Silicon Valley and the New World Order.

Of the $154 billion worth of VC invested in 2017, 40 percent came from Asian (primarily Chinese) VCs. America’s share? Only 4 percentage points higher at 44 percent.

And as of two years earlier, Chinese VC coffers had surpassed a remarkable $336.4 billion USD.

In a great push to access intellectual property and drive growth in key tech sectors, China’s VC scene is booming.

Despite a looming trade war and Chinese government restrictions on capital outflow, China-based VC funds and corporate investments continue to pump vast new sums into everything from global biotech startups to AI-equipped robotics.

And we are seeing a clear trend towards China’s now RMB-dominated VC market. A whopping 95 percent of the above VCs are RMB funds.

Now the second largest VC market in the world, China’s VC fundraising nearly doubled between 2015 and 2017, in large part driven by the fruition of China’s Internet universe and mounting government efforts.

As to the latter, ChinaVenture recorded 1,166 government-led funds with 5.3 trillion RMB of targeted capital by the end of 2017. 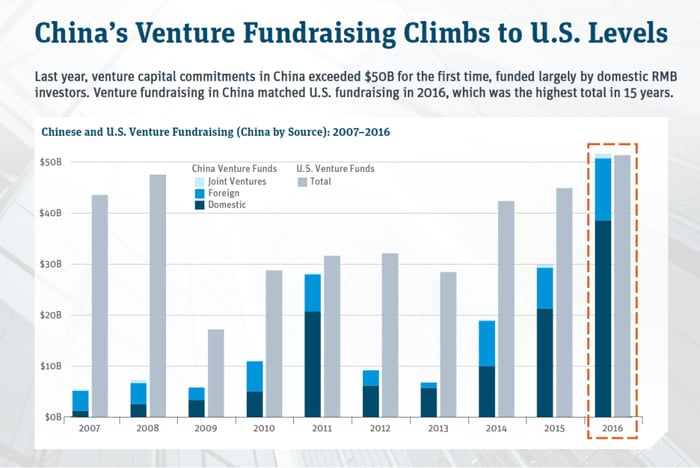 But while many of these funds used to be poured into thousands of Chinese copycat companies and local tech startups, we’re seeing a dramatic outward shift in China’s biggest investments.

Let’s take a look at BAT-backed startups, for instance.

As Baidu, Alibaba and Tencent take on global leadership in artificial intelligence technology, autonomous vehicles and personalized medicine, China’s corporate VC targets are getting an even split between China and the rest of the world.

And as I’ll discuss in a future blog, China’s government aims to be the global leader in artificial intelligence technology by 2030, a task which requires mass absorption of foreign expertise and foreign data.

Back on the mainland, China’s ultra-high-powered startup ecosystem pioneers the world’s greatest supply of high-tech hardware and newly deployable algorithms.

And now sharing the wealth, Chinese VC abroad plays a critical role in picking out the most promising collaborators to learn from at home and work with abroad.

Shenzhen’s Maker Movement puts China in the unequivocal lead when it comes to hardware manufacturing.

With some of the most industrious (not to mention numerous) electronics engineers in the world, Shenzhen provides a huge leg up to Chinese robotics startups that need to iterate fast.

And it’s why savvy Chinese VC funds and investors will often give small U.S. startups of interest a critical gateway to Shenzhen’s abundant resources.

As we start to witness the rise of next-gen technologies like intelligent automated robotics and autonomous drones, this access will be critical, and Chinese VCs will score top global market access in this emerging new sector.

Already in 2016, China accounted for 35 percent of the world’s robot-related patent filings, and Chinese investment has amounted to at least $10 billion per year.

As I’ll discuss in a future blog on Baidu, Alibaba and Tencent, these three tech behemoths are forming a ‘national team,’ with Baidu heading up China’s initiative in driverless cars.

Aiming to decimate traffic congestion and build new AI cities, China has a vested interest in the rapid deployment of AI behind autonomous transit.

Added to the mix is the fact that autonomous vehicles are one of China’s weakest points. Given its reliance on elite AI expertise (quality > quantity) -- a luxury still concentrated at Western juggernauts like Google -- autonomous vehicle rollout in China will need as much foreign assistance as it can get.

And as seen below, BAT is investing significantly in auto tech, each company announcing its own autonomous driving initiative. 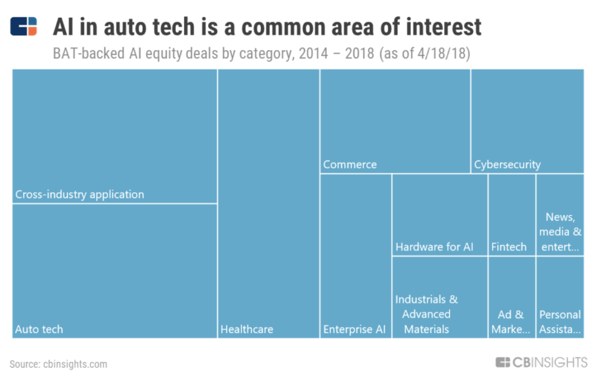 Bringing on global partners from Nvidia to Renesas, Baidu has surpassed 10,000 developers on the project's GitHub repository, claiming to be the most vibrant AV platform vendor in the industry.

Combining open-software and cloud-service platforms, Apollo strives to enable any automotive partner to efficiently build out their own autonomous vehicles system. And as more partners get on board, Apollo expects to amass significant driving data, speeding up AV technology deployment.

But BAT isn't stopping at open-source platforms to learn from partner data.

In line with BAT’s third most heavily backed category, China is investing big in biotech companies.

In Q1 of this year, China-based VC funds poured $1.4 billion into private U.S. biotech firms, making up 40 percent of overall funds raised. This figure is up from $125.5 million a year earlier, indicating a major shift in China’s healthcare-oriented focus.

Just as China has worked its way from a largely ‘copycat’ tech ecosystem to a thriving hub of innovation and cutting-edge research, Beijing is trying to do the same in healthcare.

Given China’s enormous population and overwhelmed medical institutions, predictive analytics and personalized medicine could unleash dramatic economic value. And as biotech emerges as one of the most profitable and disruptive technologies, Chinese VCs may soon help the country cash in.

China is a true miracle story.

After reaping the harvest of a cheap manufacturing sector and export-oriented economy, China is upending traditional investment flows at a rate previously unheard of.

Diving into everything from autonomous drones to AI-driven diagnostics, Chinese VC firms are gaining a hold of global markets everywhere, amping up China’s access to elite tech expertise and valuable new data.

And as international startups position themselves to take advantage of China’s strategic generosity, these Chinese giants will both solidify growing influence at home and technological dominance abroad.

Join Me in China

(1) Webinar with Dr. Kai-Fu Lee: Dr. Kai-Fu Lee — one of the world’s most respected experts on AI — will discuss his latest book AI Superpowers: China, Silicon Valley, and the New World Order. Artificial Intelligence is reshaping the world as we know it. With US-Sino competition heating up, who will own the future of technology?

Podcast Episode 57: Who, Not How