What it is: Nikolas Bentel has just released Aerochromics, his latest line of sensor-enabled clothing. The collection's three shirts each contain environmental sensors that transform in different ways when they come into contact with pollution or radiation. One shirt turns black when it detects carbon monoxide, while the second heats up and changes color in the presence of dust, smoke or other particle-based pollution. The third shirt has chemical process indicator dye that alters its hue upon exposure to electron beam or gamma radiation.

Why it's important: While this collection is primarily to take a more participatory role in the pollution conversation, it's also evidence that sensors continue to dematerialize and demonetize. Soon, we may come to rely on sensor-equipped fashion to alert us to invisible dangers -- both at work and in everyday life. | Join the Discussion

What it is: A team of materials scientists at Washington University in St. Louis have developed a light, inexpensive and scalable water filtration solution that uses sheets made of graphene oxide and bacteria-produced cellulose. "The cellulose at the bottom of the bi-layered biofoam acts as a sponge, drawing water up to the graphene oxide where rapid evaporation occurs," explains Futurity. "The resulting fresh water can easily be collected from the top of the sheet."

Why it's important: Here's a simple, scalable and cheap way to leverage graphene's incredible properties to enable abundance in health. Considering other water-purifying efforts like seawater desalination, we're rapidly reaching a point where abundant access to clean drinking water will be the norm on Earth, not the exception. | Join the Discussion

This 'Placenta on a Chip' Mimics the Real Thing 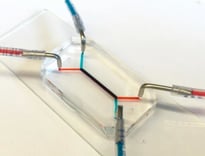 What it is: University of Pennsylvania researchers have developed a placenta-on-a-chip that fully models nutrient transport across the placental barrier -- the first of its kind. "The flash-drive-sized device contains two layers of human cells that model the interface between mother and fetus," explains the press release. "Microfluidic channels on either side of those layers allow researchers to study how molecules are transported through, or are blocked by, that interface."

Why it's important: This placenta-on-a-chip lets researchers study human organs in an unprecedented way. The study is part of a larger initiative funded by the March of Dimes to learn more about why preterm birth happens and how we can prevent it from happening. | Join the Discussion

What it is: In 2008, Israel was in a severe water shortage, and built a series of desalination plants in response (including the Sorek seawater reverse osmosis facility, which is the world's largest of its kind). Today, Israel's water conservation and desalination measures have enabled it to exceed its water needs -- taking the country from water scarcity to water surplus.

Why it's important: Water produced from seawater desalination plants is getting cheaper -- one-third of what it cost in the 1990s -- paving the way for water abundance. What's more, this surplus also enables water diplomacy opportunities with neighbors like Jordan, according to Edo Bar-Zeev, a biofouling expert who now works with the Zuckerberg Institute for Water Research in Israel. | Join the Discussion

What it is: Beta Bionics has become the first company to raise $1 million in regulation crowdfunding -- the 12-month maximum under the new JOBS Act rules -- for its "artificial pancreas" for diabetes, with 775 backers putting up an average of $1,300 each on Wefunder. Beta Bionics' device iLet reads glucose levels in diabetics' implanted sensors, automatically pumping insulin into the body without human intervention.

Why it's important: Will the public outperform professional technology investors at picking successful startups? We won't have to wait long to find out. Interestingly, many of Beta Bionics' funders were diabetes researchers and scientists -- the ideal community members to provide critical feedback for the team to iterate their product. | Join the Discussion

What it is: Scientists at the University of the West of England at Bristol have developed smart bricks that can turn skyscrapers and other public buildings into sustainable, efficient spaces. As UWE Bristol reports, the bricks contain bioreactors packed with microbial fuel cells that can sense and respond to their surroundings, clean dirty water, generate electricity, reclaim phosphate and produce new detergents.

Why it's important: UWE Bristol's Andrew Adamatzky paints a vivid vision of the near future in which we "co-live" with a building that doubles as a massive parallel computing processor: "A building made from bio-reactors will become a large-scale living organism that addresses all environmental and energy needs of the occupants. Walls in buildings comprised of smart bricks containing bioreactors will integrate massive-parallel computing processors where millions of living creatures sense the occupants in the building and the internal and external environmental conditions. Each smart brick is an electrical analogous computer. A building made of such bricks will be a massive-parallel computing processor." | Join the Discussion

What it is: The University of Pennsylvania's recently published research about Kickstarter outlines some staggering statistics. The crowdfunding platform has created over 300,000 jobs, some 8,800 new nonprofits and companies, and generated entrepreneurs and their communities a whopping $5.3 billion in direct economic impact, as Digital Trends reports. Another tidbit from the study: 82 percent of the organizations that launched via Kickstarter are still in operation.

Why it's important: Fascinating insights on how crowdfunding dematerializes, demonetizes and democratizes entrepreneurship and innovation. Ethan Mollick, who led the research, told Mashable that a primary goal of the study was to identify ways to "overcome the biases that prevent many people from pursuing their innovations." | Join the Discussion

What it is: Scientists at the University of Ghent have created a machine that turns urine into drinking water and fertilizer via membrane distillation powered by solar energy. Researchers tested it at a 10-day local festival, where the purifying machine collected and filtered out some 1,000 liters of drinking water from festivalgoers' urine. (They handed over the water to a local beer brewer for a future batch.)

Why it's important: Here's another approach to solving water scarcity through technology, especially in well-trafficked public spaces or in developing nations where water is a precious resource. | Join the Discussion

U.K. Signs a Deal with Amazon to Test Delivery Drones

What it is: Amazon has just inked a deal with the U.K.'s Civil Aviation Authority that lets the retail giant test its package-delivering drones on British soil. "We want to enable the innovation that arises from the development of drone technology by safely integrating drones into the overall aviation system," said Tim Johnson, CAA Policy Director. "These tests by Amazon will help inform our policy and future approach."

Why it's important: Proof that regulation can slow innovation or enable it. Amazon is dead set on bringing Prime Air to market, with testing programs confirmed in the Netherlands, Canada and now Britain. Meanwhile, the U.S. Federal Aviation Administration has taken a "wait and see" approach: earlier this year, the agency released updated guidelines for drone usage that permit limited use, but prohibit many of the autonomous flight features that Amazon is developing. | Join the Discussion