What it is: A matchstick-sized brain implant created by Nick Opie of the University of Melbourne could enable paralyzed people to walk, using their thoughts to control a robotic exoskeleton. The implant is inserted into the blood vessel with a catheter through the groin -- marking the first time researchers can chronically record brain activity without a big operation. Human trials will begin in 2017, and pending their success, the stentrode could be commercially available in six years.

Why it's important: This non-invasive, relatively simple treatment has fascinating implications. As Futurity reports, "The stentrode... could also benefit people with Parkinson's disease, motor neuron disease, obsessive compulsive disorder, and depression. It could even predict and manage seizures in epileptic patients."

Augmented-Reality Construction Helmet to 'Change the Nature of Work'

What it is: The Daqri Smart Helmet is an industrial-grade wearable device for construction workers with a built-in augmented reality display. The helmet's cameras and sensors capture and record real-time environment information, and can display instructions, safety guidelines, and even details human workers wouldn't see -- like the interior of a pipe, for example.

Why it's important: This helmet will increase productivity, efficiency and safety on construction sites and similar industrial areas. It's also an example of how augmented reality will change the way we work. 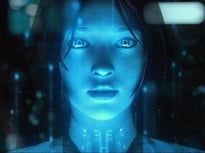 What it is: Microsoft researcher Yongdong Wang recently revealed the company's plans to conduct what "could be the largest Turing test in history" in China with Xiaoice (pronounced "Shao-ice" and translated as "little Bing," according to Business Insider). Xiaoice is built on Bing and can already do more than Google Now and Siri, responding with humanlike thoughts, questions and responses. "Xiaoice can exchange views on any topic," Wang wrote. "If it's something she doesn't know much about, she will try to cover it up. If that doesn't work, she might become embarrassed or even angry, just like a human would."

Why it's important: One step closer to full-blown Artificial Intelligence. Wang says that millions of people use Xiaoice every day. Perhaps most impressively, from Business Insider's coverage: "25% of its users -- some 10 million people -- had said, 'I love you' while using the service."

What it is: During a recent interview at the Imperial College London, Dr. Mirko Kovac unveiled his latest drone research: aerial construction robots with onboard 3D printing technology that can repair or build structures autonomously.

Why it's important: Evidence of the dematerialization and demonetization of construction teams -- and possibly the democratization of disaster relief. It won't be long until Kovac's aerial drones can fly into a disaster zone, model the landscape, design a temporary shelter and print it -- all during the same flight.

What it is: Joint research out of the University of Zurich, NCCR Robotics and the Dalle Molle Institute for Artificial Intelligence has yielded a rescue drone equipped with onboard artificial intelligence that can identify and follow man made trails in forests in search of missing hikers.

Why it's important: In Switzerland alone, over 1,000 people go missing in forests and mountains each year. These drones complement rescue squads beautifully, as they can deploy instantly and navigate challenging terrain with relative ease.

What it is: Through a new partnership with Boeing, satellite company ViaSat has announced that it will create three new satellites to deliver high-speed Internet all over the planet. The ViaSat-3s will be able to deliver twice the combined network capacity of the 400 connected satellites already in space, each capable of 1,000 gigabits per second. Even remote areas without hardwired Internet infrastructure will be able to access Internet speeds of 100 megabits or more per second.

Why it's important: Truly free, ubiquitous high-speed Wi-Fi. What will we create, share, buy and learn when everyone has the capability to stream 4K video from the confines of their rural hut, airplane seat, freighter ship or high-rise building?

Scientists Extend the Lifespan of Mice by Up to 35%

What it is: Mayo Clinic researchers have discovered a way to extend the lifespan of mice by some 35 percent. The key is removing aging "senescent" cells, which have a degenerative effect. "Scientists added a suicide gene to genetically modified mice, giving them a drug that targeted senescent cells," explains Engadget writer Mat Smith. "Treated rodents lived between 25 and 35 percent longer, and were also healthier: they were more active, and had better functioning hearts and kidneys compared to the control group."

Why it's important: A drug adapted from this research could be transformative -- single handedly bringing the average life expectancy to between 95 and 100 years. "If translatable, because senescent cells do not proliferate rapidly, a drug could efficiently and quickly eliminate enough of them to have profound impacts on healthspan and lifespan," said Mayo Clinic molecular biologist Darren Baker.

At Abundance 360, Peter's 250-person executive mastermind, we teach the metatrends, implications and unfair advantages for entrepreneurs enabled by breakthroughs like those featured above. The program is highly selective and we're almost full, but we're still looking for a few final CEOs and entrepreneurs who want to change the world.Apply now for Abundance360 Summit if you'd like to develop an Abundance Mindset.