In this abridged post-Abundance 360 issue, we’ve got tech that turns deserts into farmland, a glimpse of the future of sports, and the latest AI breakthrough from Google’s DeepMind.

What it is: A computer has just beaten the world's best Go player. AlphaGo, a program created by Google-owned Artificial Intelligence company DeepMind, beat European Go champ Fan Hui all five times they played in tournament conditions, and also won 99.8% of Go games against other computer programs. Unlike IBM's Deep Blue, which defeated chess champ Garry Kasparov, AlphaGo wasn't programmed to play Go. Instead, as Nature reports, it learned how to play via a general-purpose algorithm that interpreted the game's patterns.

Why it's important: AlphaGo's learning technique means it can recognize complex patterns, long-term planning and decision-making: refined skills that were once strictly human in nature. Imagine the possibilities when neural networks like AlphaGo, infinite computing and the Internet of Everything converge. 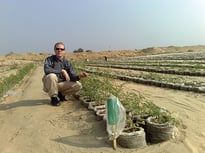 What it is: Desert Control, a Norwegian startup, just won first prize at the ClimateLaunchpad clean-tech business competition for its product Liquid NanoClay. The mixture of water and clay effectively transforms any sandy desert soil into fertile, arable land. As The Engineer UK reports, "The treatment gives sand particles a nanostructured clay coating, completely changing their physical properties and allowing them to bind water... [V]irgin desert soils treated with Liquid NanoClay produced a yield four times greater than untreated land, using the same amount of seeds and fertiliser, and less than half the amount of water."

Why it's important: Technology is a resource-liberating force. In this case, Liquid NanoClay enables us to create fertile land anywhere -- including remote, inhospitable land in Africa, China, Mongolia and the Middle East -- thus making farmland abundant.

What it is: University of Washington engineers have developed a mini handheld microscope that enables real-time differentiation between cancerous and normal brain tissue. Such a device enables neurosurgeons to immediately determine where to stop cutting during brain surgery -- a critical task that's currently time-consuming and imprecise. "[Surgeons are] using their sense of sight, their sense of touch, and pre-operative images of the brain — and oftentimes it's pretty subjective," said study leader Jonathan Liu. "Being able to zoom and see at the cellular level during the surgery would really help them to accurately differentiate between tumor and normal tissues and improve patient outcomes."

Why it's important: Advances in materials science and imaging speed enable microscopes to get smaller, faster and better. Armed with this mini microscope, surgeons can make faster, more accurate decisions and deliver better results.

What it is: What happens to the business models of automakers like Ford and Toyota when we don't need to purchase cars? This article covers the new experiments and initiatives from Big Auto that don't involve actually selling cars, including Ford's shared-use "mobility services," General Motors' $500M investment in Lyft, and BMW's car-sharing program.

Why it's important: In this time of exponential change, standing still is effectively moving backward. As autonomous and semi-autonomous cars gain a bigger foothold in the automotive market, Big Auto will need to be nimble or else suffer a slow death. These experiments by all the major automakers are worth watching.

What Could the World of Sports Look Like in 25 Years?

What it is: The Future of Sports is a 50-page report that features insights from futurists and academics on what the industry could look like in 25 years as exponential technologies become ubiquitous. One compelling example: What happens to the standard stadium parking lot when self-driving cars are the preferred game-day transportation method?

Why it's important: It's not a matter of if exponential technologies will disrupt your industry, but when. This report has vivid examples of how every aspect of the sports industry will change in the future -- from dematerialized parking lots to AI-enhanced seat distribution -- making it a valuable read even for those who don't follow sports.