How to 3D Print Hair, Brushes and Fur

What it is: MIT Media Lab researchers have created a new software platform that enables users to model and 3D print hairlike structures with unprecedented ease and efficiency. Instead of existing modeling methods, which involve using CAD software to draw hairs one by one, users just input the desired height, angle, density and thickness of the strands into the Cilllia software and then let the program go to work. Within minutes, the researchers were able to design and print arrays like fine fur, coarse bristles and Velcro-like hairs -- a feat previously far too complex to consider.

Why it's important: This 3D modeling method enables designers to create alternative actuators and sensors that could lead to truly interactive everyday objects. Imagine a 3D printed child's toy that illuminates a different color based on how the child interacts with it, or 3D printing your own sensor-equipped toothbrush. | Join the Discussion

What it is: Local Motors, a crowdsourced car-design platform and creator of the world's first 3D-printed car, has developed the first self-driving "cognitive" vehicle. The 12-passenger vehicle, dubbed Olli, uses IBM's new Watson Internet of Things system to process data from 30+ sensors in the vehicle and enable passengers to interact with the vehicle using natural language. KurzweilAI reports that Olli can discuss topics such as "how the vehicle works, where they are going, and why [the car] is making specific driving decisions." Olli is currently running in Washington, D.C. with launches planned for Miami-Dade County and Las Vegas later this year.

Why it's important: Olli is another example of the power of converging exponential technologies -- in this case, Artificial Intelligence, smart sensors and robotics. This convergence enables "unparalleled, customized experiences for customers, taking advantage of the massive amounts of streaming data from all devices connected to the Internet of Things, including an automobile's myriad sensors and systems," said Harriet Green of IBM Watson Internet of Things. Another benefit: Because Local Motors will produce the car in its micro factories, they're able to make performance tweaks and other improvements every time they build a new Olli vehicle. | Join the Discussion

An AI Wrote This Movie (And It's Strangely Moving)

What it is: "Sunspring" is a short sci-fi film -- complete with an original musical interlude -- written and composed entirely by an Artificial Intelligence. In this article, Ars Technica, which exclusively debuted "Sunspring," describes the unusual creative process, which involved training Benjamin with dozens of 80s and 90s sci-fi screenplays and some 30,000 pop songs for the musical interlude. It beat out hundreds of other entries in the Sci-Fi London contest, ultimately placing in the top 10.

Why it's important: This article -- and the interview with the film's creators -- offers a fascinating glimpse into what the collaboration processes of the future might feel like. What creative work would you be able to produce if you were able to feed an AI hundreds or thousands of your favorite data points for inspiration, and interface with that AI as your digital brainstorming partner? | Join the Discussion

Elon Musk's Next Goal: Create a Robot to Do Your Chores

What it is: In a post this week on the OpenAI blog, Elon Musk, Y Combinator's Sam Altman, and OpenAI team members Ilya Sutskever and Greg Brockman announced their plans to build a general-purpose robot that can perform basic housework using artificial intelligence and natural language commands. OpenAI's stated goal is to "advance digital intelligence in the way that is most likely to benefit humanity as a whole, unconstrained by a need to generate financial return."

Why it's important: Musk and Altman have each publicly expressed the idea that artificial intelligence poses significant threats to humanity's future. In supporting OpenAI's robot project and overall mission, they channel these concerns in a constructive way -- and align themselves with others who want to fundamentally shape the future of artificial intelligence. | Join the Discussion

Gates Says Altered Mosquito Is Next Weapon to Fight Malaria

What it is: At a conference for the American Society for Microbiology in Boston, Bill Gates said that genetically engineered mosquitoes equipped with "gene drive" could help bring an end to malaria. In normal reproduction, 50 percent of a parent's gene are passed to offspring, but with gene drive, an engineered DNA segment can be passed on to nearly 100 percent of offspring -- dramatically increasing the rate a gene spreads. While Gates said that gene drives are still three to five years away from being "extremely beneficial," he also cited another mosquito project that involves infecting mosquitoes with a bacterium called Wolbachia, rather than genetically modifying them. That project has already been deployed in Australia and Indonesia, with possible large-scale deployment in Columbia and Brazil next year.

Why it's important: In contrast to fighting disease via vaccinations and antibiotics, these methods show that we can alter the offending carriers and diseases directly -- perhaps eventually rendering the problem of "superbugs" moot. Similar techniques might one day help humans become more resistant to certain diseases like zika and dengue. (Note: In other news this week, human trials were approved for genetic modifications to the immune system T cells in cancer patients, funded by tech billionaire Sean Parker's Parker Institute for Cancer Immunotherapy.) | Join the Discussion

Scientists Accidentally Create Nanorods That Harvest Water From the Air

What it is: Researchers at Pacific Northwest National Laboratory (PNNL) have accidentally created carbon-rich nanorods that absorb water at low humidity and expel water at higher humidity -- the exact opposite behavior of any other ordinary material. The discovery happened when researchers analyzed their mistakes while trying to fabricate magnetic nanowires. "Now that we've gotten over the initial shock of this unforeseen behavior, we're imagining the many ways it could be harnessed to improve the quality of our lives," says David Heldebrant, who co-authored the research paper presenting these findings.

Why it's important: With such unique properties, these nanorods will have a wide range of applications. As a start, the PNNL researchers imagine this material used for low-energy water harvesting systems and sweat-removing fabrics. "Further research will examine the nanorods' chemical and physical properties," reports GizMag, "and determine if the method can be used in different nanomaterials to collect other liquids, such as methanol." | Join the Discussion 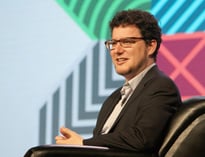 What it is: "The Lean Startup" author Eric Ries has unveiled plans to build a new stock exchange called The Long-Term Stock Exchange (LTSE) to incentivize long-term thinking. Ries and his team are in early talks with the Securities and Exchange Commission and plan to file a draft application later this year. LTSE's three key reforms are (1) reconstructing executive pay so that it's not tied to short-term stock performance, (2) encouraging companies and investors to share more information, such as R&D spending and (3) redesigning investor voting rights.

Why it's important: According to Ries, the frantic pressure to meet quarterly targets of traditional stock exchanges means that "going public will mean the end of your ability to innovate." LTSE could profoundly improve our ability to efficiently allocate the world's human, capital and natural resources. And by incentivizing long-term strategic planning, LTSE could help public companies stay in business longer. | Join the Discussion

Paul Allen Making the Largest Plane Ever for Stratolaunch

What it is: Microsoft founder Paul Allen has announced an audacious new project from his team at Vulcan Aerospace: Stratolaunch, an air-launch platform that will be able to take a giant carrier aircraft into cruising altitude and release a satellite-bearing launch vehicle. The carrier aircraft alone will be an impressive engineering feat: Allen reports that its wingspan alone will be the length of a football field, with the ability to carry up to 550,000 pounds of payload.

Why it's important: Paul Allen has a track record of making history -- after all, this is the same man who teamed up with Burt Rutan to build SpaceShipOne and win the Ansari XPRIZE. And because this operations setup will be more like a traditional passenger aircraft than for a spacecraft, Allen sees Stratolaunch as a platform that will offer space entrepreneurs shorter wait times, greater flexibility, lower costs, and increased opportunities to launch satellites into orbit. | Join the Discussion

DNA Shaping Up to Be Ideal Framework for Rationally Designed Nanostructures

What it is: Scientists at the U.S. Department of Energy's Brookhaven National Laboratory have discovered two new ways to create nanostructures, based on a self-assembly technique called DNA origami. "The first approach allows the same set of nanoparticles to be connected into a variety of three-dimensional structures," reports Science Daily. "The second facilitates the integration of different nanoparticles and DNA frames into interconnecting modules, expanding the diversity of possible structures."

Why it's important: With these two approaches, scientists can rationally design nanomaterials with combined or enhanced properties (e.g. optical, electric, magnetic). "For example, we could create targeted light-absorbing materials that harness solar energy, or magnetic materials that increase information-storage capacity," explains physicist Oleg Gang, who led the research. | Join the Discussion

What it is: Used car marketplace Beepi has launched a virtual reality tool that lets potential buyers view a car in 360-degree scrollable views of the interior and exterior. The company sends trained inspectors to evaluate each car's condition and capture still photos, which are used to create an interactive, VR-like experience.

Why it's important: Beepi demonstrates a relatively early example of how virtual reality will dramatically improve the car buying and selling process. Expect Virtual Reality to transform the consumer experience in a number of other industries, including real estate, retail, education and healthcare. | Join the Discussion

The Way We Learn Today Is Just Wrong