In this week's Abundance Insider: Mushrooms as a platform, artificial moons, and digital immortality.

P.P.S. Next week, Abundance Digital will be streaming an exclusive webinar with Tony Robbins. Join us at 12pm PDT to hear Tony and Peter dive in to their initiatives in human longevity and discuss how exponential technologies affect our human purpose. Sign up here.

P.P.P.S. This week we feature the work of four of Peter's Strike Force Fellows. The Strike Force Fellowship Program aims to connect & empower young entrepreneurs to find their MTP, take moonshots and leverage exponential technologies as they start their careers.

What it is: Stanford University researchers have prototyped microdrones with a winch that enables the drones to anchor themselves to surfaces and pull over 40 times their own weight. This article showcases several displays of these drones collaborating to perform complex real-world motor functions, like opening doors. The drones, named FlyCroTugs by their inventors, demonstrate that drones in this micro-class can actively interact with the world. Researchers next plan to incorporate autonomous operation, improve inter-drone collaboration, and test different sets of actuation and adhesion mechanisms.

Why it's important: This research builds on lessons from nature, showing that one or a few micro-drones, weighing no more than two golf balls, are capable of interacting with the world in ways typically reserved for humanoid robots or larger machines (their flying insect counterparts). This series of winch and anchor modifications is a first step towards much more complex micro-drone activity. Peter often discusses how we are rapidly approaching a trillion-sensor world -- next, we might see a trillion-actuator world. What current challenges could a swarm of interactive microdrones solve? | Share on Facebook

What it is: Self-driving car company Drive.ai just launched a public-facing autonomous car service fully open to all of Arlington, Texas. Starting out with three cars, the service is free to use and will connect riders to several popular destinations, including AT&T Stadium (home of the Dallas Cowboys) and Globe Life Park (home of the Texas Rangers). Through this groundbreaking transportation initiative, Drive.ai also seeks to understand and solve ongoing game day traffic problems, which have risen in recent years.

Why it's important: According to Forbes, the self-driving car industry is predicted to occupy a market share of $557 billion by 2026. As companies like Drive.ai gain momentum, the transformative implications of autonomous vehicles will become mainstream: namely, reducing auto accidents, rewriting the insurance industry, and giving commuters more time for work or relaxation. | Share on Facebook

Digital Immortality: How Your Life’s Data Means A Version Of You Could Live Forever 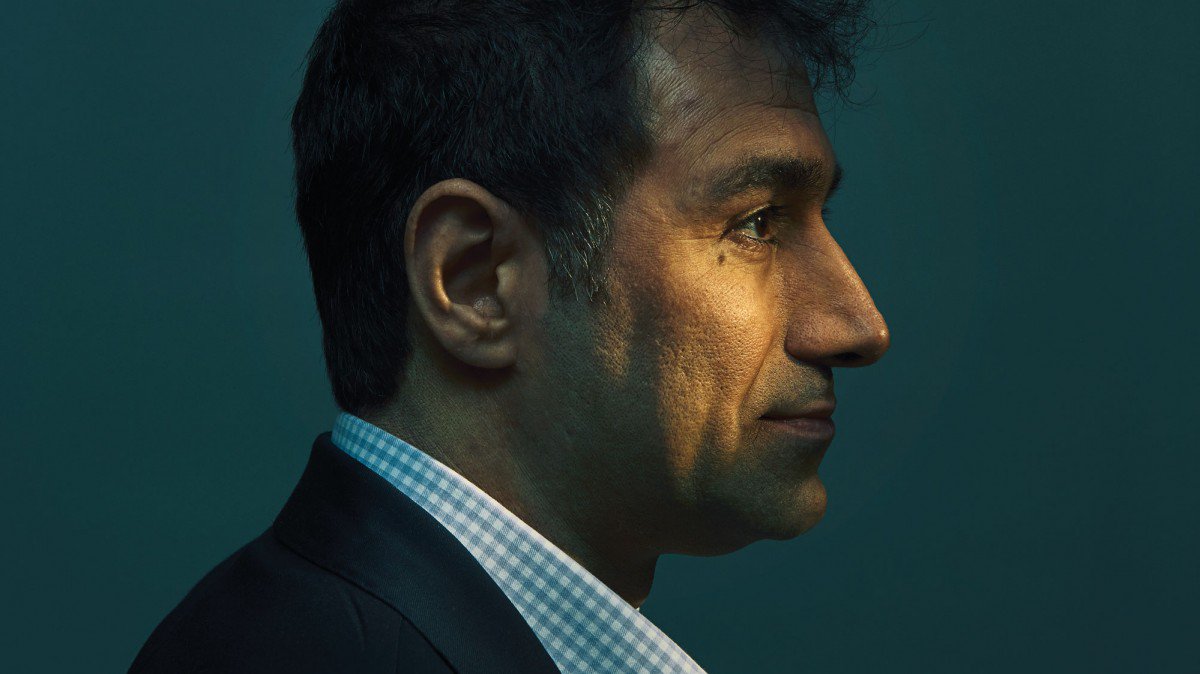 What it is: With his application Augmented Eternity, Hossein Rahnama allows people to create a digital persona that can interact with others on their behalf, even after they pass away. The avatar will be based on the digital footprints a person leaves throughout their lifetime. Augmented Eternity will assess data from multiple sources, including popular social networks and messengers, for emotional context and semantics. The digital avatar can change how it communicates based on a variety of factors (e.g. audience, location or time of day) and formats (e.g. text-based digital chatbot, audio voices like Siri, or 3D animated characters in virtual reality environments).

Why it's important: A major use case for the technology will be the ability to keep someone’s personality alive beyond death. During life, however, a digital avatar could enable us to outsource part of our meetings and social interactions to our digital self. Digital avatars could even be future consultants. As company founder Rahnama points out: “The ability to represent and share expertise can actually contribute to new business models on the internet.” The project also addresses key ethical questions around data science, Artificial Intelligence and how to deal with someone’s digital afterlife. | Share on Facebook

China to Launch 'Artificial Moon' to Light Up Night Skies

What it is: The Chengdu Aerospace Science and Technology Microelectronics System Research Institute Company (CASC) has ambitious plans to supplement city streetlights with the launch of an artificial moon over Chengdu, China. Eight times as bright as the Moon, this artificial moon will sport a reflective coating to cast sunlight back to the Earth. It will also be much closer to the Earth at about 310 miles away, compared to the Moon’s distance of 236,000 miles. And while its launch may be costly, the initiative is estimated to save the city around 173 million  USD in annual electricity costs and can even assist first responders during blackouts and natural disasters.

Why it's important: According to a 2016 study published in Science Advances, over 80 percent of the world’s population lives in areas classified as “light-polluted.” In these areas, residents have experienced noticeable perturbations in circadian rhythms, which can be extremely damaging to long-term health. As a less-harmful alternative to traditional street lights, Chengdu’s artificial moon may be able to decrease light pollution while still illuminating a night sky. As the world transitions to renewable resources, similar technologies could also help enhance our energy sources by enabling solar cell charging at night. | Share on Facebook

Can Mushrooms Be The Platform We Build The Future On?

What it is: After focusing on mushroom-derived sustainable packaging materials for the past decade, Ecovative is now using mushroom mycelium cells to produce newly realistic lab-grown meats. The cells’ hyphae branches are programmable to assemble into complex 3D structures that serve as scaffolding to grow entire animal parts, like chicken wings or fillets — offering an advantage over lab-grown ground meats available today. But this base ingredient has seen various uses. Ecovative formerly used it to produce biodegradable building materials by injecting farm waste products with mushroom spawn and growing the material in a template. And in a win for fashion, the leather bio-fabrication company Bold Threads uses mycelium scaffolding to build cow hide for handbags.

Why it's important: A versatile resource for eco-friendly products, mushrooms could provide sustainable alternatives to building materials, meat, and even clothing. Scientists can now customize structures by controlling the environment, nutrients, and DNA of mycelium cells. And as we more effectively harness the natural molecular assembly abilities of cells in this way, novel applications might even extend to 3D printing human organs. Mycelium cells have already been found to produce biological structures such as blood vessels, which are difficult to replicate manually, and researchers are increasingly able to manipulate cellular function with technologies like CRISPR. When attempting to solve complex biological problems, solutions may already exist in the intricate codes of nature. | Share on Facebook 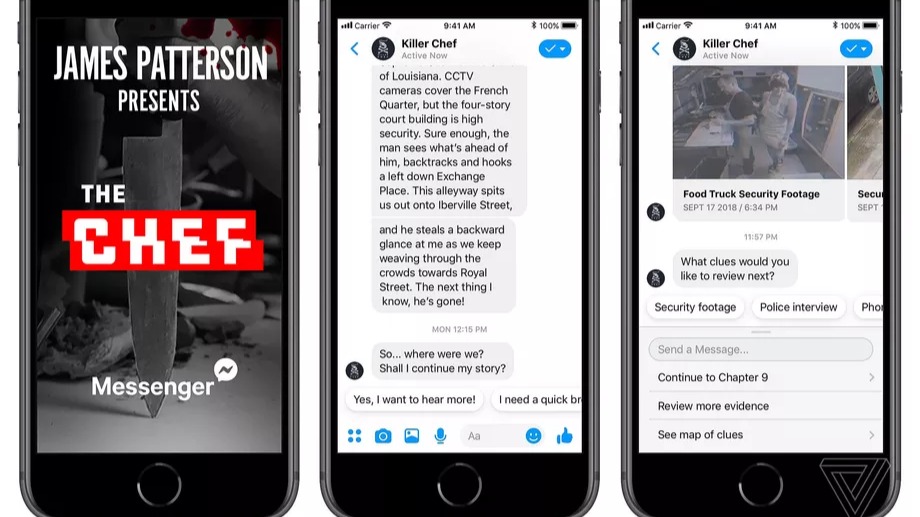 What it is: Launching its first foray into literature, Facebook has partnered with world-renowned author James Patterson to adapt his newest novel The Chef for Facebook Messenger. Released this week on the app, the multimedia book allows readers to interact directly with the story, sending chunks of text, chapter-by-chapter in a Messenger chat, punctuated with videos, sound clips and location data. In the role of a detective, the reader reacts with a knife emoji to continue ‘reading’ and can even interact with the dramatic fiction through live Q&A sessions with Patterson himself, Instagram profiles of main characters, and evidence interspersed among Messenger chat text.

Why it's important: While ebooks and audiobooks have long disrupted traditional ink and paper, the smartphone enables vastly immersive forms of storytelling that will engage readers like never before. Just last week, for instance, Snap announced that it would be debuting a “chat fiction” story in partnership with Hooked. And as multimedia platforms allow you to witness text dialogues in real time, follow protagonists on social media, and even analyze pieces of digital data, authors can now play with timing, fragmented information and orchestrated suspense. Imagine stories within immersive digital worlds, books that are read while still being written, and lengthy story arcs that were never possible with pen and paper. | Share on Facebook

The Power of Community