What it is: Researchers at the University of Southampton have created the ideal micro-scrubbing solution that cleans without the use of chemical detergents or bleach: tap water. Their StarStream device uses ultrasound waves to activate bubbles' surface, creating shear and rubbing. And it cleans in nearly every application: common household cleaning, removing dental bacteria from medical appliances, and scrubbing away biological contaminants from surgical steel.

Why it's important: StarStream and devices of its ilk can help maintain sterile environments without using antibiotics or antimicrobials. "You've got a whole different pathway for tackling this anti-microbial resistance catastrophe," explains Tim Leighton, who led the research.

What it is: Chemical engineers at MIT have created a new desalination process, shock electrodialysis, that uses an electrically driven shockwave to separate water from salt, or toxic waste from water.

Why it's important: While this desalination method won't outcompete traditional processes, shock electrodialysis requires substantially less infrastructure and energy to run -- making it ideal for use in remote locations or in emergencies.

Is Diamond Nanothread the New Graphene?

What it is: A team from Penn State has created a promising new material: diamond nanothreads. It's manufactured out of two different configurations of benzene molecules, which are rings of carbon atoms. Researchers can tune the nanothread to adjust the material's rigidity or flexibility.

Biometric Tattoos for Medicine and the Military

What it is: Chaotic Moon has made a high-tech temporary tattoo that can gather and upload location, air quality, and health information like body temperature, sweat, hydration level and heart rate. The temporary tattoo offers more durability than, say, a watch-style wearable, as it can't be easily removed, but it isn't as expensive or invasive than permanent solutions.

Why it's important: In addition to the clear applications for healthcare and the military, Chaotic Moon's temporary tattoo also has more mainstream uses: for example, helping you track your kids at an amusement park or your friends at a concert.

New Graphene Production Technique is 100x Cheaper than Other Methods

What it is: Glasgow University researchers have developed a way to produce graphene that's stronger and 100 times cheaper than conventional methods like chemical vapor deposition. Instead of using pre-treated copper as a base, which costs about $115 per square meter, they used commercial copper foils -- commonly found in lithium-ion batteries -- at a cost of about $1 per square meter.

Why it's important: Graphene is an important innovation with drastic effects on energy, water purification and electronics -- but it's still currently expensive to produce. This low-cost process demonetizes graphene production, and paves the way for mainstream applications.

What it is: Inspired by the classic stethoscope, MIT has created an ingestible, all-in-one vital signs tracker the size of a multivitamin. Over the course of a day or two, it can measure everything from heart and respiratory rates to temperature and acoustic data.

Watch These Guys Make a Shark Swim With Their Minds

What it is: Brooklyn-based OpenBCI has created an entirely open-source brain computer interface using electrodes connected to a battery-powered circuit board, which sends your body's electrical signals to a computer program. At its inaugural hackathon, these programs included: making a robotic arm move by flexing your arm, working together with two other people to make three robot spiders move across a table, and working with a team of four other people to control an inflatable shark's movement by focusing on one of five direction-based commands.

Why it's important: We're one step closer to controlling all our machines with our minds. OpenBCI is dematerializing and demonetizing access to its brain-computer interfaces, which in turn will catalyze innovation in this area.

What it is: Scientists in Estonia have just completed real-world tests of Li-Fi, a wireless technology that's 100 times faster than average Wi-Fi speeds and far more secure. Using visible light communication, Li-Fi can transmit high-speed data at 1 GB per second. Their next challenge is retrofitting our current Wi-Fi devices to use Li-Fi.

Why it's important: Li-Fi could revolutionize safe, fast Internet access, but because this technology uses Visible Light Communication, it has another potential benefit: enabling LED light bulbs that act as wireless routers.

What it is: Ralph Lauren has teamed up with Oak Labs to install a smart fitting room in its Polo flagship store on Fifth Avenue. The interactive experience recognizes what you brought in to try on, and lets you perform a variety of activities (e.g. selecting a different size or color, adjusting the lighting in the fitting room, or purchasing desired items) without leaving the fitting room.

Why it's important: This intimate interactive fitting room blends the ease of e-commerce with the fun of an upscale retail experience. It gives the retailer an unparalleled level of data on their customers and their buying process from start to finish.

An Algorithm Just Made the Latest Diabetes Breakthrough 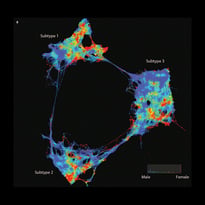 What it is: Machine learning has revealed a groundbreaking discovery: there are not one, but three different kinds of Type 2 diabetes, each with their own distinct health implications. Researchers at Mount Sinai Medical Center mined a database of 2,500 diabetes patients' clinical and genetic data to create an algorithm that modeled patients' similarity and clustered them into subtypes.

Why it's important: By leveraging the exponential technologies available to us -- in this case, machine learning and precision medicine -- we're able to spot patterns, personalize treatments, and make brand-new discoveries. The researchers imagine expanding this method to other diseases in the future, enabling even more breakthroughs.

What it is: Microsoft and Volvo have collaborated on a virtual showroom for the upcoming S90 sedan using the HoloLens mixed reality headset. Unlike previous augmented reality car showrooms, HoloLens spatially maps and adapts to the wearer's surroundings. In this article, The Verge's Adi Robertson explores the showroom.

Why it's important: This early glimpse into mixed reality retail hints at the promise of HoloLens and the future of immersive shopping experiences.

Plugging into your Brain