In this week's Abundance Insider: A new record in residential energy storage, bioreactors for carbon sequestration, and democratized AI toolkits. 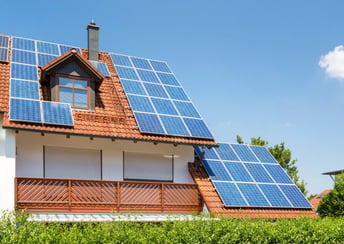 What it is: Marking a record high, U.S. residential energy storage capacity saw additions of over 30 MW in the second quarter of 2019. While a fall in front-of-the-meter storage additions could be responsible for Q2’s lower overall energy storage growth, the first half of the year saw an addition of over 200 MW in new storage capacity. And over just the next 5 years, some analysts forecast total storage capacity could surge up to tenfold in the U.S. Bolstered by progressive policies like the Massachusetts clean peak standard (which requires that a minimum percentage of peak power come from renewable sources), consumer interest will only increase residential capacity’s slice of the pie.

Why it’s important: While solar photovoltaics (PV) receives most of the press, storage is a critical enabler of (or bottleneck to) clean energy adoption, allowing us to stabilize the inherent volatility of wind and solar generation. Moreover, as solar nears price parity with coal and natural gas, mass growth of total energy storage capacity will allow us to democratize clean and constant electricity, regardless of geography. As stated by the U.S. Energy Storage Association’s chief executive Kelly Speakes-Backman, “The long-term growth trends of energy storage deployment nationwide are encouraging and consequential for stakeholders, and for all electricity users who want and deserve a more resilient, efficient, sustainable and affordable electricity grid.” What new innovations might we unleash after returning the 4-8 percent of global GDP currently spent on energy back to the market? | Share on Facebook.

What it is: Materials scientists have now found a way to layer graphene nanoribbons directly atop silicon wafers. For context, graphene consists of a single-atom-thick layer of carbon and is the strongest ultra-thin material known to man. Yet graphene becomes an extraordinary semiconductor when in the form of extremely thin slices (or ribbons). Possibly even outperforming silicon in thermal conductivity and transistor drive current, these nanoribbons could thereby serve as an ideal candidate for future computers. Until today, however, researchers were unable to grow graphene nanoribbons directly on silicon, stemming their wide-scale adoption for graphene-based integrated circuits. Enter the Arnold Group at the University of Wisconsin-Madison. In the team’s now published seminal paper, the researchers outlined their procedure of first growing a thin layer of germanium on top of silicon, and then depositing the graphene nanoribbons on this thin germanium interface. Ultimately, this method prevents graphene from reacting with silicon (to form an ineffective compound) while maintaining graphene nanoribbons’ semiconducting abilities.

Why it’s important: For decades, Moore’s Law has continued to hold true, as transistor count (in integrated circuits) doubles roughly every two years, while price has remained constant. Today, however, consumer computer technology is rapidly approaching the physical limitations of standard silicon transistors—the pillar material for modern computing infrastructure. For this reason, engineers are now turning to new materials, and breakthroughs like that of the Arnold Group could prove decisive in augmenting current computation technology and birthing ultra-fast, lower-power devices. | Share on Facebook.

Genetic mutation appears to protect some people from deadly MRSA.

What it is: Duke Health researchers recently identified a gene that appears to increase a patient’s ability to fight antibiotic-resistant staph infections. The study focused on persistent methicillin-resistant Staphylococcus (MRSA), a form of staph bacteria that is resistant to most antibiotic treatments and is transferred through skin-to-skin contact or invasive procedures. Of the 68 patients compared in the study, half had persistent MRSA and half had cleared the infection from their bloodstream. After running whole-exome sequencing on these patients, the researchers found that 62 percent of the MRSA-free group had a genetic mutation on the DNMT3A region of chromosome 2p. This mutation reduces the body’s anti-inflammatory cytokine IL-10 response, which has been observed to cause tissue damage and even death, if overactive.

Why it’s important: In 2017, over 119,000 Americans suffered from staph infections, and almost 20,000 died as a result. Yet the disease is not solely limited to older segments of the population: the rate of MRSA in children increased tenfold from 1999 to 2008, and is still rising across the board today. Understanding the genetic factors that predispose patients to MRSA could allow researchers to develop far better treatments that exclude antibiotics entirely. Given rising levels of antibiotic resistance (particularly in highly industrialized nations), alternative therapies for common bacterial infections must be developed with haste. Studying the genome has now proven helpful in the case of MRSA, and a range of emerging gene-editing tools could soon drive medical innovation in fighting this disease and many others. | Share on Facebook. 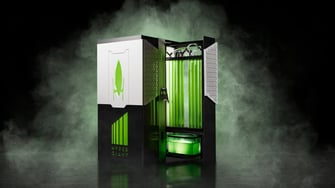 What it is: Startup Hypergiant Industries has just released its new algae-based Eos Bioreactor, capable of sucking in as much carbon dioxide as 400 trees. But rather than consuming an acre of forest land, this bioreactor measures just 63 cubic feet—smaller than a traditional telephone box. Led by CEO Ben Lamm, the company’s technology takes advantage of algae’s remarkable photosynthetic capabilities to capture approximately two tons of carbon per bioreactor. Yet in order to prompt grassroots iterations on the bioreactor, Hypergiant even plans to make its design open source, allowing businesses and individuals to build variants for easy integration in homes and offices spaces.

Why it’s important: Over the past 800,000 years, global atmospheric carbon dioxide concentrations have varied between 180 and 280 parts per million (ppm). In 2017, atmospheric CO2 concentrations had reached 405 ppm—a figure that could easily exceed 500 in coming decades, according to climate scientists. This sharp increase, alongside record high temperatures in just the past few decades, makes novel carbon capture methods a necessity. In the emerging realm of biological sequestration, Hypergiant’s technique not only provides a scalable solution to reducing atmospheric carbon concentrations, but does so in space-deprived metropolitan areas. Moreover, the growing algae can be harvested and used as a high-protein food source, biofuel, or textile. As numerous carbon capture and utilization (CCU) startups leap to the scene, the construction of compact, artificial carbon sinks could help us tackle one of today’s most pressing Global Grand Challenges. | Share on Facebook. 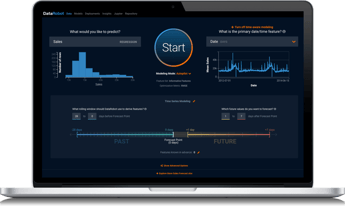 What it is: DataRobot—which might be dubbed an AI infrastructure company—has raised another $206 million in its latest series E round, led by Sapphire Ventures. Seeking to automate almost any traditional task within data science, DataRobot sells its software to simplify clients’ creation of machine learning models, allowing companies to deploy them in weeks (as opposed to years with an in-house team). Customers have, in turn, created over 1.3 billion models across a wide variety of use cases, from optimizing Philadelphia 76ers season-ticket renewals, to predicting which United Airlines passengers will gate-check their bags prior to flight.

Why it’s important: While almost every major corporation (and numerous SMEs) have long begun investing in AI R&D (not to mention recruitment of AI engineers and data scientists), services like that of DataRobot are actively democratizing access to sophisticated tools. We might even think about this as a possible inflection point in machine learning and AI’s user interface, now far more accessible. As a number of infrastructure startups—from Domino Data Labs to Algorithmia—pop up, ML’s use in business optimization problems is quickly becoming ubiquitous, quick, and easy. | Share on Facebook.

How will AR change your industry?