Disease-predicting phone data, real-time wildlife tracking and pollution-fighting artificial intelligence systems. These are just some of the inspiring innovations we curated in this week's edition of Abundance Insider.

What it is: Julius Yego of Kenya won the gold medal in javelin at the recent World Athletics Championships, and narrowly missed the current world record. The distinction? Yego is almost entirely self-taught: he learned to throw the javelin by watching YouTube videos of former Olympians and world title-holders.

Why it's important: As the Rising Billions come online, they'll have unparalleled access to free information. The mark they make on the world -- whether through athletic or academic prowess, consumerism or entrepreneurship -- will be massive.

Uber And Hilton Team Up For Seamless Travel

What it is: Uber has partnered with Hilton on two key guest experiences. Hilton HHonors members and hotel guests can set Uber ride reminders to seamlessly request an Uber on travel days, and the Local Scene feature displays top restaurants and nightlife destinations, as determined by Uber riders' visits.

Why it's important: Uber has mountains of data. It knows exactly when and where its passengers travel -- and with this Hilton integration, it's surfacing and sharing useful insights that enable travelers to explore destinations like they're locals. 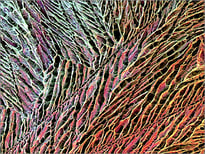 What it is: Scientists at Harvard's Wyss Institute and the Dana-Farber Cancer Institute have developed a vaccine that helps the body attack cancer using its own cancer cells. In experiments, the cryogel triggered an immune response that proactively protected test subjects from tumor growth and shrank existing tumors.

Why it's important: The injectable cryogel vaccine is minimally invasive, simpler and less expensive than other cancer cell transplantation therapies. It's also an excellent illustration of how materials science and engineering converge to mimic the body's natural responses.

What it is: Hawaii is now the first U.S. state to generate electricity using the temperature difference between ocean water at different depths. This new 105-kilowatt ocean thermal energy conversion (OTEC) plant is the world's largest of its kind, producing electricity at the rate of $0.20 per kilowatt-hour.

Why it's important: Because the sun naturally heats surface water, there's a virtually limitless supply of ocean thermal energy. Just one commercial plant would prevent the burning of 1.3 million barrels of oil and a half-million tons of carbon emissions each year.

What it is: Princeton and Harvard researchers recently analyzed the anonymous phone records of 15 million Kenya users and compared this data to areas where cases of rubella were reported. They discovered that subjects' movement patterns matched the locations with the highest risk of rubella within that year-long period. The researchers plan to test this method's efficacy for other outbreaks, like malaria and cholera.

Why it's important: This is one more useful application of Big Data -- in this case, to track the spread of seasonal diseases. Medical professionals can use this information to target localized treatment.

What it is: Researchers at The Australian National University (ANU) and The University of Sydney have developed the world's first radio-tracking drone system for wildlife monitoring. It uses a consumer drone equipped with a miniature receiver and antenna to transmit real-time data to researchers' laptops.

Why it's important: The researchers report that the drone monitoring system can accomplish in 40 minutes what would take a field researcher a half-day to complete -- and monitor terrain that's near-inaccessible for humans.

Japan is Building a Fully-Automated Indoor Farm Capable of Producing 30,000 Heads of Lettuce Per Day

What it is: The Spread Vegetable Factory in Japan is planning a $16.5 million indoor farm that can produce 30,000 heads of lettuce per day, with a goal of 500,000 head of lettuce per day by 2022. The vast majority of the growing process will be automated -- humans will just be on hand during the seeding and germination process.

Why it's important: The Spread reports that automating the cultivation process maximizes growing space and cuts labor costs in half. Automating indoor farming and food production in a scalable fashion could be the key to solving food scarcity in Japan.

What it is: NASA-funded research has yielded a self-healing material that could revolutionize spacecraft. The key is sandwiching solid polymer over a gel that solidifies on contact with air. Watch the image on the left to see how the material handles a bullet impact.

Why it's important: This self-healing material has invaluable applications on Earth and beyond. Imagine self-healing pipes, cars, phones and storage containers -- as well as body armor and other protective gear.

Transparent Batteries That Charge in the Sun Could Replace Smartphone Screens

What it is: Japanese researchers have developed a transparent lithium-ion battery that can recharge itself using the sunlight or other bright light sources -- without a separate solar cell. The researchers changed the chemical makeup of the 80- to 90-nanometer electrodes, so they maintain their efficacy but also allow light to pass through them.

Why it's important: Future iterations of this battery could become smart windows that auto-dim during the heat of the day and simultaneously store power, or perhaps become additional smartphone batteries that store power while users are outside.

These Microscopic Fish Are 3D-Printed To Do More Than Swim

What it is: University of California, San Diego nanoengineers have created a microscopic 3D printed robot that can sense and remove toxins in their environment. Smaller than the width of a hair, these microfish can swim on their own, detect and neutralize toxins, and even sense and direct drug delivery.

Why it's important: The flexibility that 3D printing provides means that researchers can print any shape they want -- not just birds -- to intelligently detect, diagnose and improve their environment.

How Artificial Intelligence Can Fight Air Pollution in China

What it is: IBM Research China has built a computer system called Green Horizon that can predict the severity of air pollution in specific areas of Beijing days in advance using adaptive machine learning. Green Horizon takes several different models and enormous quantities of data into account for its predictions, which are 30% more precise than those created with conventional approaches.

Why it's important: In China alone, pollution accounts for over a million deaths per year. Future versions of this artificial intelligence system could suggest proactive measures to reduce pollution -- for example, restricting the number of drivers on the road or closing specific factories -- in metropolises all over the planet.

In the Future, Buying a Car Involves No Pressure, No Lies, No Leisure Suits

What it is: A fascinating glimpse into the future of car-buying, featuring experiments and startups from the likes of Lexus, Beepi and Vroom. Negotiation-free new car pricing, on-demand test drives (the car comes to you), and more efficient competition for trade-ins are all converging to make the traditional used car lot obsolete.

Why it's important: We're watching the 6 D's play out at the car dealership level, and fortunes will be made and lost while navigating this change. The stress-free purchase experience described in this article requires a completely different sales approach than the high-pressure ones used previously. Will car dealers adapt or get disrupted?

Speech-Classifier Program is Better at Predicting Psychosis Than Psychiatrists

What it is: An automated speech analysis program correctly predicted psychosis in at-risk young people better than human psychiatrists' clinical ratings -- with 100% accuracy over a two-year period. The program analyzes patients' semantic coherence and syntactic structure in a quantitative fashion to identify thought disorder even before the onset of psychosis.

Why it's important: Researchers have previously never been able to reliably identify those at risk for a psychotic episode before psychosis actually occurs. KurzweilAI notes that early identification could lead to proactive support and intervention that could potentially delay, mitigate or prevent the onset of serious mental illness.

The Dutch Railway Could Run Solely on Wind Power By 2018

What it is: The Netherlands has committed to run its electric rail system entirely on energy produced by wind farms -- within three years. Wind farms currently supply about half of the rail network's energy, and the wind power needed to ramp up efforts will come from within the Netherlands, Belgium and some Scandinavian nations.

Why it's important: The Dutch railway system carries 1.2 million passengers a day, and this move to renewable energy could inspire other large cities to follow suit. The International Energy Council reports that land-based wind power installation rates have gone up by 24% annually each year for the last 15 years -- soon, 18% of all global energy production will be from the wind.

What it is: Buzz Aldrin has announced his latest mission: the Buzz Aldrin Space Institute, which will be dedicated to research supporting Mars colonization. Aldrin has been working on this effort since his retirement from NASA and the Air Force, and he's partnered with the Florida Institute of Technology to supercharge his efforts.

Why it's important: Buzz Aldrin enters a growing field of players interested in colonizing Mars, including SpaceX, NASA and Mars One. With such an influx of investments, focus and supercredible entrepreneurs, innovation and dramatic breakthroughs aren't far behind.