We’re now entering a critical week in the global pandemic, and the speed of our response is vital.

One piece of good news is that China’s number of new cases is plummeting, proving that CONTAINMENT — while extremely difficult — IS POSSIBLE.

China’s efforts were unprecedented, as the nation’s collective response to this outbreak ranged from building 2 hospitals in under 10 days, to locking down an entire city, to rapid national coordination of public action.

As announced by Dr. Tedros Adhanom Ghebreyesus, head of the World Health Organization (WHO):

“We would have seen many more cases outside China by now — and probably deaths — if it were not for the [Chinese] government’s efforts [...] The speed with which China detected the outbreak, isolated the virus, sequenced the genome and shared it with WHO and the world are very impressive, and beyond words.”

But it’s not just China’s government that has taken action. The proper use of Exponential Technologies helped play a major role.

This blog features the work of Fionn Wright (based in China) who summarized what the world can learn from China’s Coronavirus containment and eight high-tech strategies to combat the COVID-19 spread. (Fionn’s original article posted here).

This blog is intended to give you hope and inspiration, and to give us back control over a very scary and difficult situation.

Here are 7 High-Tech Strategies worth learning.

(1) Fill the Skies With Drones 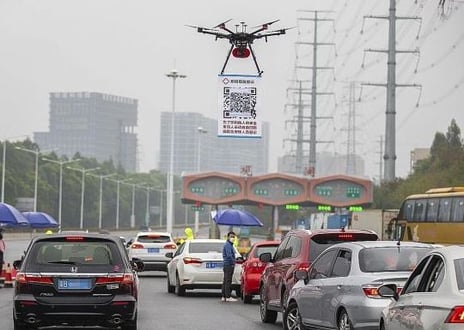 To conduct temperature measurements, drones use infrared thermal imaging, which has not only proven more accurate than human-conducted readings, but also massively expedites the evacuation of community personnel. Simultaneously, drone readings have helped reduce close contact between community workers and residents, minimizing risk of secondary infection.

And in a surging nationwide effort, more and more Chinese towns have used plant protection drones to carry out disinfection operations during the outbreak. In Shandong province, for instance, villagers of Huji town used only two plant protection UAVs to disinfect about 480,000 square meters of the village in less than an afternoon.

But beyond agricultural uses, UAVs are now conducting unmanned delivery of medical supplies and the like. Having taken its maiden flight on February 6, a now routine drone flies to the center for disease control in Xinchang County, spanning the nation’s first anti-epidemic “urban air transport channel.”

Other unmanned delivery devices, such as in Wuhan, have transported medical supplies between JD logistics stations and local hospitals, avoiding vehicles and pedestrians in transit. And early on, Zhejiang Xinchang People's Hospital took the lead in using drones to transport samples for examination. Capable of automatically transporting up to 4kg of supplies between two unmanned stations without human operation, these drones tremendously reduce the risk of cross-infection.

How might our own local and state governments coordinate similar drone routes with hospitals, retirement homes, apartment buildings, aid centers, and others? 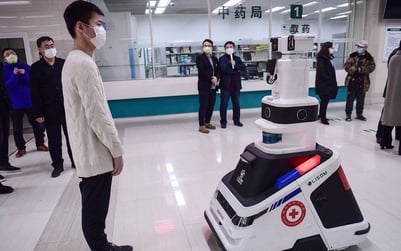 Medical staff place items on robots, robots go to patients’ doors, and patients receive items contact-free. After completing a route, robots automatically return to the nurse’s station, where they are disinfected and continue delivery. In some hospitals, these robots can even provide contact-free delivery service to 20 wards, on average.

And in the F&B arena, robots and driverless vehicles are now servicing hospitals and communities alike with touch-free delivery of everything from coffee (Luckin’s “ruiji” machine) to fresh vegetables.

In the case of the latter, driverless cars now complete 24 deliveries every 30 minutes, greatly reducing the burden of front-line delivery staff.

Prompted by the outbreak, zero-contact distribution, self-driving freight, robo-taxis and other forms of autonomous navigation are now exploding business opportunities.

(3) Bring on the Biotech 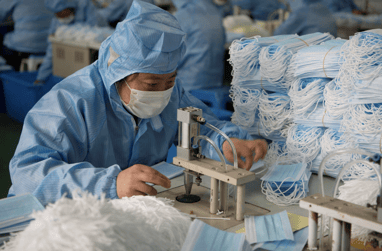 Already, one medical company (999) has released a new food line of “medicinal” noodles, touting immune-boosting ingredients, in an attempt to help stem vulnerability to infection.

Although in disparate industries, carmakers (BYD and Baojun) and iPhone manufacturers (Foxconn and Changying Precision) are churning out face masks faster than face mask manufacturers themselves.

Government and private sector capital is flooding biomedical services and medical technologies. A mere four days after the stock market opened this year, the biggest gainers were pharmaceutical businesses, medical device services, biological products and chemical pharmaceuticals — all up more than 10%.

Online consultations have gone from non-existent to the new norm.

This new algorithm could tremendously alleviate pressure on hospitals, completing recognition processes in 20 seconds — far faster than the 5-15 minutes it takes a doctor to do the same. 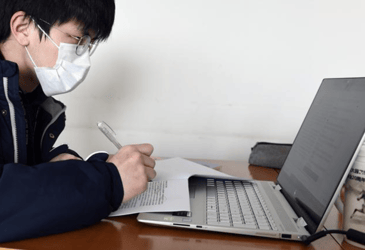 More than 20 provinces, including Guangdong, Jiangsu and Henan, have now joined China’s “home-schooling” program, as over 10,000 primary and secondary schools and 5 million students attend classes via live streaming.

The boom in China’s virtual classrooms and online education has been utterly unprecedented, serving as an example the world can follow.

On February 7, China’s Ministry of Education shared instructions on the deployment of online teaching for students to resume classes from the safety of their homes, providing 24,000 online courses from more than 20 online platforms for FREE.

And while free education services help students, the EdTech business is booming.

In the long run, this surge in (what was at first interim) virtual education could dramatically change the face of K-12 and higher education, as penetration and conversation rates multiply.

How will EdTech companies rise to this challenge in our own communities? Institutions? Universities? How will businesses seize this opportunity for a latent exploding market while serving the needs of millions? 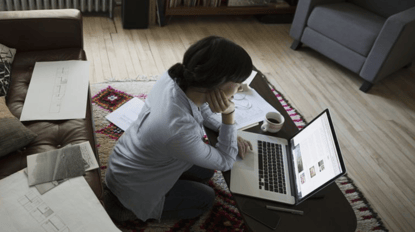 Putting health and safety above mid-term economic growth, the world’s biggest remote work experiment has been unleashed by COVID-19.

On a recent earnings call, Alibaba CEO Daniel Zhang told investors that, while a tremendous challenge for society, Coronavirus also gives people a “chance to try a new way of living and new way of work.”

Tencent has also seen dramatic growth in demand for its work tools. Now among the top five most downloaded free iOS apps in China, WeChat Work and video-conferencing app Tencent Meeting are serving millions of firms.

After recording a tenfold increase on February 10th (when many companies and schools resumed work), WeChat Work is now used by over 2.5 million companies, covering 60 million corporate users.

Compared with their foreign peers, like Slack, Chinese apps have jumped on “China Speed” to meet the unique demands of Chinese employees.

Staying home and avoiding contact is crucial. And every person counts. But in the interim, our ability to build and iterate on fully digitized platforms for the future of work is a forced opportunity like no other. And as I’ve said before, never waste a crisis…. 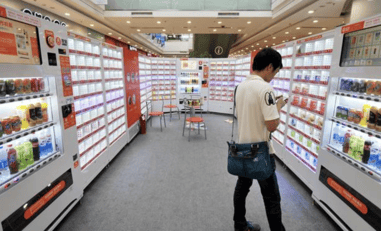 After completion of the new Wuhan hospital, an unmanned supermarket was launched within a day.

Open 24/7, the supermarket touts self-service checkout (no receipts), and received over 200 customers on its opening day. While it was reported that Jack Ma’s original launch of an “unmanned supermarket” in 2017 lost him about 4 billion RMB since then, the concept has now hit perfect timing. And companies from Meituan and Ele me to KFC have launched “no-contact distribution” services one after the next amidst Coronavirus.

While China’s e-commerce ecosystem is already far ahead of the rest of the world, there are still numerous items people prefer to buy offline.

But post-outbreak in China, buying groceries online has also become the norm. China’s Sinopec petrol stations now sell no-contact groceries: buy online, and have groceries put directly into the trunk of your car. No need to leave the driver’s seat or even open the window.

What novel business platforms will allow us to revolutionize no-contact, autonomous retail? 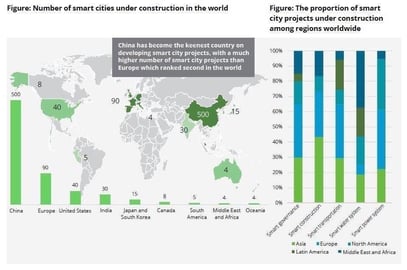 Integrating drones, robots, e-commerce platforms and novel biotech (as discussed above), the smart city has become an integrated platform for defending society against Coronavirus’s spread.

China has also showcased an extraordinary example of mutual accountability between government and populace. We already caught a glimpse of this when China’s government constructed 2 hospitals in fewer than 10 days as millions watched a live-stream of real-time progress, keeping their government accountable to its promise.

While we have yet to see how 21st century smart cities serve as community defense mechanisms, their help in protecting against outbreak in China should spur capital investment and innovation across our own smart cities worldwide. (Already, the Chinese government predicts public and private investment of 500 billion RMB (US$74 billion) in the nation’s smart cities.)

Creating a network of real-time information, WeChat and Baidu Maps have released clinic information covering over 100 cities across China, and over 3,000 clinics. Patients can now find designated hospitals qualified to treat fever and Coronavirus on their phones, drastically reducing confusion and wait times.

Smart cities can be further integrated in response efforts through the use of big data and cloud computing.

Cities might be equipped with early-warning mechanisms to rapidly detect infection, notify communities, and stem spread before it begins.

Now the new normal in China, smart cities are becoming preventative tools, whereby everything is tracked and analyzed for rapid decision-making in real-time.

It is not too late to learn from China’s efforts.

Those countries now in the early days of this pandemic are still capable of getting this under control. The ability to mobilize around our shared public health, saving lives, and global recuperation, are entirely within our reach.

If we are open to listening, learning, emulating, asking for support, and acting, we are extraordinarily well-positioned today (more than ever before in history), with the ability to instantaneously share information, make collective decisions, and harness technology.

The virus can be contained if the world collectively takes action, using tactics and technologies that we already know work. Panic is not useful, swift action is.

Whether governments and institutions have executed a consistent response or not, businesses do have the tools to meet COVID-19’s secondary challenges. Our schools and communities are able to launch coordinated responses through organized, online dialogue. And we, as individuals, are both capable of and responsible for (1) containing spread, and (2) emerging from it stronger, wiser, better equipped, and with renewed ingenuity.

What ideas do you have? What tools or capabilities lie within your company, your community, to design new solutions and meet unique challenges? How will you self-educate, innovate and improve over the next two weeks and in coming months?

Good News About the COVID-19 Pandemic