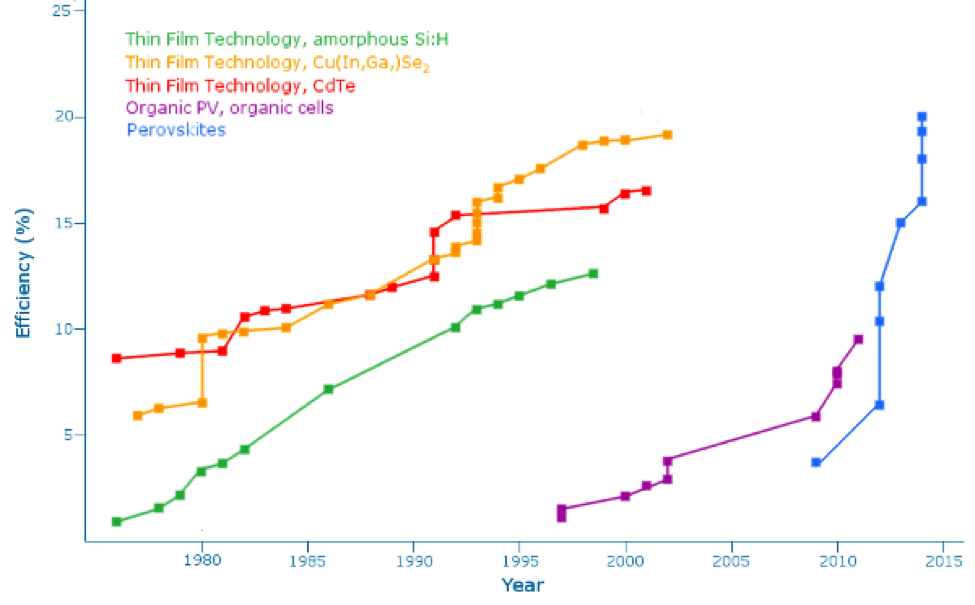 In the next 20 years, between 50 percent to 100 percent of the world's energy production could come from solar.

Today, the global oil and natural gas industry is about a $4 trillion business.

It's big money, and in the U.S., 67 percent of the electricity generated in 2015 was from fossil fuels (coal, natural gas, and petroleum).

This is about to change.

We are on the cusp of a solar revolution where the cost of solar cells will plummet, efficiency will rise dramatically, and the incentives for widespread adoption will become compelling.

This blog is Part 1 of 2 about the exciting developments happening in solar.

Today, we'll focus on a recently discovered material called perovskite and its massive implications to society.

Over the past few decades, the most widely used form of solar energy has come from a material called silicon.

The silicon solar cell was discovered in 1953.

A few years later, the first commercial solar cells began to pop up.

Unfortunately, these first commercial cells were way beyond the means of normal consumers and were also relatively inefficient at producing energy.

Over the decades, silicon solar cells have become increasingly more affordable and efficient, with most solar panels averaging around 14 percent to 18 percent efficiency (up from 6 percent back in 1954), and as low as $3 per watt (down from a staggering $300 per watt in 1956).

Although solar energy currently only accounts for 0.4% of electricity generated in the U.S., solar energy production is expected to grow significantly over the decade ahead.

Domestically, the market is projected to grow 25 percent to 50 percent this year and global projections are at 30 percent.

The graph below illustrates how global photovoltaic development and capacity has increased over the years. 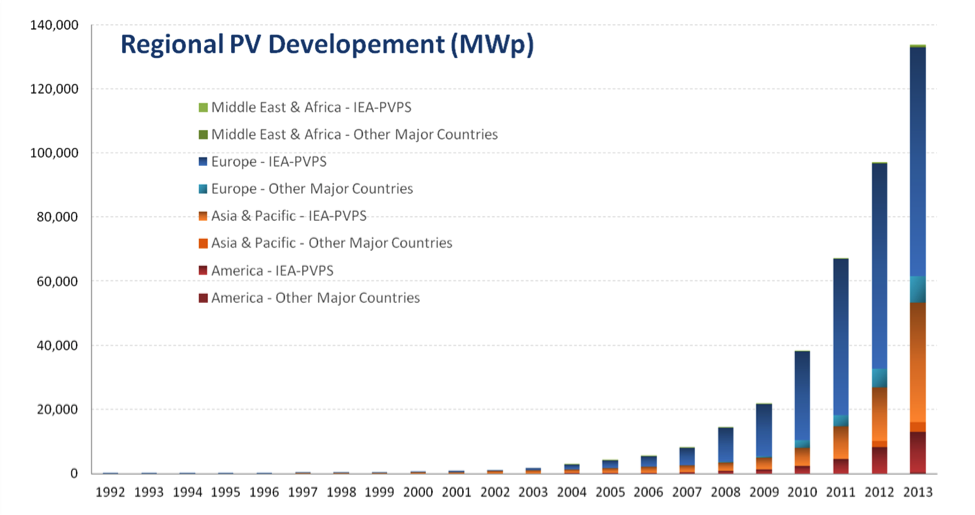 The implications of this are staggering, both on an economic and environmental level.

But what's even more interesting is a new material that's poised to completely change the face of solar... and with that, let's dive in.

At Abundance 360 this year, Jeff Carbeck, the head of Advanced Materials at Deloitte Consulting, introduced us to an extraordinarily exciting new material called Perovskite.

Perovskite is a light-sensitive crystal that has the potential to be more efficient, inexpensive, and versatile than all other existing solar solutions to date.

Over the past five years, perovskite's conversion efficiency has increased dramatically -- from 4 percent to nearly 20 percent, making it the fastest developing technology in the history of photovoltaics.

Scientists started experimenting with perovskite in 2009, using it as a dye to absorb light and create charges, which could then be separated and used to generate energy with a semiconductor.

In 2012, however, scientists realized that perovskite could actually act as a semiconductor itself, and began to experiment with using it in solar cells.

Because of how perovskite is created, perovskite solar cells have a few important advantages and disadvantages over silicon-based cells. 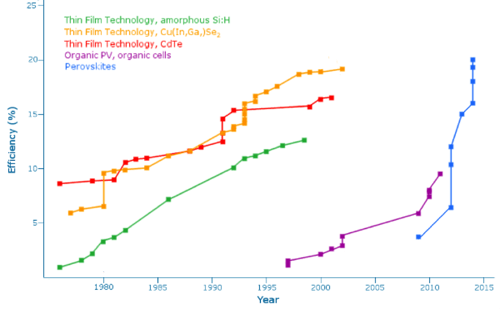 Perovskite solar cells have increased in power conversion efficiency at a phenomenal rate compared to other types of photovoltaics, source: Ossila

One interesting solution is to combine perovskite with other photovoltaic materials to create more efficient systems.

"As there are different wavelengths for solar energy, a combination of different materials for making solar cells would work best for energy absorption."

The world has long had high hopes for solar, and it seems that potential may finally be close to being realized.

Once again, there is 5,000 times more solar energy hitting the surface of the Earth than the human species uses in a year.

The barriers to commercial development, however, are still significant.

Many entrepreneurs and investors are cautious about solar after having been burned in the early 2010s, when a string of solar companies took in considerable capital before shuttering their operations.

That being said, there has been a resurgence of promising startups developing commercially viable solar solutions – and we believe we'll see perovskite solar cells as early as next year.

New developments are occurring every day, pointing towards a future with abundant energy, abundant clean water and abundant possibility.