Google Gets Us Closer to Error-Corrected Quantum Computing 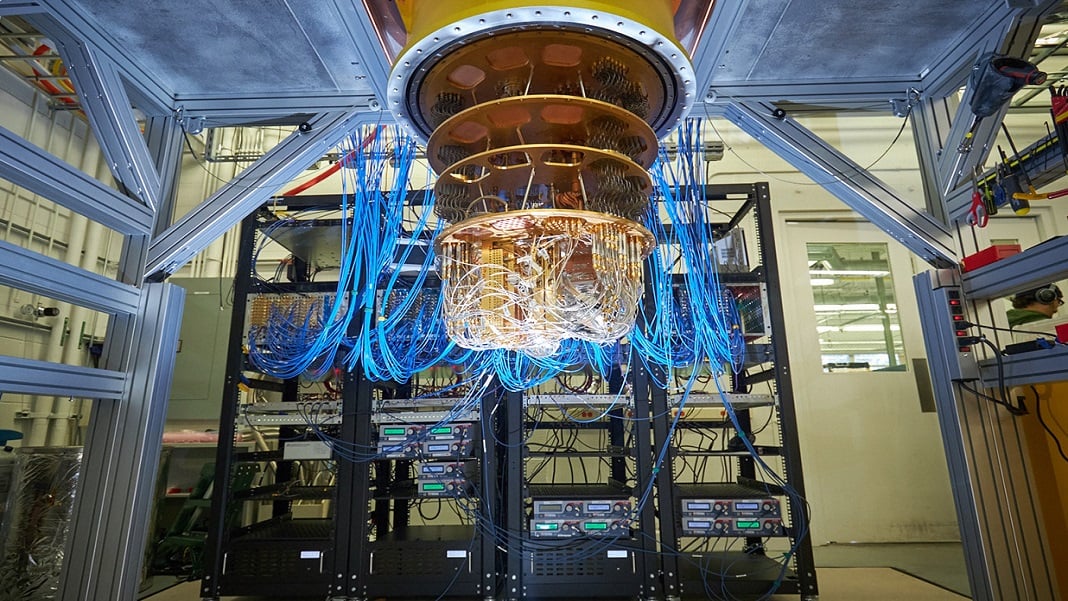 One of the biggest barriers standing in the way of useful quantum computers is how error-prone today’s devices are.

Because creating reliably successful quantum computers will allow us to better control the building blocks of life and the universe.

For example, quantum chemistry simulations will be the way we design and choose our next generations of drugs and cancer cures.

But a significant obstacle preventing that future is the error-prone nature of the current class of quantum computers.

That’s why Google’s recent experimental demonstration of how to correct this problem and scale it up for much larger devices is such big news. Tracking the latest developments in advanced computation is a key focus of my year-round coaching program Abundance360.

In today’s blog, we’ll discuss the details of Google’s demonstration and what it means for the fast-developing field of quantum computing.

(This article originally appeared on SingularityHub by Edd Gent, adopted by Peter Diamandis for his Abundance Community.)

THE PROBLEM OF ERRORS IN QUANTUM COMPUTING

The power of quantum computers comes from their ability to manipulate exotic quantum states, but these states are very fragile and easily bothered by sources of noise, like heat or electromagnetic fields.

This can introduce errors into calculations, and it’s widely accepted that error correction will need to be built into these devices before they’re able to carry out any serious work.

The problem is that the most obvious way of checking for errors is out of bounds for a quantum computer.

Unlike normal binary bits, the qubits at the heart of a quantum computer can exist in a state known as superposition, where their value can be 0 and 1 simultaneously. Any attempt to measure the qubit causes this state to collapse to a 0 or 1, derailing whatever calculation it was involved in.

To get around this problem, scientists have turned to another quantum phenomenon called entanglement, which intrinsically links the state of two or more qubits. This can be used to lump together many qubits to create one “logical qubit” that encodes a single superposition. In theory, this makes it possible to detect and correct errors in individual physical qubits without the overall value of the logical qubit becoming corrupted.

To detect these errors, the so-called “data qubits” that encode the superposition are also entangled with others known as “measure qubits.” By measuring these qubits it’s possible to work out if the adjacent data qubits have experienced an error, what kind of error it is, and in theory correct it, all without actually reading their state and disturbing the logical qubit’s superposition.

While these ideas are not new, implementing them has so far proved elusive, and there were still some question marks about how effective the scheme could be.

Google has now demonstrated the approach in its 52-qubit Sycamore quantum processor and shown it should scale up to help build the fault-tolerant quantum computers of the future.

Creating a logical qubit relies on what is known as a stabilizer code, which carries out the necessary operations to link together the various physical qubits and periodically check for errors.

The team started implementing the linear code with 5 physical qubits and then gradually scaled it up to 21. Crucially, for the first time they demonstrated that adding more qubits resulted in an exponential increase in the ability to suppress errors, which suggests the length of time a logical qubit can be maintained should increase significantly as the number of available qubits grows.

However, there’s still a long way to go. For a start, they only detected errors and didn’t actually test out the process for correcting wayward qubits. And while the linear code can detect the two main types of error—bit flips and phase flips—it can’t do both at once.

The second code they tried out is capable of detecting both kinds of errors, but it’s harder to map these detections to corrections. This setup is also more susceptible to errors itself, and the performance of the physical qubits will have to improve before this approach is able to demonstrate error suppression.

WHERE DO WE GO FROM HERE?

This lattice-based approach was a small-scale trial of the “surface code” that Google believes will ultimately solve error correction in future large-scale quantum computers.

And while it’s not there yet, the researchers say it’s within touching distance of the threshold where error suppression becomes possible.

They conclude by pointing out that practical quantum computing will probably require 1,000 physical qubits for each logical qubit, so the underlying hardware still has a long way to go.

But the research makes it clear that the underlying principles of error correction are sound and will be able to support much larger quantum computers in the future.

We don’t yet know what new innovations will arise once quantum computing matures and takes off. But what we do know is incredibly exciting.

For example, because physics and chemistry are quantum processes, computing in qubits will enable an era of discovery in new chemicals, new drugs, and new materials.

At the same time, quantum computing will amplify AI, remake cybersecurity, and allow us to simulate extraordinarily complex systems.

If you’re an entrepreneur excited about the developments we’ve made so far with quantum computing, there’s no better time to get involved.

What is Your True Biological Age?

How to Impact Your Longevity TODAY