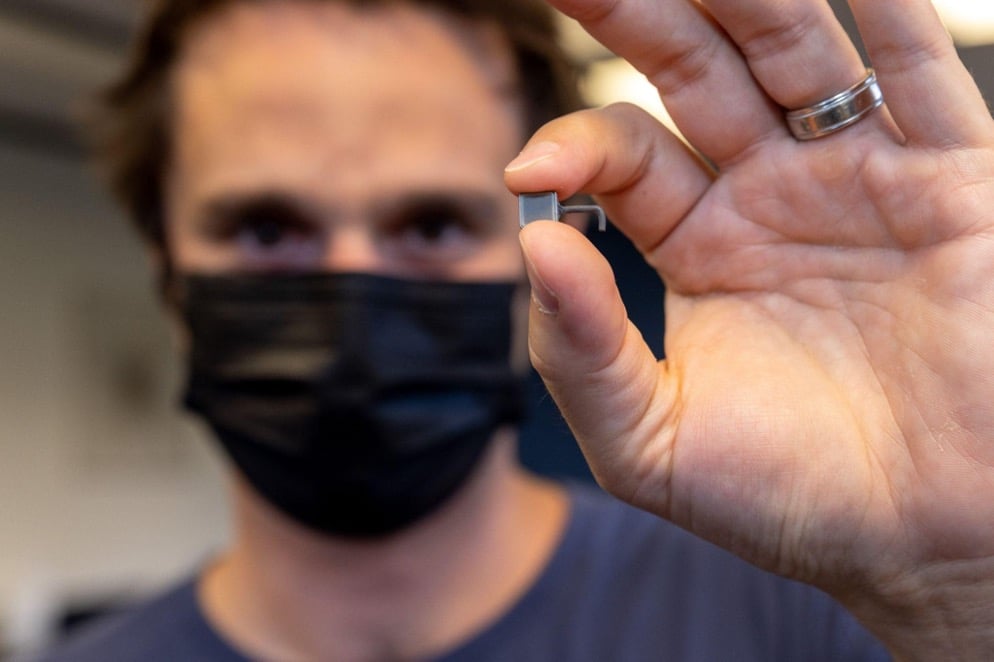 Are you interested in connecting your brain to the cloud? I am.

Imagine being able to “think and Google”… or control a robotic avatar with just your thoughts… or have the power of telepathy with other individuals connected to the same cloud?

This may sound like science fiction, but it’s almost here.

The earliest uses of this “brain-computer Interface” technology will be helping those with spinal cord injuries who have lost movement or perception. But it’s the longer-term potential of this Moonshot that truly inspires me.

Recently, I sat down with Dr. Matt Angle, CEO of Paradromics.

I was blown away.

Paradromics is on a mission to create high data rate brain-computer interfaces (BCIs), allowing us to tackle unmet medical needs.

Paradromics is playing on the edge of science and science fiction.

It’s gotten a lot of attention, especially when it impressed the world with its demonstration of a 9-year-old monkey using Neuralink brain implants to play a game of Pong using only its thoughts.

But by my evaluation, Paradromics is years ahead of Neuralink and has created an implantable system that can translate between bioelectric and digital signals, and act as a means to connect living brains with computational clouds.

In today’s blog, I’m going to give you an overview of Paradromics, how their technology works, and what this means for the future of BCIs and medicine.

NOTE: Tracking the latest developments in BCIs and other exponential tech is a key focus of my year-round Mastermind and Executive Program Abundance360.

Paradromics is a game-changing company whose Moonshot is to create the next generation brain-computer interfaces that will help people with disorders ranging from paralysis to speech impediments.

In success, it will bring back vision to the blind... allow paraplegics to walk again, and give those with a loss of sensation the ability to feel again. It’s almost biblical in nature.

But before we take a deep dive into the company’s technology, let’s start with the visionary CEO and Co-Founder of Paradromics, Dr. Matt Angle. Matt completed his graduate studies at the Max Planck Institute for Medical Research in Germany. His postdoctoral work at Stanford University was focused on the design of novel interfaces between nanomaterials and cells, especially in the field of neuroscience.

As a biologist, Angle was always fascinated with neuroscience because he believed it to be the technological frontier of this generation. But rather than using a microscope to look in detail at what’s in front of us, he prefers the Moonshot approach––using similar technology to turn the microscope into a telescope and look at bigger and newer things.

And he’s done just that with Paradromics.

HOW EXACTLY DOES PARADROMICS WORK? 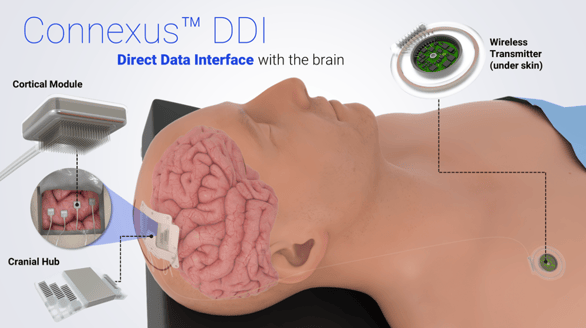 Paradromics’ implantable brain-computer interfaces (BCIs) use electronic circuits placed under the skull and on the surface of the brain to interface with the neurons in your brain.

Our brains “think” via electrical impulses––using neurons and synapses––in a vast network that together help process sensory signals (e.g., from your eyes and ears), command motor function (e.g., to your arms and legs), and store your memories.

Your brain is made of about 85 billion neurons. Each neuron is able to send an electrical impulse along the length of its axon and through to the synapses. From a data perspective, each time a neuron fires, it transmits a signal called an action potential.

What surprises most people is that while we think our brains are very fast, the processing speed of a neuron is actually quite slow. Neurons transmit the equivalent of 100 bits per second. If you were building a circuit to help someone control a prosthetic arm, the data rate needed is only about 15 bits per second.

Let’s compare this to what Paradromics has built. 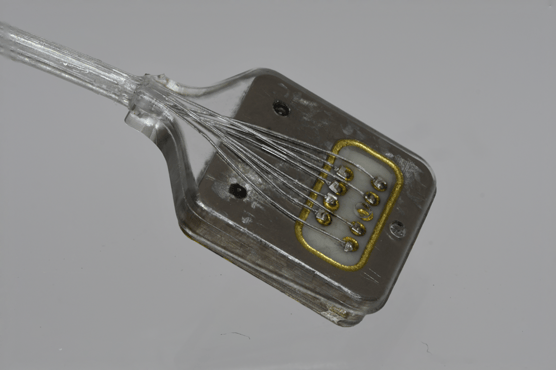 The company’s implantable device is a 1 cm square chip that consists of 1,600 Platinum-iridium microwires protruding in an array from one side of the chip.

This “brain chip” is placed in the layer between the pia and dura mater––protective membranes that overlay the brain.

When the chip is placed onto the brain, those 1,600 Platinum-iridium microwires penetrate only 1.5 mm deep into the neocortex.

These chips transmit data into and out of the upper layer of the brain, and then transport the data to a module that is implanted just below your skin on the subject’s chest. The module provides power, communications, storage, and compute to the Paradromics system. Because everything lies just under the skin, no one would know you have an implanted brain chip.

Best yet, the platform is SCALABLE. In fact, Paradromics’ first prototype device has already demonstrated electrical recording from over 30,000 electrode channels in the sheep cortex.

When will we see this in humans?

They are on track to reach humans in early 2023 with hopes to improve the lives of people with severe paralysis first, restoring communication through text, cursor, and speech.

So, what’s next for Paradromics?

Angle sees Paradromics targeting the visual cortex and auditory cortex to restore vision and hearing to the sensory impaired. The company will even try to understand mental health at a much more granular level to identify pathological patterns of brain activity.

Paradromics will fundamentally change the definition of what’s possible.

IMPLICATIONS FOR THE FUTURE OF BCI

Up until today, I had been carefully watching Neuralink as the leading company in implantable BCI technology, but I’m now clear that Paradromics has taken the lead in the race to high-bandwidth BCI.

In the not-too-distant future, companies like Paradromics could potentially use BCIs to cure neuro-degenerative diseases, enhance memory, enhance meditation, improve sleep, or treat depression. After all, it’s all about your neurochemistry and once you can dial that up or down, it gives you command override.

And what if we apply these same technologies beyond the medical field?

Imagine nonverbal communication between you and anyone else with a Paradromics implant? A tech-mediated form of telepathy. Or the ability to think of a question and retrieve the answer from Google?

Or ultimately, the ability to interface with a remote robot (avatar), moving its limbs by thinking, and feeling and seeing through its senses...

The future of BCIs is exponential and accelerating.

My friend, mentor, and Singularity University co-founder, Ray Kurzweil, predicts that we’ll have seamless, high-bandwidth connectivity between your brain and the cloud by the early to mid 2030’s… say 2033.

Paradromics CEO Dr. Angle believes that this vision could be achieved this decade.

The power of converging brain science, AI, computation, and robotics is staggering. And the implications are far reaching.

Elon expressed his rationale for starting Neuralink as a means to enable humans and machines to merge, as a way to potentially overcome the threat of runaway super AI intelligence. "I created [Neuralink] specifically to address the A.I. symbiosis problem, which I think is an existential threat," Musk said.

In my latest book, The Future Is Faster Than You Think, I wrote about the potential of a “Meta-Intelligence.” What happens when you’re able to connect the minds and thoughts of millions of individuals, perhaps billions? What level of consciousness might then be achieved?

There’s never been a more exciting time to get involved. Remember: “the best way to predict the future is to create it yourself!”

Would you like to learn more about and leverage the latest developments in exponential tech to transform your business?

How to Create Your Tribe

How to Create a Moonshot Culture