How to Launch Your BOLD Idea (Super-credibility)

How you launch your next BOLD idea is just as important as the idea itself.

Today, I want to talk about something that doesn’t get enough attention from many entrepreneurs … an idea that has changed my life.

It’s called giving birth to your big idea, product, or service “above the line of super-credibility.”

This is one of the most important strategies that any entrepreneur can use in pursuing their Moonshots. 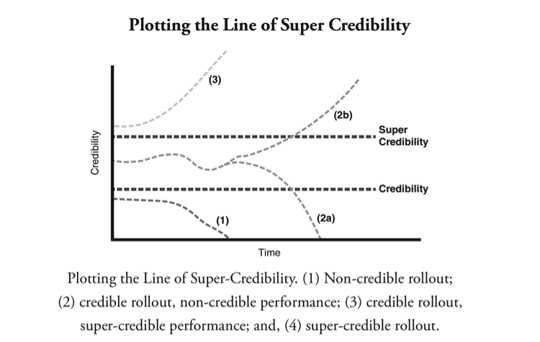 So what exactly is the line of super-credibility?

Let me explain: In each of our minds, we instinctively draw a line of credibility.

When you first hear a new idea, you place it above or below this line. If you place the idea below this line, you’ll likely dismiss it out of hand immediately--you might even think it’s ridiculous.

If you place the idea above this line, you’re probably willing to give it the benefit of the doubt. You might even follow the idea over time and continue to make serial judgements about it. If the idea does well, it will grow more and more credible in your mind.

So what you ask? What does it matter how credible your idea is in the minds of those around you? Ultimately it will determine whether they invest in your company or whether they come work for you.

Take a minute to think about how you’ve reacted to ideas in the past. How would you feel if your 17-year-old neighbor told you he was planning a mission to Mars? What if it was me who told you that? What if you learned one morning that Elon Musk, Jeff Bezos, and Richard Branson had teamed up for a mission to Mars in the next 2 years?

Now, there’s another line that we have in our minds: the line of super-credibility.

When a new idea or project is born above this line, you accept it immediately and think, “Wow, that’s amazing! How can I get involved?” The idea is so convincing, so credible, that your mind accepts it as fact and your focus shifts from probabilities to implications (such as the case with Musk, Bezos and Branson).

LAUNCHING THE FIRST XPRIZE IN A SUPER-CREDIBLE WAY

When I announced the $10M Ansari XPRIZE for Spaceflight under the Gateway Arch in St. Louis back in 1996, I didn’t have the $10M in prize money nor did I have any teams to participate in the competition.

But I knew it was really important for me to launch the project above the line of super-credibility.

So, as I was announcing the project I had on stage behind me not one astronaut, but twenty, including Buzz Aldrin of the Apollo 11 mission to the Moon. I brought Erik Lindbergh on stage alongside me, the grandson of Charles Lindbergh, as well as Dan Goldin, the NASA Administrator. It was a virtual who's who in the space business standing beside me.

When I announced this idea for the Ansari XPRIZE, even though I didn’t yet have the money or the teams, it was in such a super-credible fashion that landed it on the front-page of newspapers around the world.

When you’re coming up with your big, BOLD idea--your Moonshot--make sure you launch it above the line of super-credibility.

It will change the way the world thinks about you, your idea, and how much they believe in it.

Here are a few other lessons from my experience of launching multiple super-credible projects: