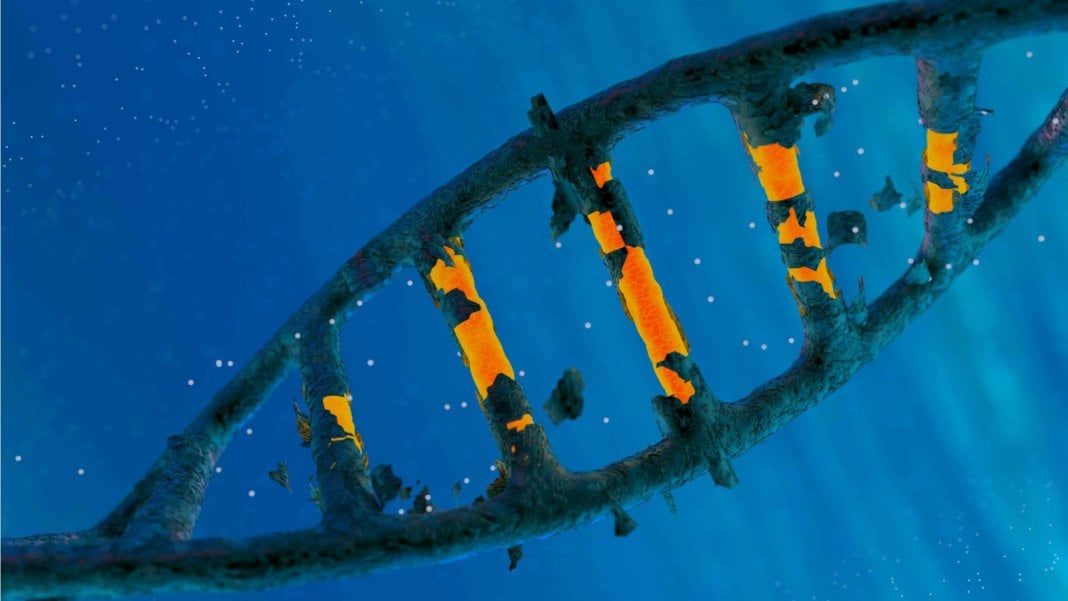 How soon will your food be genetically engineered to match your DNA profile? Can gene editing enable the treatment of complex disorders like aging? How might technologies like “gene drives” be used to eradicate deadly, mosquito-borne illnesses, or to fight antibiotic resistance?

CRISPR—short for Clustered Regularly Interspaced Short Palindromic Repeats—is a transformative gene-editing tool that will disrupt a range of industries within the coming decades: from genetic diseases and agriculture to the de-extinction of lost species and the extension of the human healthspan.

CRISPR acts like a pair of genetic scissors that can insert, repair, and edit individual genes with extraordinary precision, allowing researchers to easily and cheaply rewrite the code of LIFE.

Think swapping letters in a word processor—except the role played by each letter is far larger, with misspellings resulting in new organisms.

Humans, for example, share a whopping 99% of their DNA with chimps.

At least 10,000 human diseases owe to just one faulty gene.

Because of continually evolving versions of CRISPR and other gene-editing technologies, families will soon be able permanently cure these inheritable diseases, rather than just treat the symptoms. In some ways, this has biblical implications.

Today, sickle cell disease affects millions of patients worldwide, leading to the slow and painful death of each organ, all because of a single genetic mutation. The first sickle cell gene therapy was successfully administered in 2020, and has already changed the lives of countless patients, with some claiming complete remission.

But with a price tag of roughly $1 million per gene therapy today, and the systemic effects of targeted gene editing still largely unknown, the true power of CRISPR is yet to be unlocked.

This Metatrend is driven by the convergence of next-generation sequencing (NGS), CRISPR, gene-therapy delivery vehicles such as adeno-associated viruses (AAV), the rise of personalized medicine, and the AI-led translation of significant portions of the clinical R&D process into zeroes and ones.

In today’s blog, we’ll zoom in on the civilization-changing power of CRISPR, discuss the incredible mission of Colossal Biosciences (led by Ben Lamm and Dr. George Church), and share 3 ways emerging biotechnologies will disrupt the existing sick-care system and change YOUR life in the coming decade.

(This blog is written by Peter H. Diamandis, MD and Raiany Romanni)

Gene editing evokes images of both bliss and dystopia.

If genetic engineering proves safe and effective, it could treat, prevent, and eventually reverse all monogenic and all gene-mediated, age-related diseases.

If it fails, it could negatively shape the future of humanity in unpredicted ways.

Detractors claim germline editing (where genetic changes are heritable) could irreversibly transform our species, with unknown downstream consequences. As it exists today, gene editing is costly, with somatic gene therapies (treating the cells of your body, without affecting your future offspring) delivering reasonably high safety profiles, but doing so in a fashion that remains unavailable in most parts of the world.

Proponents suggest that somatic gene editing will soon become sufficiently advanced and demonetized to make a huge impact in medicine. For diseases that cannot be treated or prevented somatically, increased precision and better comprehension of genetic penetrance will ensure that even germline edits will one day be reversible by additional germline edits.

Some, including bioethicist Julian Savulescu, advocate for the development of biotechnologies that diminish human suffering, whether or not they address an official disease. (Think aging.)

Others, like physician and ethicist Leon Kass, claim the role of traditional medicine is not to augment humans considered healthy today, but to treat textbook illnesses.

What neither group can afford to ignore is the fact that while concepts of disease shift constantly, gene therapies are here to stay.

For example, last month a new CRISPR-based tool called “base editing” offered life-saving results to a 13-year-old girl whose leukemia was incurable by any traditional therapy.

This all-new technique, which used base-edited T-cells, allowed scientists to quickly alter a single DNA base (think changing the chemical letter G to A), offering Alyssa and her family a degree of hope that was previously unthinkable.

Another exciting example is a CRISPR edit injected into your body that permanently modifies the PCSK9 gene in your liver. This gene produces a protein responsible for producing LDL (the “bad-cholesterol”) in your bloodstream. A single injection has the potential to ultimately prevent heart disease and stroke, the number one and number three major killers in humans.

PCSK9 therapies durably lower the cholesterol of patients born with an inherited condition (hypercholesteremia) that makes them prone to heart attacks. And because 1 in 5 deaths in the US are due to heart disease, this therapy could lastingly transform the American health system.

Every aspect of the $4-trillion-dollar US annual health spend will be upturned by the imminent arrival of effective and competitively priced gene therapies.

Multi-factorial genetic conditions, like aging, will increasingly be perceived as a solvable medical condition, and a confluence of parallel innovations will increase the precision and scope of traditional medicine.

How will these technologies benefit you? How might it transform your business and industry? If you’re a wealth advisor, will you counsel you clients to plan for an age of 100 years-old instead of just 85?

3 WAYS CRISPR WILL CHANGE YOUR LIFE

Nutrition has played a significant role in the history of Homo sapiens, at least partially enabling the development of our unique brain structure. In the future, your food will be designed just for you, and this will have far-reaching consequences on our medical systems.

If you are allergic to shellfish, then you will get to eat prawns genetically engineered not to sicken you. If your personal AI assistant says your genes don’t agree with the taste of cilantro, then your tacos may be CRISPR-engineered to match your DNA profile.

This shift toward “precision nutrition” holds the potential to mitigate mental health illnesses, give us energy when needed, improve our sleep, and ultimately make us more productive and happier.

Today, nearly 90% of all deaths in the developed world are due to age-related decline.

The US spends almost half its federal budget on adults aged 65 and older every year—but very little in the way of preventative medicine.

Patients suffering from monogenic diseases like hemophilia and Huntington’s disease will be the first to benefit from gene therapies.

But there is no reason why multi-factorial genetic conditions, like aging, should remain incurable in this century.

New CRISPR systems allow for the increasingly precise targeting of cancer-causing viruses and RNA from cancer cells—and since some 96% of all cancers happen to patients aged 35 or older, a growing number of researchers have been using gene-editing tools to correct the 9 hallmarks of aging instead.

The major risk factor for neurodegenerative and inflammatory diseases, too, is aging.

And if scientists are successful in understanding the complex mechanisms of genomic instability and epigenetic alterations, these gains will quickly translate into other industries—like space, where high-energy radiation and low gravity produce results remarkably similar to aging on astronauts’ health.

The COVID-19 vaccines were produced at historically low costs and unprecedented speed, in good part thanks to advances in gene editing.

In the future, CRISPR may be used not only to respond to pandemics, but also to prevent them.

Mosquito-borne illnesses may soon become preventable via species-wide gene editing, as researchers grow increasingly confident that correcting the genome of mosquitoes could lastingly improve the health systems of countries like Sierra Leone, where thousands of deaths by malaria are reported each year.

Of course, new diseases will continue to emerge. However, it’s our hope and belief that the speed and agility with which science responds to these diseases will rapidly accelerate. In 2020, the scientific community was able to respond to a global pandemic within the span of several months. In 2050, we should do so far more quickly as new pathogens are detected and sequenced in the air filtration systems of airports and train stations, and new countermeasures are designed by AIs in seconds, and mass produced by robotic labs in hours versus months.

How does one reconstruct life? Can you bring back to life previously extinct species?

These are the question serial tech entrepreneur Ben Lamm and world-renowned geneticist Dr. George Church, alongside a stellar team of scientists at Colossal Biosciences, have set out to answer. (And they’re poised to do so, given Church’s notoriety as the founding father of genomics, and Lamm’s various successful startups.)

Why bother, you ask?

Because, as the company points out, up to 50% of all species may become extinct by 2050.

Humans are rapidly changing the environment, and not just for the better.

Colossal Biosciences aims to tackle this crisis via a two-pronged approach: engineer de-extinction, while also enabling the survival of a species that can mitigate anthropogenic (human-made) climate change.

By the end of this decade, the company intends to genetically resurrect the woolly mammoth. Renewing the presence of mammoths in the permafrost would turn wet tundra into dry grasslands, keeping temperatures cooler, and effectively restoring the environmental conditions needed to save countless other species on Earth.

Bringing the genetic code of the woolly mammoth back to life is especially compelling because all it would take is 500 to 1,000 mammoths to rewild a million square kilometers of the Arctic.

And, by the way, besides the woolly mammoth, Colossal has a long list of other extinct species they are working to return to Earth, including for example the dodo bird, the thylacine, and the dire wolf, just to name a few.

To scale their impact, the team at Colossal have been busy engineering a new software to make gene edits across species quicker and safer.

Last September, they spun out an independent company called Form Bio, whose software platform was designed so that anyone—no coding experience needed—can rapidly iterate on large datasets, workflows, and results.

With advanced machine learning and AI, these new platforms and gene-editing tools will increase the research output for all kinds of inheritable diseases, allowing for deeper, faster, and more precise insights into the blueprints of human health and disease.

Gene editing will reinvent life as we know it, and it is one of the topics we’ll dive into during the Abundance360 Summit in March.

Instead of fearing the continued advancement of biotechnologies, we should see them as an exceptional opportunity to unburden our medical systems, restore our natural habitats, and eventually IMPROVE them.

Malaria, though natural, is an unwelcome illness, and it should be within the purview of responsible science to prevent it.

Precise and affordable gene therapies will usher in a new era of personalized healthcare, where each therapy is designed for you—before you are diagnosed with a disease.

Medicine has a long history of once-frightening interventions—like heart transplants and IVF—that now help save, create, and improve billions of lives.

CRISPR and gene therapies are no different.

Are YOU ready to welcome the synthetic biology revolution?

In our next blog in the Metatrends series (#14 of 20 Metatrends), we’ll expand on the idea of Increased Human Healthspan.

Are you interested in what I think is *most important* for entrepreneurs, creatives, and leaders to understand over the next 10 years?