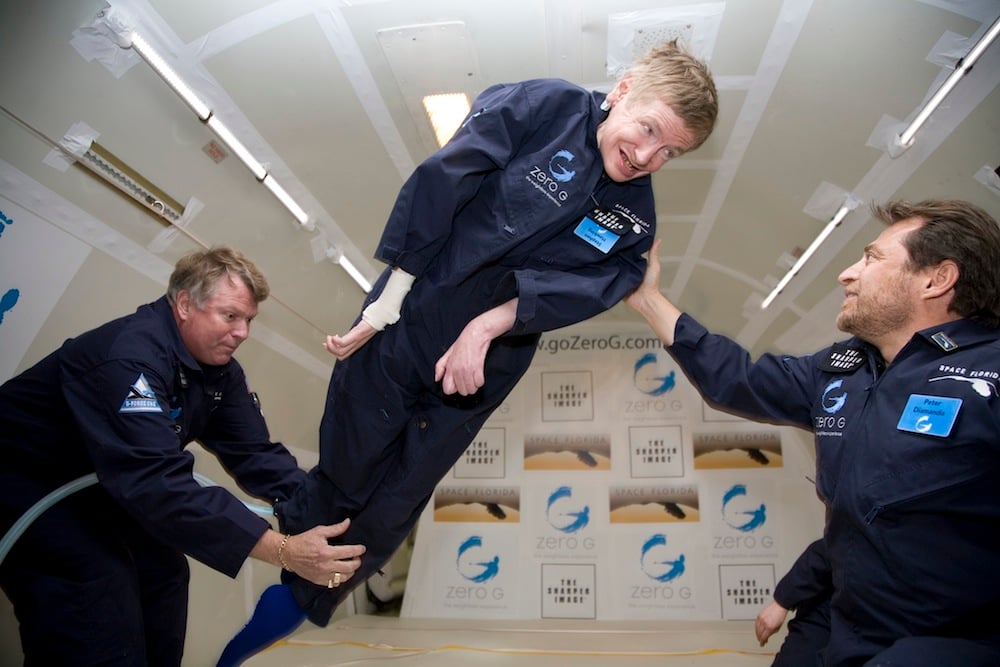 In 2007, I had the incredible opportunity to fly Professor Stephen Hawking, the world's expert in gravity, into zero gravity aboard a specially-modified Boeing 727-200 aircraft called G-FORCE ONE.

What made that flight extremely special was that Hawking's illness, a disease called ALS, had rendered him immobile and wheelchair-bound for more than 40 years.

It was one of the proudest moments of my life.

This blog is about that incredible story and the lessons learned in doing something hard and potentially dangerous.

It's also an invitation for you to join me on a flight into zero gravity this October in Los Angeles. More info here.

What is Zero G?

When I was in graduate school, I was desperate for a ride on NASA's zero gravity (parabolic flight) airplane.

I tried everything to get aboard (including volunteering as a medical guinea pig), but could never score a seat.

Finally I decided to take things into my own hands. Surely if I wanted to go so badly, others would want to do the same. Maybe there was a business to be created?

But getting the FAA's full permission to start this service for the public took a while -- 11 years, to be exact!

Over the next decade (1994 – 2004) we negotiated with an army of FAA bureaucrats who insisted that large-scale commercial zero g operations were not possible under existing FAA regulations… despite the fact that NASA had been operating parabolic flights for 40+ years.

FAA bureaucrats kept demanding that I show them where in the regulations it stated that a passenger aircraft could be allowed to fly parabolic arcs.

I had only one answer: "Show me where it says I can't?"

Quite simply, none of these mid-level FAA civil servants had the power to say yes.

Finally, a decade later, my request made it all the way up to the FAA administrator, Marion Blakey, an amazing woman who had the right answer: "Of course you should be able to do this—let's figure out how."

But one person was particularly special...

Back in 2007, I met Professor Hawking during conversations regarding the XPRIZE.

I learned in that first conversation about his interest in flying into space. He asked if I could get him on a sub-orbital flight.

I told him that I could not at the moment, but offered him instead a flight aboard G-FORCE ONE to experience parabolic flight. I also offered to make that flight a fundraising event in support of ALS research.

He accepted, and we issued a press release.

The next day I received a phone call from the FAA telling us that we were not allowed to fly Professor Hawking under our existing operating agreement that required we "." And according to the FAA, Hawking, being totally paralyzed and wheelchair bound, did not qualify.

This proclamation by the FAA infuriated me.

After all, I had fought for 10 years to get permission to fly "the public" into weightlessness. Flying people like Hawking was why I founded Zero-G.

After the immediate frustration, I had the presence of mind to ask a key question of the FAA: “Who determines whether Prof. Hawking is able-bodied?”

The answer was: "I guess it would probably be Professor Hawking's physicians or space-medical specialists."

That answer was good news.

Next, I purchased a malpractice insurance policy for a few key physicians, and obtained from them three signed letters of support submitted to the FAA stating, "without question, that Hawking was able bodied for a zero g flight."

To maximize the chance of a safe flight, we set up an emergency room onboard G-FORCE ONE and supported Professor Hawking with four physicians and two nurses accompanying him on the trip (monitoring heart rate, respiration, blood pressure, etc.).

At the pre-flight press conference, we announced our intention to fly the Professor on a single 30-second parabola, and maybe, if everything went perfectly, a second arc.

At least that was the plan...

The first parabola went so smoothly, and Hawking was having such a great time, that we flew a second, and a third... and another and another.

In total, we made eight arcs with him aboard.

On the heels of this successful flight with Hawking showing a disabled individual could safely fly in Zero-G, I was very proud that we next had the amazing opportunity to fly six wheelchair-bound teenagers into zero gravity.

These were kids who had never walked a day in their lives, yet they got to soar like superman on their flight.

Perhaps the most important lesson here is that of Passion and Grit.

No one would have endured an 11 year "startup" and the continual stream of "no's" unless my co-founders and I were so absolutely passionate about making this happen.

The complement to passion is grit, the absolute commitment to making it happen.

None of this would have happened without grit, creativity, and passion from our team.

Allow me to explain. When someone says no, it's often because they're not empowered to say yes.

In many organizations, the only person who can say yes to a difficult or non-standard situation is the person at the top the food chain, in my case the FAA Administrator.

If you believe something is your passion, your highest calling, don't give up when someone tells you that you can't do it. Simply gather yourself and find the next person up the hierarchy and begin again.

Another common fear is known as Murphy's Law – if anything can go wrong, it will go wrong.

With a mix of creativity, grit, and passion, you can accomplish almost anything you want.

WILL YOU Fly with Me in Zero-G?

On October 24, 2021, I'm hosting a ZERO-G flight out of Los Angeles onboard our specially modified Boeing 727-200 aircraft G-FORCE ONE. 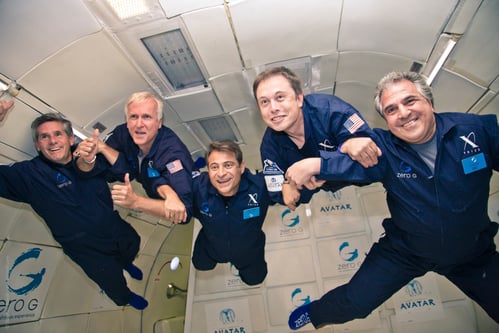 During the flight, we'll experience 15 parabolic maneuvers, providing 25 to 30 seconds of pure weightlessness per arc.

It's going to be quite an adventure… here's what to expect: