The World Is (Still) Better Than You Think

Your mindset matters — now more than ever.

We are in the midst of a drug epidemic.

The drug? Negative news. The drug pushers? The media.

As I wrote in Abundance: The Future is Better Than You Think, we pay 10x more attention to negative news than positive news.

We are being barraged with negative news on every device. This constant onslaught distorts your perspective on the future, and inhibits your ability to make a positive impact.

In this blog, I’ll share new “evidence for abundance” -- charts and data that show the world is getting better. I’ll also share positive news and technological breakthroughs, all of which occurred in 2017 so far.

Note: This isn’t about ignoring or minimizing the major issues we still face around the world. It’s about countering our romanticized views of the world in centuries past with data.

My hope is that you’re able to see the world as it is — a world that is still getting better. My goal here is to help you protect your abundance mindset despite this barrage of negative news.

If you have a negative-minded person in your life, forward this blog to them so they can look at the actual data.

The first area to explore is our global economy. Over the last 200 years, the world’s GDP has skyrocketed 100-fold. Humankind has never been more prosperous and productive. 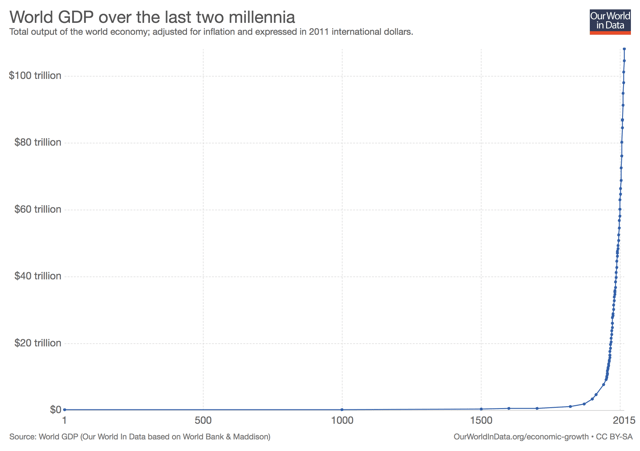 The graph above depicts the economic output per person around the world over the last 2,000 years. Here we see exponential growth independent of war, famine or disease.

Technology drove much of this economic growth, and there’s no signs of slowing.

Banking the Unbanked: One especially promising area of economic growth involves empowering the “unbanked” — the 2 billion people worldwide who lack access to a bank account or financial institution via a digital device. In September 2017, the government of Finland announced a partnership with MONI to create a digital money system for refugees.

The system effectively eliminates some of the logistical barriers to financial transactions, enabling displaced people to participate in the economy and rebuild their lives.

Refugees will be able to loan money to friends, receive paychecks and access funds using prepaid debit cards linked to digital identities on the blockchain -- without a bank.

Blockchain Technology & Government: Governments are investing aggressively in digitization themselves. The small country of Estonia, for example, already has an e-Residency program. The digital citizenship lets residents get government services and even start companies in the EU without ever traveling or living there.

In late August 2017, Kaspar Korjus, who heads up that e-Residency program, revealed the Estonian government’s exploration of creating an initial coin offering (ICO) and issuing crypto tokens to citizens to raise government funds.

That same month, the Chinese government announced its intent to use blockchain technology for collecting taxes and issuing invoices. This builds on previous experiments China’s central bank is conducting with its own cryptocurrency.

No matter where in the world you are, mortality rates have dropped precipitously over the last 300 years. 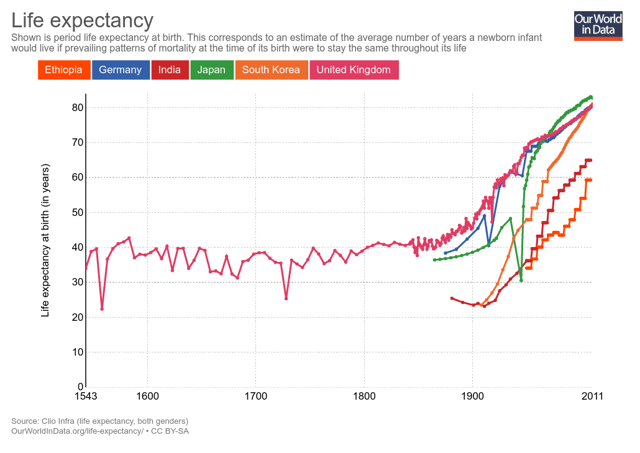 I share the following graph because, by the numbers, teen girls who have babies will have a harder life than their peers who delay motherhood.

As the U.S. Department of Health & Human Services notes, they’re more likely to dropout of high school, rely on public assistance, and have children with “poorer educational, behavioral and health outcomes over the course of their life than kids born to older parents.”

Since these statistics were first compiled in 1991, teen births have dropped 67 percent. 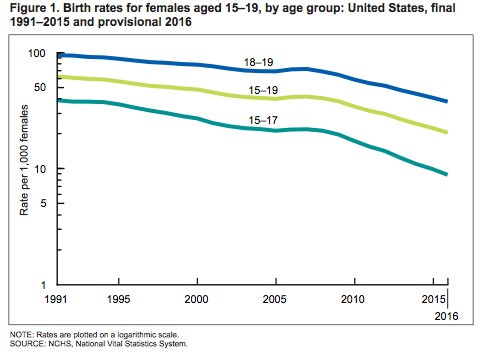 As exponential technologies continue to advance, we’ll see even more healthcare breakthroughs. Here’s a sampling from this year:

Exponential Tech Impact on Health: Most exciting these days is the tremendous impact that exponential technologies are having on Health.

Thirty years ago, the world signed the Montreal Protocol to prevent the depletion of the Ozone Layer. Today, the U.S. Environmental Protection Agency (EPA) credits that agreement with preventing an estimated 280 million additional cases of skin cancer, 45 million cataracts, and 1.5 million skin cancer deaths between its signing in 1987 and the year 2050. Without the Montreal Protocol, the planet would have been about 4 degrees warmer by 2050 (...resulting in more extreme weather events like droughts, floods and hurricanes).

As the graph below clearly depicts, the global annual death rate from natural disasters has plummeted over the past century. 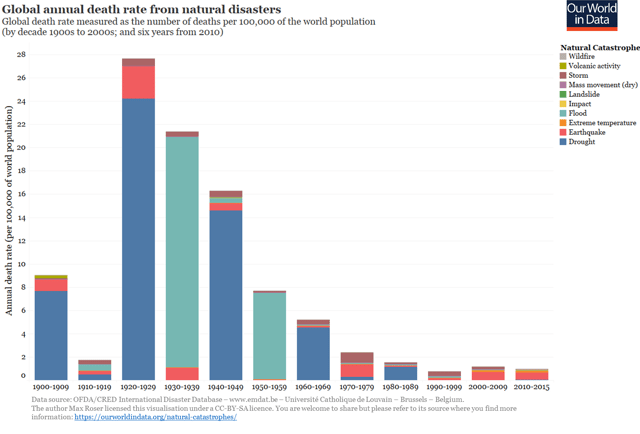 Why has this happened?  It’s the impact of exponential technologies (satellites, smart sensors, networks, machine learning), which enable humans to better image, predict and model disasters. These models provide early warning systems, enabling citizens to flee to safety and for first responders to send supplies and food to remote areas in time.

Drones & the Environment: Previously, animals were counted manually by researchers who had to spot them from helicopter or prepositioned camera footage. Now, a drone captures footage, the machine learning system counts different types of animals, and human volunteers help train the algorithm by verifying detections.

And in Bengaluru, researchers at the Indian Institute of Science are fighting deforestation with camera-equipped drones that drop seeds in areas they otherwise wouldn’t be able to explore. Their goal is to seed 10,000 acres in the region.

What becomes possible when thousands of teams — not simply individuals and a handful of research teams — leverage these tools to protect the environment?

A key measure of economic growth, living standards and poverty alleviation is access to electricity.

Take a look at the chart below to see how various regions of the world are meeting their energy needs. 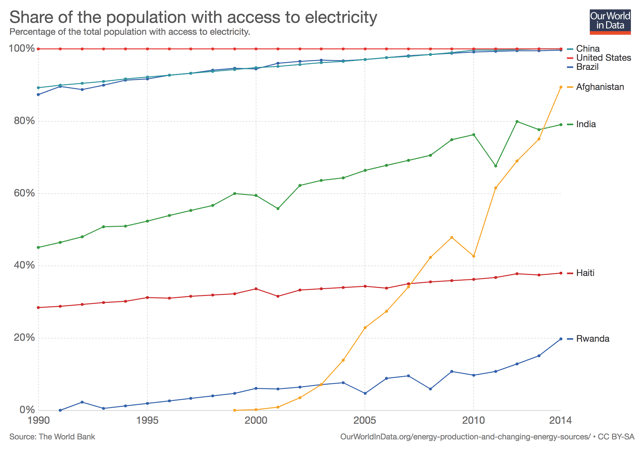 Here too, we’re making great progress. In 2016, solar power grew faster than any other fuel source for the first time ever. Around the world, solar prices are still dropping.

The latest forecast from GTM Research reports prices of $2.07 per watt in Japan to $.65 per watt in India, with prices dropping across hard and soft costs. 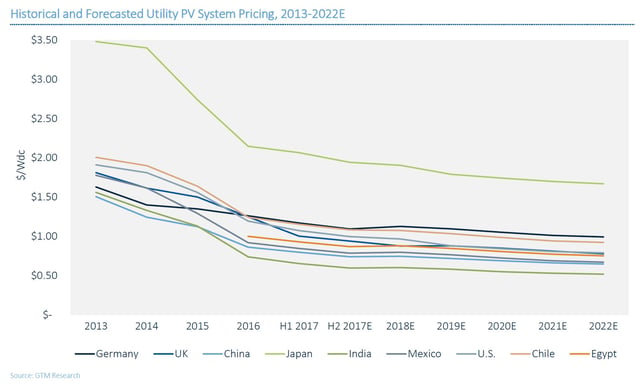 In 2017 alone, we saw wind power become cheaper than nuclear in the U.K., with the cost of subsidies slashed in half since 2015.

As the BBC reports, during the U.K.’s 2015 subsidy auction, “offshore wind farm projects won subsidies between £114 and £120 per megawatt hour.” Just two years later, two firms committed to a guaranteed price of £57.50 per megawatt hour.

Looking stateside, the U.S. Department of Energy announced in September 2017 that utility-scale solar has officially hit its 2020 cost targets three years early — with generation costs of $1 per watt and energy consumption costs of $0.06 per kilowatt-hour.

In 2017 alone, we saw wind power become cheaper than nuclear in the U.K., with the cost of subsidies slashed in half since 2015.

As the BBC reports, during the U.K.’s 2015 subsidy auction, “offshore wind farm projects won subsidies between £114 and £120 per megawatt hour.” Just two years later, two firms committed to a guaranteed price of £57.50 per megawatt hour.

Looking stateside, the U.S. Department of Energy announced in September 2017 that utility-scale solar has officially hit its 2020 cost targets three years early — with generation costs of $1 per watt and energy consumption costs of $0.06 per kilowatt-hour. 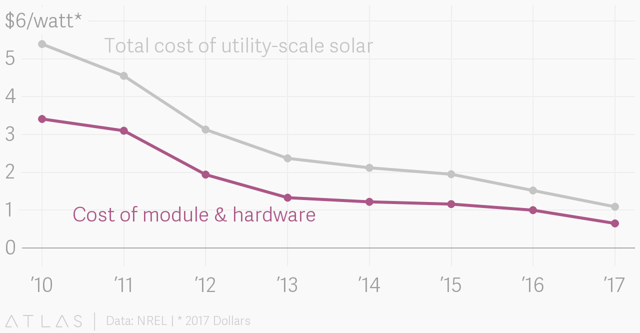 Despite the headlines, we’re making steady progress in the realm of food scarcity and hunger.

This graph features World Bank data on the percentage of the population that has an inadequate caloric intake. Globally, 18.6 percent of the population was undernourished in 1991; by 2015, it dropped to 10.8 percent.

Prevalence of Undernourishment in Developing Countries 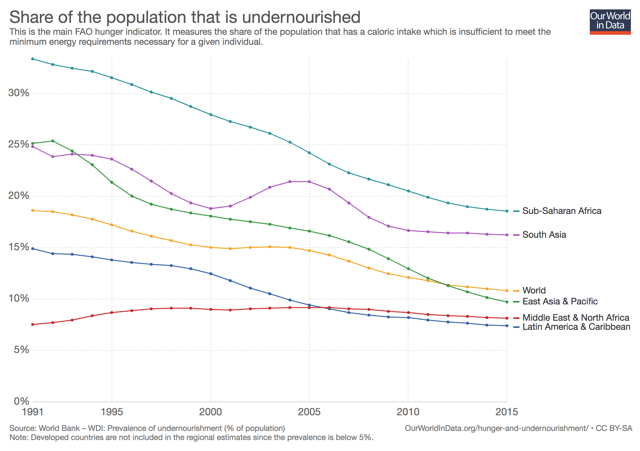 Looking at the data, we truly live in the most exciting time to be alive.

And if your mindset enables you to see problems as opportunities, the future is even more exciting than the present.