7 Business Models for the Decade Ahead 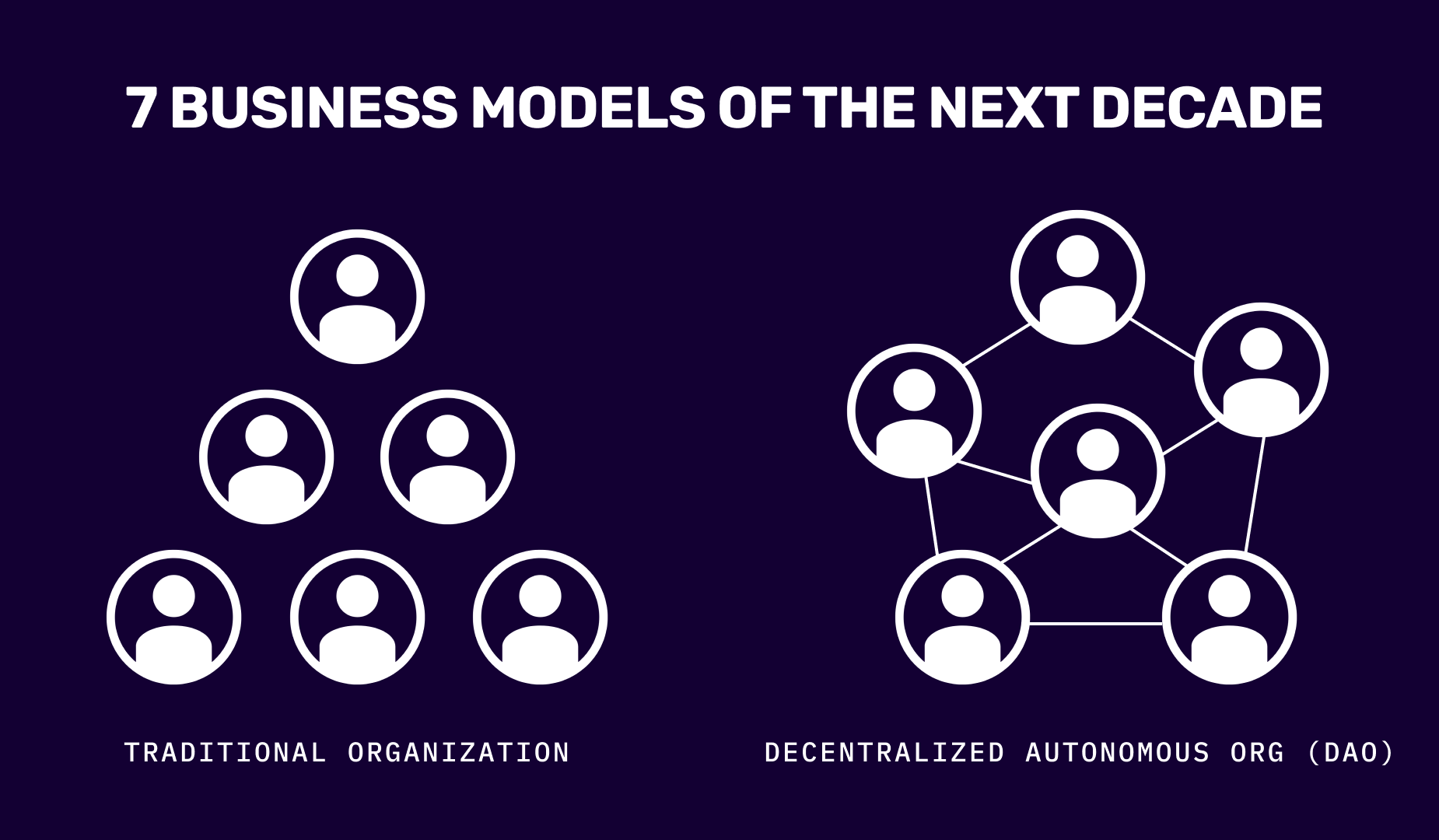 Some of the most potent innovation taking place today does not involve breakthrough technologies…. but rather the creation of fundamentally new business models.

For most of history, these models were remarkably stable, dominated by a few key ideas, upgraded by a few major variations on these themes.

In the 1920s, it was the “bait and hook” model, where customers are lured in with a low-cost initial product (the bait: a free razor) and then forced to buy endless refills (the hook: blade refills).

In the 1950s, it was the “franchise model” pioneered by McDonald’s. Or take the 1960s, where we got “hypermarkets” like Walmart.

But with the internet’s arrival in the 1990s, business model reinvention entered a period of radical growth.

We are now seeing 7 emerging models slated to redefine business over the next few decades.

And today, while countless businesses are anchored by a mentality of maintaining—competing solely on operational execution—it is more vital than ever to leverage these business models for success in the 2020s.

Each is a revolutionary new way of creating value—each is a force for acceleration.

7 BUSINESS MODELS THAT WILL RULE THE NEXT DECADE

(1) The Crowd Economy: Crowdsourcing, crowdfunding, leveraged assets, and staff-on-demand—essentially, all the developments that leverage the billions of people already online and the billions coming online.

All have revolutionized the way we do business. Just consider leveraged assets, like Uber’s vehicles and Airbnb’s rooms, which have allowed companies to scale at speed. These crowd economy models also lean on staff-on-demand, which provide a company with the agility needed to adapt to a rapidly changing environment. And it’s everything from micro-task laborers behind Amazon’s Mechanical Turk on the low end, to Kaggle’s data scientist-on-demand services on the high end.

Example: Airbnb has become the largest “hotel chain” in the world, yet it doesn’t own a single hotel room. Instead, it leverages (that is, rents out) the assets (spare bedrooms) of the crowd, with more than 7 million rooms, flats, and houses in over 100,000 cities across the globe.

(2) The Free / Data Economy: This is the platform version of the “bait and hook” model, essentially baiting the customer with free access to a cool service and then making money off the data gathered about that customer. It also includes all the developments spurred by the big data revolution, which is allowing us to exploit micro-demographics like never before.

Example: Facebook, Google, Twitter—there’s a reason this model has transformed dorm room startups into global superpowers. Google’s search queries per day have risen from 500,000 in 1999, to 200 million in 2004, to 3 billion in 2011, to 5.6 billion today. While more users are becoming aware of the valuable data they exchange in return for Google’s “free” search service, this tried-and-true model will likely continue to succeed in the 2020s.

(3) The Smartness Economy: In the late 1800s, if you wanted a good idea for a new business, all you needed was to take an existing tool, say a drill or a washboard, and add electricity to it—thus creating a power drill or a washing machine.

In the 2020s, Artificial Intelligence will be the electricity. In other words, take any existing tool, and add a layer of smartness. So, cell phones became smartphones and stereo speakers became smart speakers and cars become autonomous vehicles.

Example: We all know the big names incorporating Artificial Intelligence into their business models—from Amazon to Salesforce. But more AI startups arise each day: 1,000 AI-related companies in the US raised over $27B in venture capital in 2020, according to Pitchbook. One of the most highly valued of those companies is Scale AI, a data-labeling company that supports machine learning teams, currently valued at $7.3B. Expect AI to continue transforming most businesses in the 2020s.

Example: The Plastic Bank, founded in 2013, allows anyone to pick up waste plastic and drop it off at a “plastic bank.” The collector is then paid for the “trash” in anything from cash to WiFi time, while the plastic bank sorts the material and sells it to the appropriate recycler—thus closing an open loop in the life cycle of plastic.

(5) Decentralized Autonomous Organizations (DAOs): At the convergence of blockchain and Artificial Intelligence sits a radically new kind of company—one with no employees, no bosses, and nonstop production. A set of preprogrammed rules determines how the company operates, and computers do the rest. A fleet of autonomous taxis, for instance, with a blockchain-backed smart contracts layer, could run itself 24-7, including driving to the repair shop for maintenance, without any human involvement.

Example: While DAOs are just beginning to emerge, the platform DAOstack is working to provide these businesses with tools for success, including reliable crypto-economic incentives and decentralized governance protocols. DAOstack aims to create businesses where the only external influence is the customer.

(6) Multiple World Models: We no longer live in only one place. We have real-world personae and online personae, and this delocalized existence is only going to expand. With the rise of Augmented Reality and Virtual Reality, we’re introducing more layers to this equation. You’ll have avatars for work and avatars for play, and all of these versions of ourselves are opportunities for new businesses.

Example: Second Life, the very first virtual world created in 2003, gave rise to a multimillion-dollar economy. People were paying other people to design digital clothes and digital houses for their digital avatars. Every time we add a new layer to the digital strata, we’re also adding an entire economy built upon that layer, meaning we are now conducting our business in multiple worlds at once. Today we have all mastered Zoom, tomorrow we’ll be diving deep in the SpatialWeb, moving back and forth between multiple virtual worlds and our physical reality using technologies like Vatoms and Spatialweb.net to navigate the Metaverse.

(7) Transformation Economy: The Experience Economy was about the sharing of experiences—so Starbucks went from being a coffee franchise to a “third place.” That is, neither home nor work, but a “third place” in which to live your life. Buying a cup of coffee became an experience, a caffeinated theme park of sorts. The next iteration of this idea is the Transformation Economy, where you’re not just paying for an experience, you’re paying to have your life transformed by this experience.

Example: Early versions of this model can be seen in the rise of “transformational festivals” like Burning Man, or fitness companies like CrossFit, where the experience is generally bad (you work out in old warehouses), but the transformation is great (the person you become after three months of working out in those warehouses). Consumers are no longer searching for merely pleasurable experiences—they are looking for challenges that transform. This is also where technologies like Spatialweb.net and Dreamscape will help to digitize, dematerialize, and democratize such experiences everywhere on the planet.

What all this tells us is that business as usual is becoming business unusual.

And for existing companies, as Harvard’s Clayton Christensen explained, this is no longer optional: “Most [organizations] think the key to growth is developing new technologies and products. But often this is not so. To unlock the next wave of growth, companies must embed these innovations in a disruptive new business model.”

And for those of us on the outside of these disruptive models, our experience will be better, cheaper, faster.

Cheaper is obvious. With demonetization running rampant, customers—and that means all of us—are expecting more for less.

But the real shift is the final shift: faster. New business models are no longer forces for stability and security. To compete in today’s accelerated climate, these models are designed for speed and agility.

Most importantly, none of this is in any danger of slowing down.

10 Metatrends for YOUR Next Startup