The MIT Lab That's Teaching Phones to Build Themselves

What it is: Skylar Tibbits of the MIT Self-Assembly Lab has teamed up with design studio Marcelo Coelho to create cellphones that can build themselves -- no human intervention or advanced automation needed. Their rough prototype has six parts, and when placed into a tumbler, the phone can self-assemble in under a minute. The secret to attaching the parts and keeping them together is surprisingly simple: magnets of varying polarity.

Why it's important: This manufacturing approach is a cost-effective, fast and scalable alternative to factories manned by humans or robots. Tibbits also sees another compelling use: complete design freedom. "Imagine you take a circuit board and you have different logical building blocks and those logical building blocks can be tumbled around -- you can have different functionalities," he told Fast Company. | Join the Discussion

Ford to Ship Self-Driving Cars Without Steering Wheels, Brake, or Gas Pedals by 2021

What it is: Ford has officially announced the company's plan to deliver fully autonomous cars to consumers by 2021. These cars will be designed without steering wheels, brake pedals and gas pedals, making it a "full Level 4 self-driving" vehicle -- meaning human drivers aren't required. Ford will staff up for the effort by doubling employee numbers (to over 300) and expanding operations space in Palo Alto.

Why it's important: Peter recently wrote about the implications autonomous cars will have on a variety of industries, but especially the traditional automotive manufacturing industry. Ford's CEO hinted at the coming sea change, stating that the company was no longer "just an auto company, we're also a mobility company." Will Ford and other traditional automakers be able to implement these changes quickly enough to remain relevant? | Join the Discussion

Intel and Microsoft Are Teaming Up to Make Virtual Reality Ubiquitous

What it is: Intel recently unveiled Project Alloy, an open-source standalone virtual reality headset made in cooperation with Microsoft. Unlike competing headsets from Oculus and HTC, MIT Technology Review reports that Project Alloy lets users interact with virtual objects simply by reaching out -- no hand controllers necessary. Another fun user feature: Hold a real-life object in your hand, and the headset will generate that object in your virtual world.

Why it's important: To date, consumers only have a few standalone VR headsets to choose from, and their price range and user interface are prohibitive for mass adoption. Intel's decision to open-source its technology could signal that Virtual Reality is about to begin dematerializing (no need to tether to a computer) and demonetizing (anyone can download the files to create their own headset). | Join the Discussion

What it is: Uber plans to test fully autonomous Volvo XC90 sport utility vehicles in Pittsburgh in just a few weeks, making it the first to roll out self-driving cars for urban taxi use. Due to regulatory uncertainties and safety precautions for this pilot program, Uber will have a human driver in each Volvo, as well as a mandatory "opt in" from passengers to use the self-driving Uber cars.

Why it's important: One of the three forces Peter predicted could decrease the automotive marketplace by a factor of 10 or more is this introduction of "car as a service" using a fleet of self-driving vehicles. If regular autonomous Uber use ends up being 10x cheaper than the average ownership of a car in America today, will people living in areas that Uber serves ditch their cars and use the service (or others like it) as their primary transportation? | Join the Discussion 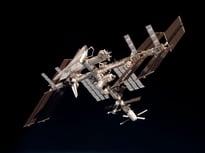 What it is: At a recent NASA press conference for its Journey to Mars mission, NASA Deputy Associate Administrator for Exploration Systems Development Bill Hill told the audience that NASA may relinquish ownership of the International Space Station. "NASA's trying to develop economic development in low-Earth-orbit," he said. "Ultimately, our desire is to hand the space station over to either a commercial entity or some other commercial capability so that research can continue in low-Earth orbit."

Why it's important: It's a long shot, but should NASA find a private buyer for the ISS, it could dramatically accelerate the pace of LEO research -- and the commercialization of space. | Join the Discussion

What it is: Aircraft manufacturer Airbus is planning to build a self-flying vehicle platform for both passenger and cargo transportation, used by companies such as Amazon. Airbus' ultimate use for the platform would be to ferry passengers using shared autonomous vehicles.

Why it's important: We've been promised flying cars for decades, but Airbus' involvement indicates the technology is closer than it's ever been. We know that industries like real estate, retail, airlines, hotels, energy, auto, and more will be heavily impacted by the introduction of autonomous vehicles. How will Aircraft's autonomous flying taxi platform complement (or compete with) the key players implementing self-driving cars? | Join the Discussion

What it is: Researchers at Tel Aviv University are experimenting how Virtual Reality integrated into a regular treadmill workout could help prevent older people from falling. The university's investigation stemmed from the idea that safely training motor and cognitive functions through video game-style Virtual Reality would effectively reduce an older adult's chance of falling.

Why it's important: We've seen virtual reality used to digitize, dematerialize and demonetize in-person training experiences ranging from sports training to PTSD therapy. If successful, this gamified workout could help older adults remain independent far longer than they would have otherwise. | Join the Discussion

What it is: University of Melbourne plant geneticists have developed a biofortified rice that contains 200% more iron and over 180% more zinc than conventionally bred rices. What's more, the biofortified rice doesn't have any downsides: it has the same yield as existing rice varieties, it won't cost any more for farmers to adopt, and it doesn't have any harmful effects on the soil or environment.

Why it's important: Dr. Alex Johnson, who led the research, says that they're working on introducing the biofortified rice into Bangladesh, where, as the University of Melbourne reports, "almost 80% of cultivated land is dedicated to rice, but where more than half of all children and 70% of women are iron deficient." In areas like Bangladesh where rice is a staple food, Johnson says that introducing biofortified rice "...should lead to healthier and more productive populations in the developing world, boosting local economics and eventually supporting more diverse and balanced diets." | Join the Discussion