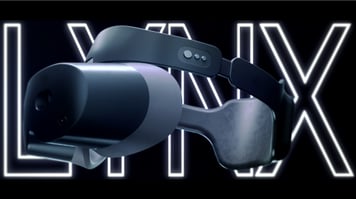 What it is: Earlier this week, French startup Lynx unveiled the R-1, a standalone mixed reality headset built for pass-through Augmented Reality and powered by Qualcomm’s new Snapdragon XR2 chip. The headset—aimed at enterprise users—has an occluded display (no light from the outside enters), but can achieve both augmented reality and virtual reality internal projections. As one of the first products to use Qualcomm’s powerful new Snapdragon XR2 chip, the headset powers six cameras for positional tracking, pass-through AR, and eye-tracking. Even in the absence of controllers, the standalone R-1 can seamlessly track hand positioning and movements. The R-1’s novel prism-like lens additionally makes it more compact than traditional XR lenses. Claiming a resolution of 1,600 × 1,600 in each eye and a 90-degree FOV, Lynx is on track to compete with Magic Leap and Microsoft Hololens, touting a $1,500 price tag and summer 2020 release date.

Why it’s important: Augmented reality (AR) is about to add a digital intelligence layer to our every surrounding, transforming retail, manufacturing, education, tourism, real estate, and almost every major industry that holds up our economy today. Just last year, the global augmented reality and virtual reality market hit a value of $814.7 billion, and it is only expected to continue surging at a 63% CAGR until 2025. In one of the greatest technological revolutions of this century, smartphones dematerialized cameras, stereos, video game consoles, TVs, GPS systems, calculators, paper, and even matchmaking as we knew it. AR glasses will soon perpetuate this, ultimately dematerializing the smartphone itself. We will no longer gaze into tiny, two-dimensional screens but rather see through a fully immersive, 3D interface.

What it is: Researchers from UC Davis have devised a mechanism that can allow solar panels to generate power 24 hours per day, including during nighttime conditions. Using a technique known as radiative cooling, the panels can generate up to a quarter of their daytime energy production at night, leading to an overall boost of about 12% in total energy production. According to one of the researchers, Jeremy Munday, "A regular solar cell generates power by absorbing sunlight, which causes a voltage to appear across the device and for current to flow. In these new devices, light is instead emitted and the current and voltage go in the opposite direction, but you still generate power. You have to use different materials, but the physics is the same."

Why it’s important: Thermoradiative cells are becoming more popular as a means of producing and capturing waste energy. Last year, Stanford University developed a similar system, using the heat imbalance between the Earth and the nighttime sky to generate electricity. This technology could become a key part of our energy infrastructure, as the researchers noted in their published paper: "Deep space offers an intriguing low-temperature thermal sink that has the potential to help provide electrical power at night and day through the clever use of photonics, optics, and materials science.” 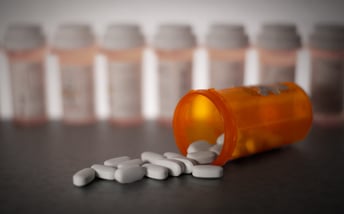 What it is: A drug designed by an AI algorithm is about to hit clinical trials for the first time. Known as DSP-1181, the drug was designed by AI systems (produced by biotech company Exscientia) and is intended to treat obsessive-compulsive disorder in patients. Exscientia CEO Andrew Hopkins said the trials were a "key milestone in drug discovery" and that "the beauty of the algorithm is that they are agnostic, so can be applied to any disease."

Why it’s important: Artificial Intelligence is slowly but surely permeating the medical field. While machine learning has already seen usage in delivering diagnoses and analyzing patient data, AI’s experimental application in the field of drug discovery promises a multi-billion-dollar market. Presently, it can take nearly a decade (if not more) for a novel drug to graduate from experimental candidate to commercialized patient prescription. AI-based drug discovery systems are slated to cut this time substantially. Case in point, Exscientia's systems took only about one year to design DSP-1181, whereas previously, a drug at this stage of development would have required nearly 4 and a half years. As pharmaceutical companies continue to witness this surge in speed and efficacy at the hands of machine learning, AI-driven drug discovery may rapidly become the new norm.

What it is: Taimba, a Kenyan B2B agri-tech startup, recently earned $277,000 in funding from Enviu and the DOEN Foundation. The cashless Taimba platform operates on mobile devices and connects rural small farmers with grocers, schools, restaurants, and hospitals. Currently, over 2,000 farmers use the platform to deliver fresh produce to 300 urban retailers. Taimba’s new round of equity and grant financing comes after a $100,000 Gray Matters Capital investment last year. Taimba will focus on integrating cooling machinery into its supply chain to preserve produce freshness, offering greater flexibility and stable supply for farmer resource demands. Enviu’s grant support will surely help the company achieve its expansion of product lines and markets.

The Future of Advertising