What it is: A few months ago, Tesla pushed out new radar processing technology to all vehicles equipped with its first generation Autopilot hardware, enabling a number of new safety features, such as the ability to see two vehicles in front of you. Since then, we've seen several examples of avoided collisions, but this dashcam footage of a Tesla predicting and avoiding a rollover collision in the Netherlands a couple weeks ago is especially chilling. As Electrek reports, "What is most impressive is that fact that we can clearly hear the Forward Collision Warning alert before the lead vehicle even applied the brake, which shows that the Autopilot wasn't only using the lead vehicle to plan the path, but also the vehicle in front of it -- the black SUV. The driver of the Tesla also reported that Autopilot started braking before he could apply the brakes himself."

Why it's important: Criticism of Tesla's Autopilot technology often focuses on its limitations and accidents. This visceral video turns the conversation in a more positive direction, highlighting how current self-driving technology can already outperform some human drivers. As we develop more sensors and incorporate more types of data, these autonomous driving algorithms will become increasingly impressive. | Join the Discussion

What it is: Using a technique based on protein self-assembly, researchers at Tufts have created materials out of silk fibroin, the protein that gives silk its durability. Ranging from the nano to micro-scale in size, these solids can be preprogrammed with biological, chemical or optical functions, such as changing color in response to stress or heating up in response to infrared light.

Why it's important: Because the methods here are water-based and fibroin is a biocompatible polymer, the applications are numerous, from orthopedic screws that release their own enzymes to building materials that respond to environmental stimuli. When materials are also sensors, we enable a true Internet of Everything. | Join the Discussion 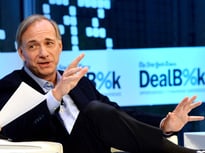 What it is: Using a system called the Systematized Intelligence Lab, headed up by IBM Watson's lead developer David Ferrucci, Bridgewater Associates plans to automate over 75% of its management decisions within five years. With over $160 billion in management, founder Ray Dalio said the firm wants to remove the emotional volatility from decisions like finding the right staff for a job, or ensuring the company continues to operate according to his principles in his absence.

Why it's important: Many, including the popular press, have assumed that AI would initially replace activities like manufacturing and trading. When we can create a comfortable human interface for a managerial Artificial Intelligence, look for truly exponential organizations to emerge, as entrepreneurs will be empowered to accomplish much more with much less. | Join the Discussion

What it is: Led by Hossam Haick at the Israel Institute of Technology, researchers have developed a breathalyzer that can diagnose up to 17 different diseases from a single breath. Using gold nanoparticles and carbon nanotubes, the device reacts with the 100 or so volatile compounds in our breath. Applying this technology to 1,400 patients suffering from a range of diseases from cancer to neurological disorders, the team used an artificial intelligence system to arrive at a signature for each disease.

Why it's important: New, surprising discoveries happen when breakthroughs from multiple disciplines converge. Here, advances in materials science and nanotechnology combine with Artificial Intelligence, machine learning and advances in our understanding of biomarkers. As sensor technology improves, and we're better able to process data in the cloud, we'll be able to diagnose and predict disease with unprecedented speed and accuracy. | Join the Discussion

What it is: Colorado startup MycoTechnology is working a way to maintain a product's taste while cutting back on its sugar content. Their approach consists of deploying invisible fungi molecules called mycelium that remain on a person's tastebuds while they chew food -- producing naturally occurring "bitter blockers" that other food companies commonly depend on sugar to mask. The molecules remain on the tongue for about 10 seconds, which is enough time to block the bitter flavors. MycoTechnology has a deal with GLG Life Tech, one of the biggest publicly traded producers of the zero-calorie sweetener stevia, which will enable mycelium to be used all over the world.

Why it's important: Evidence that as we're able to gather, analyze and combine more data, we're better equipped than ever to solve our biggest challenges in any area -- in this case, health and nutrition. The reason why sugar is added in such excessive quantities into our foods is to mask or hide the bitter qualities of that product. Without flavor defects such as bitterness, we can now create products that have drastically less to no sugar added. As added sugar consumption is linked to heart disease, obesity and a variety of other ailments, this breakthrough has significant implications for health and longevity. | Join the Discussion

What it is: Canada recently declared that all Canadians should be able to have broadband Internet with 50Mbps download speeds and 10Mbps uploads, including unlimited data options and the ability to access the Canadian Radio-Television and Telecommunications Commission (CRTC). Today, about 18% of Canadians -- 2 million households -- don't have access to this kind of high-speed Internet. The CRTC's goal is to take that number down to 10% by 2021, and ultimately down to zero in the next 10 to 15 years. This decision is part of the CRTC's federal government plan to spend $500 million over five years to improve infrastructure and accessibility for schools and hospitals.

Why it's important: Peter recently mentioned how we are hyperconnecting the world. In 2010, 1.8 billion people were connected. Today, that number is about 3 billion, and by 2022 to 2025, that number will expand to include every human on the planet, approaching 8 billion humans. Canada's declaration of broadband Internet being an essential technology -- effectively, a basic human right -- is proof of our world's exponential growth in connectivity. | Join the Discussion

What it is: A team of researchers from MIT's Computer Science and Artificial Intelligence Laboratory developed a software tool for people to design and optimize their own drones. The AI software tool works by allowing people to drag and drop standard drone components -- including propellers, support rods, and various body frames -- to build their own drone. Once users finalize their design, it gets processed by an algorithm that can optimize the drone for payload, cost and battery time within seconds. Although the team doesn't have plans to release or commercialize the product as of yet, they may launch an open-source version in the near future. In the longer term, the team hopes that custom drone design could play a role in the creation of unmanned aerial vehicles that can carry specialized payloads.

Why it's important: One of the top 10 tech trends Peter mentioned in his most recent tech blog is the emergence of drones and their transformation of humanity: "We are headed towards a world where autonomous drones will image the world at millimeter resolution, deliver products and packages, and transport humans to remote areas that were previously inaccessible by roads." With the customization of drones, this transformation could have an even larger impact than we imagined. | Join the Discussion

What it is: India's Prime Minister Narendra Modi recently launched a new e-payment system called Bharat Interface for Money (BHIM). Developed by the National Payments Corporation of India, the app uses the Unified Payments Interface (UPI) to simplify money transfer between banks by allowing payments to be sent to or received from a virtual address. India hopes the app's minimum functionality for cashless money transfers will encourage more people to start using it.

Why it's important: Because UPI-based apps enable quick money transfers across multiple banks, adoption of this technology could help India achieve a true cashless society. It's also a compelling case study into how governments can support technology innovation and adoption. | Join the Discussion