Dancing robotic warehouse shelves, snapping photos with simple finger frames, and the learning implications of 3D printing for dyslexics. These are just some of the inspiring innovations we curated in this week's edition of Abundance Insider.

What is this? Consider this a briefing of the week's most compelling tech developments, as uncovered by Peter and his team. In preparation for Abundance 360, Peter's mastermind for exponential entrepreneurs, our team shares breakthrough ideas and news items with each other and consider their implications for entrepreneurs.

What it is: Amazon's newest warehouse features robot-driven shelves, which rearrange themselves in neat rows or scoot themselves to human workers, who stack them with new products or retrieve goods for packaging. These robotic shelves increase overall productivity: instead of humans walking around stacking shelves or looking for the right product, the shelves come right to pickers and packers.

Why it's important: As Peter and Dan Sullivan discuss in their Exponential Wisdom podcast, unfair entrepreneurial advantages lie within human-technology teamwork. Amazon's warehouse is a glimpse into the future, where better computer chips, algorithms, smart sensors and actuators enable smarter, cheaper and safer robots.

What it is: Target Open House is a 3,500-square-foot pilot store that features a transparent house with smart devices in action. Projected silhouettes demonstrate how various devices -- linked together with an app called Yonomi -- fit into your daily life.

Why it's important: This concept demonstrates how brick-and-mortar retailers can compete by delivering a unique consumer experience. By transforming a storefront into a real-life digital playground, Target enables shoppers to interact with smart home products -- and actually visualize their utility in real-world situations -- in a way that they typically can't prior to purchase.

What it is: Google was recently awarded a patent for finger framing, which allows users to take photos of whatever you frame with your thumb and index fingers of each hand. The patent description ("head mounted device") hints that this functionality may go to Google Glass.

Why it's important: More evidence that computers and cameras are dematerializing into our clothing. With the continued improvement of sensors and chips, it won't be long until physical gestures like this are the default interface for all of our connected devices.

What it is: Google's deep learning algorithm, DeepStereo, analyzes two images of a scene to synthesize a third image from a different point of view. This enriches existing Google Street View data by showing us what the process of traveling or exploring would be like, step by step.

Why it's important: This algorithm enables faster, easier content generation for teleconferencing, virtual reality, cinematography and animation purposes. This is especially key for augmented reality and virtual reality, which will need a lot of content for mass consumer adoption. 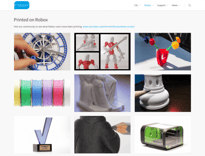 What it is: Chris Elsworthy, CEO of Robox 3D printers, discusses how 3D printers are an ideal learning tool for dyslexics, because they can explore mechanics, engineering and how things work without books. Elsworthy, who is also dyslexic, created Robox printers as an affordable, intuitive and space-friendly solution for children -- especially those with learning disorders -- to begin honing their creative abilities. He points out that unlike smartphones, tablets and laptops, which can isolate young children in a virtual world, 3D printing unites everyone in a self-made reality.

Why it's important: Language-based learning disabilities like dyslexia are fairly prevalent; in the U.S., it's estimated that 15% and 20% of the population has one. As 3D printers continue to get cheaper and better, their adoption will rise, and it won't feel far-fetched to see 3D printers as baby shower gifts. It gets really exciting when you consider the interface implications of converging exponential technologies like artificial intelligence and networks/sensors.

Can These Tiny Robots Teach Fourth Graders How To Code?

What it is: LocoRobo is a freewheeling toy android that teaches kids between 8 and 12 how to program in Python, C, MatLab or JavaScript's Node.js. There's a low barrier of entry: a smartphone interface lets users program simple actions for the robot. A companion Web interface lets students learn about the robot's sensors (accelerometer, gyroscope, ultrasonic sensors) and tinker with the code to enable additional functionality and movements.

Why it's important: Another potential transformation in education, thanks to converging exponential technologies. Simple user interfaces, cloud computing and robotics combine for a fun, easy and results-oriented student learning experience. This particular robot is designed to grow with the child, transforming an app and toy into a true teaching aid.

What it is: KAIST researchers have developed a power transfer technology that wirelessly charges mobile devices within 0.5 meters from the power source, in any direction and orientation, and without any kind of tethering. It can charge 30 smartphones with a power capacity of one watt each, or 5 laptops with 2.4 watts.

Why it's important: Current wireless power technologies still require the device to be on a charging pad. This technology makes location irrelevant. We don't know how long it will take before we can cut our charging cords for good, but one thing's for sure: when we can power every device and sensor without cords, we can transform every industry on the planet.

How the Internet is Becoming a Part of Us 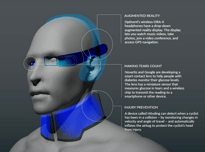 What it is: Powerful read from professor Yuval Noah Hariri from the Hebrew University of Jerusalem in which he notes that the merging of man and machine will be the "greatest evolution in biology." Hariri predicts that in the next 200 years, humans will evolve into "some idea of a divine being, either through biological manipulation or genetic engineering or by the creation of cyborgs, part organic, part non-organic." An accompanying graphic shows all the ways in which this "E-man" would leverage technology.

Why it's important: This is a fascinating look into the not-so-distant future, where ubiquitous nano-sensors, sand-grain-sized computers, mind-controlled browser interfaces, augmented reality, smart pills and ingestible health-monitoring chips enable users to upgrade themselves into truly superhuman beings.

What it is: In two separate experiments (one with monkey and one with rats), Duke University scientists have successfully linked together animals' brains to form a 'brain net' of direct communication. In both experiments, the animals joined cognitive forces: the monkeys synced brainwaves to control an avatar arm, while the rats collaboratively solved a simple weather forecasting problem that individual rats had difficulty completing. The system worked, even if one of the animals was temporarily distracted.

Why it's important: Besides creating a real-life Borg, the idea of creating networked "super-brains" has tremendous positive implications, especially in brain rehabilitation. Imagine healthy brains networked to that of a stroke patient to help retrain language abilities, or "organic computers" that link animals' brains to solve problems. 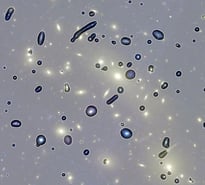 What it is: University of Hertfordshire computer scientists and astronomers have collaborated on an algorithm that can "see" and classify galaxies using data from the Hubble Space telescope. Using unsupervised machine learning, the technique is able to inspect data at very high rates of speed. "Our aim is to deploy this tool on the next generation of giant imaging surveys where no human, or even group of humans, could closely inspect every piece of data," said James Geach, Ph.D.

Why it's important: Peter has previously said that the crowd is the interim step before artificial intelligence comes online. This algorithm is evidence that Artificial Intelligence can begin taking on pattern recognition tasks that were once only feasible with human eyes: medical professionals spotting tumors, or security staff searching for suspicious items.

Know someone who would benefit from getting Abundance Insider?  Send them to this link to sign up.