Meet the Most Nimble-Fingered Robot Yet

What it is: University of California at Berkeley researchers developed a dexterous multifingered robot with 99% precision grasping. By studying a vast data set of 3D shapes and suitable grasps, the robot learned which grasp to use for different items. The study involved the researchers sending images to a large deep learning neural network connected to a 3D sensor and a standard robot arm. The robot's deep learning system then figured out what grasp the arm should use based on the object placed in front of it. The team of researchers plan to release the 3D data set they created to the public.

Why it's important:This project demonstrates how converging advances in control algorithms and machine learning approaches will enable a new generation of highly capable robots. At scale, dexterous robots will create their own economic implications as more robots replace humans in warehouse and other factory jobs where precision and consistency are key. | Share on Facebook

A Plant, 1,000 Times More Efficient at CO2 Removal Than Photosynthesis is Now Active

What it is: Climeworks, the world’s first commercial carbon capture plant, began sucking CO2 out of the air earlier this month in Zurich using a process that’s 1,000 times more efficient than photosynthesis. Climeworks is the size of three shipping containers full of spongy filters, which absorb CO2 from airflow directed by a fan. Once saturated, the container is closed, and the CO2 is released and heated. This final step transforms the CO2 into a form that can either be buried underground, sold commercially, or made into other products such as fertilizer.

Why it's important: To keep global temperature increases below 2 degrees C, we'll need multiple solutions beyond reducing emissions. Climeworks is a great example of how materials science and engineering can converge with new business models to tackle large global challenges. | Share on Facebook

When AI Improves Human Performance Instead of Taking Over What it is: At the Yale Institute of Network Science, researchers have shown that AI technology doesn’t have to be very sophisticated to make a difference in human lives. In a series of experiments involving collaboration and color coordination, bots increased group performance by an average of 55%. What's striking in this example is that the bots, placed throughout the grid, either generated purposeful mistakes or noise into the game, proving the point that even "dumb" AI’s can have a meaningful role to play in collective human performance.

Why it's important: With so much of the artificial intelligence solution news focusing on general Artificial Intelligence eliminating jobs and taking over, it’s important to remember that the end state -- and certainly the incorporation of AI’s into our lives -- will be much more collaborative. This study demonstrates the power of human-technology teamwork -- think autonomous vehicles mixed with human drivers, or first responders working alongside robots and drones. | Share on Facebook Why it's important: As we learn more about how cancers function, we’re seeing an explosion in the variety of treatments, from early detection to precisely targeted and tailored drug delivery to the vaccine-like method seen here. We're well on track to end cancer-related deaths and extend the healthy human lifespan. | Share on Facebook 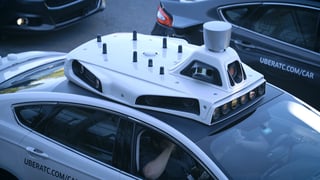 What it is: A study sponsored by Intel last week suggests that autonomous vehicles will create at least $7 trillion dollars of "passenger" economy by 2050, with value derived from time saved in commutes, the products and services sold to address that additional time, and mobility-as-a-service businesses that will generate about $3 trillion in revenue.

Why it's important: These impressive numbers highlight the massive positive impact that autonomous vehicles will have on the economy. The transformation we're seeing in the transportation sector presents a wealth of business opportunities -- despite the fact that much of the global press coverage focuses on the legal drama and technology races between disruptive startups and legacy automakers. | Share on Facebook

ARM's New Processors Are Designed to Power the Machine-Learning Machines What it is: ARM recently unveiled its newest generation of CPUs and GPUs -- the ARM Cortex-A75, the new flagship-tier mobile processor design, and the Mali-G72 graphics processor -- at the Compudex event in Taiwan. ARM says its processing components are the first to be designed specifically to tackle the challenges of onboarding Artificial Intelligence and machine learning.

Why it's important: ARM is responsible for designing the processor architecture of practically every mobile device. Qualcomm’s Snapdragon, Samsung’s Exynos and Apple’s A-series of mobile chips, are all built using ARM’s instruction sets and design blueprints. ARM's marketing chief, John Ronco, says he anticipates a "50x improvement in AI performance over the next three to five years thanks to better architecture, micro-architecture, and software optimizations." | Share on Facebook Why it's important: The implications of true quantum computing at scale are staggering. As Peter has written extensively, Microsoft, along with Google, IBM and Rigetti Computing, are in the race to prove quantum supremacy -- the test that validates that the computer you have is a quantum computer. Development of a quantum computer, if practical, would mark a leap forward in computing capability far greater than that from the abacus to a modern-day supercomputer, with performance gains in the billion-fold realm and beyond. When quantum computing pans out, we'll be able to control the very building blocks of the universe. | Share on Facebook

Lessons From Aluminum – Nothing Is Scarce!