What it is: Microsoft researchers are experimenting with multi-person augmented reality in a project called Comradre (pronounced like "camaraderie"). The project enables much richer, more personalized communication and collaboration than single-person virtual experiences. Imagine standing next to a colleague and independently manipulating multiple tracks of a song in three dimensions!

Why it's important: Integrating physical social interactions with virtual experiences is tricky -- for one thing, it depends on accurate movement tracking of all users in their own scenes -- but it's a critical step to commercializing and using VR/AR.

What it is: Online, Facebook and Google are competitors for our attention; offline, they're lobbying to alter international law so that they can use balloons and drones to enable universal Internet access.

Why it's important: Facebook and Google both face the same policy challenges in their respective initiatives to democratize Internet access. By joining forces, they create a powerful synergy -- and send a message of their commitment to opening up the Internet to everyone on the planet.

What it is: Trove is a platform that turns anyone into a fashion jewelry designer. It has 30 standard jewelry designs that users can customize as they please, right down to the metal choice. Trove's partner Shapeways then 3D prints the jewelry mold and the final product.

Why it's important: The Trove platform simplifies 3D design, and gives curious consumers an easy entry into 3D modeling. Another small yet significant benefit: by letting consumers try on the 3D printed plastic versions of their personalized jewelry, Trove also mitigates losses due to product returns.

The Lightest Metal Ever

What it is: Boeing has announced a revolutionary new material called microlattice that is the lightest metal ever made. It's incredibly strong, but because it's 99.99 percent air, it balances neatly on top of a dandelion.

What it is: NASA has invited tech startups to license patented NASA tech without upfront costs in an initiative called Startup NASA. The agency eliminated initial licensing fees and minimum fees for the first three years of use, but will collect a standard net royalty fee for any products sold after that period. An online patent portfolio organizes the 1,200-plus patents into 15 categories; to get started, entrepreneurs just need to fill out an application for a desired technology.

Why it's important: By dematerializing and demonetizing its patents to entrepreneurs -- who can shoulder significantly more risk than NASA can -- the agency is catalyzing innovation and dramatic breakthroughs.

What it is: Open Bionics, a member of the Disney Accelerator program, has unveiled brightly colored prosthetic hands branded in familiar Disney superheroes and movie characters. Kids can get 3D-printed prosthetics that look like Iron Man's arm, Elsa's gloved arm from Frozen and a light saber from Star Wars.

Why it's important: What kid wouldn't want to be a superhero or Disney character? Instead of trying to mask a child's limb differences, Open Bionics is celebrating them. With their 3D printed design, and capital investment and royalty-free licensing from Disney, these personalized bionic hands will remain affordable despite their familiar aesthetic. 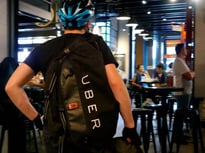 What it is: Uber Rush is a pilot experiment from 2014 that's just been promoted to a standalone business unit. It dematerializes couriers and delivery drivers like FedEx with its on-demand model: for $5 to $7 per delivery, any business can summon an Uber Rush to deliver an item. For example, a restaurant swamped with lunch delivery orders can use Uber Rush couriers to temporarily pitch in, or a boutique could use Uber Rush to offer same-day delivery.

Why it's important: Besides its clear benefits to small businesses, Uber Rush is an excellent example of how to run experiments to identify, test and iterate potential products and services -- and then use these experiment results to make data-driven business decisions.

What it is: LikeAGlove hopes to demystify online clothing shopping using smart fabric. Its sensor-equipped, conductive fiber-woven leggings discreetly measure a woman's figure and create an accurate digital representation of her figure. Shoppers can then instantly browse designer clothing in the exact sizes that will fit them.

Why it's important: Because of the giant disparity in women's sizes between designers, it's difficult to find a variety of right-sized clothing online. LikeAGlove's sensor-packed leggings make measurement accurate, private and, most importantly, easy.

How Artificial Intelligence is Finding Gender Bias at Work

What it is: A roundup of companies that are using language- and image-processing technology to identify bias in the workplace, including Kanjoya, Textio and HireVue.

Why it's important: Machine learning reveals that subtle word choices in job ads, employee surveys, and other hiring and retention tools may unintentionally communicate biases. Teaming up with technology identifies these "blind spots" in communication, enabling better decisionmaking throughout the employment cycle.

What it is: A team of researchers in Perth are using the most powerful research supercomputer in the southern hemisphere to fight world hunger by stopping the spread and domination of whiteflies in East Africa. In sub-Saharan Africa, whiteflies destroy almost 50 percent of cassava, an important regional food crop that 800 million people depend on for daily calories. Using grant money from Bill and Melinda Gates, a team is identifying the DNA of the species responsible for crop obliteration (34 whitefly species exist worldwide) so that they can engineer cassava crops resistant to that species and the viruses they carry.

Why it's important: Supercomputers make it possible to crunch a tremendous amount of data faster than ever before. As access to this computing power dematerializes, demonetizes and democratizes, researchers all over the world will be able to analyze data on demand and take on big problems like hunger.

What it is: ETH Zurich researchers have paired a camera-equipped drone with a walking robot to simplify navigation. The hexacopter drone flies ahead of the robot to map terrain, landmarks and elevation information. The robot parses this information and combines it with its global map to determine the best path around obstacles and unfamiliar terrain.

Why it's important: When unmanned aerial vehicles can do real-time reconnaissance and course correction for their robot partners, humans are freed to do higher-level work. This particular partnership helped the walking robot successfully navigate previously unknown terrain using map data entirely provided by the drone -- through narrow pathways, up a ramp and on scaffolding.

Rat Brain Reconstructed in a Computer

What it is: Scientists working on the Blue Brain Project have digitally recreated part of a young rat's brain: 31,000 brain cells of 207 different types with 37 million connections, to be exact. In testing, the computer simulation solved billions of equations for every 25 microseconds of neuronal activity.

Why it's important: This development digitizes a core step of medical research. In experiments, researchers discovered that the digital neurons behaved just like physical neurons do in the lab -- which could one day eliminate animal testing entirely.

What it is: Florida Atlantic University researchers have developed a realistic 3D-printed robotic finger using a thermal training technique on a shape memory alloy. The fingers can flex and extend in a remarkably lifelike fashion.

Why it's important: This robot has immediate applications in underwater robots, increasing humans' exploration capabilities, but could one day enable powered prosthetics with better-than-human powers.

What it is: For the first time, scientists have recorded the first direct measurement of resistance to bending in a nanoscale membrane. Working with gold nanomembrane 10,000 times thinner than a sheet of paper, researchers discovered that the nanomembrane was over 100 times more resistant to bending than their predictions.

Why it's important: This finding enables researchers to develop new nano-sized materials, objects and machines that are stronger, more flexible and customizable than previously imagined.

What it is: An interview with Jeff Immelt in which he describes GE's Industrial Internet initiatives. Predix, Brilliant Factory and Digital Power Plant are all mentioned for their abilities to cut down on unplanned downtime using networked sensors. Immelt also shares excellent nuggets of insight on how GE envisions using robots, virtual reality and drones in industry.

Why it's important: By focusing on products and services tailored to the needs of historically slower-moving legacy industries, GE positions itself as a guide to the future, and a trusted authority on tapping into the tremendous power of exponential technologies.

A New Way to Fight Aging in the Brain 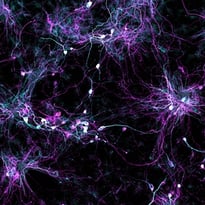 What it is: Scientists at the Salk Institute for Biological Studies have taken skin cells from donors of different ages and transformed them into brain cells that reflect their donors' ages. This is the first time researchers have been able to creating aging human brain cells from older people's skin cells rather than from old brains.

Why it's important: This age-specific brain cell testing holds the keys to understanding how human neurons age -- and how we can reverse the effects of aging and eradicate diseases like ALS and Alzheimer's. Expansions of this cell-transforming technique might enable us to produce even more realistic 3D models of human organs.

Gartner Identifies the Top 10 Strategic IT Technology Trends for 2016 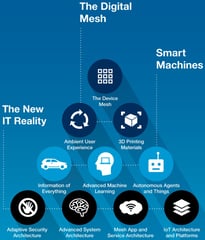 What it is: At the Garner Symposium/ITxpo, Gartner Inc. highlighted the top 10 technology trends for 2016 that will shape digital business opportunities through 2020. The trends mentioned were the device mesh, ambient user experience, 3D printing materials, Information of Everything, advanced machine learning, autonomous agents and things, adaptive security architecture, advanced system architecture, mesh app and service architecture, and Internet of Things platforms.

Why it's important: Gartner's 2016 trends reflect a key prediction Peter made at A360: increasingly powerful computers will dematerialize into our ambient environment, empowered by networked sensors, cloud computing and machine learning advances.

Back to the Future