What it is: Disney Research has developed an app that transforms your colored-in pages into 3D animations, using an iPad with a camera. The augmented reality project has a "virtual spring system" that guesses what an incomplete 2D drawing would look like in 3D.

Why it's important: Last week, we covered Disney's investment in Jaunt VR. With this augmented reality coloring book, it's clear that the House of Mouse is focusing intensely on how tech can enhance a variety of in-person experiences with its brand.

What it is: IBM recently announced a breakthrough in creating transistors out of carbon nanotubes, enabling the development of a highly efficient carbon nanotube chip within the decade. Such a technology would not only uphold Moore's Law, it would also supercharge high-performance computers and mobile devices, increasing power, battery life and performance all around.

Why it's important: As an alternative to silicon-based chips, IBM's carbon nanotube breakthrough makes cloud data centers to deliver their services more economically and efficiently, powers the Internet of Everything, and accelerates Big Data analysis.

Cheaper and Smarter: Blowing Up College With Nanodegrees

What it is: Massively open online course (MOOC) company Udacity has partnered with Google to provide what it calls "nanodegrees" -- smaller courses of study focused on a specific subject, like iOS coding. Unlike traditional four-year degrees, a nanodegree will take a just few months and about $1,000 to complete. In India, Udacity has partnered with Tata to recognize Udacity nanodegrees when hiring.

Why it's important: Nanodegrees are an alternative to higher education -- one that dematerializes the standard degree in favor of custom-created bundles of topical knowledge. As the nature of work and in-demand capabilities change, we'll need to constantly evolve our skills and upgrade our knowledge -- and nanodegrees offer an efficient, cost-effective way to do so.

What it is: Bioengineers at North Carolina State University and the University of North Carolina at Chapel Hill have developed a software algorithm that automatically tunes powered artificial limbs as the limb-wearer walks throughout the day. The algorithm enables prosthetic limbs to compensate for short-term changes in gait (carrying a suitcase through an airport, balancing a baby on a hip) in real time, and then revert to normal.

Why it's important: Intelligent prosthetics are more comfortable, lifelike and useful for the wearer. Exoskeletons equipped with this algorithm would similarly supercharge workers and help them adapt to challenging, ever-changing conditions. 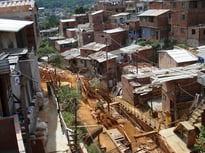 Why it's important: These findings support Peter's Abundance thesis that by 2030, we will be able to end poverty and ultimately provide the basic needs of every man, woman and child on the planet.

What it is: Elon Musk and SolarCity have introduced a new rooftop solar panel that achieves a peak efficiency of 22.04 percent -- making it the world's most efficient solar panel. The panels are the same size as traditional solar panels, but produce 30 to 40 percent more power, and with better performance in high temperatures. Next year, SolarCity expects to produce as many as 10,000 solar panels a day out of its 1 gigawatt factory in Buffalo.

Why it's important: Evidence that solar energy is continuing its exponential power performance growth as costs continue to plummet.

What it is: Disney Research has developed a 3D printed soft "skin" and touch system for toy robots that gives them a sort of airbag system protecting the robot's internal frame. Pressure feedback-equipped robots can instantly detect airbag pressure increases and adjust torque accordingly -- making such robots more damage-resistant and, of course, huggable for children.

Why it's important: This development enables soft yet durable educational toy robots -- a boon for fans of Disney films like Big Hero 6, Wall-E and Star Wars. This is also a developing case study on how big companies innovate: We're increasingly seeing the results of Disney's heavy investment into exponential technologies like robotics, 3D printing and virtual reality.

How Robots Can Learn New Tasks by Observing 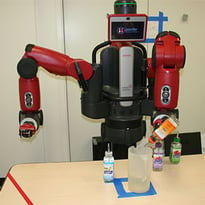 What it is: University of Maryland researchers have created a "robot training academy" that turns industrial robots into attentive students. "We ask an expert to show the robot a task, and let the robot figure out most parts of sequences of things it needs to do, and then fine-tune things to make it work," explained Yezhou Yang. The same researchers previously showed that a robot can learn how to perform tasks by watching thousands of YouTube videos.

Why it's important: Yang says that at many companies, it takes six or more weeks to reprogram a robot. Converging advancements in Artificial Intelligence and computing accelerate, simplify and scale industrial robot training; accordingly, it won't be long before we can train our own home robots using natural language.

What it is: In a recent interview with Danish media, Elon Musk made a bold prediction: by 2017, Tesla will have the right powertrain and battery technology to offer a model with an electric range of 1,000 km (over 600 miles), and that a range of 745 miles is possible by 2020. Another fun nugget: by the end of this year, an automated passing function could make it into Tesla vehicles.

What it is: Want a miniature, working brain to experiment with stem cells or test drugs? It'll cost you a quarter, thanks to Brown University researchers. They turned a small sample of living tissue from a single rodent into thousands of mini-brains, each one-third of a millimeter in diameter. While these mini-brains can't "think," per se, they do produce electrical signals and form synapses -- perfect for neuroscience research.

Why it's important: This relatively easy, affordable in vitro brain model could dramatically reduce animal use in testing. It also demonetizes and democratizes access to neural tissue, which in turn empowers smaller research labs.

What it is: Researchers at the University of New South Wales have revealed the first two-qubit logic gate in silicon, thus clearing the way for silicon quantum computers. The UNSW researchers reconfigured the transistors in silicon chips into qubits, using the same basic manufacturing technology used in today's computer industry. "We believe [this process] will [make it] much easier to manufacture a full-scale processor chip than for any of the leading designs, which rely on more exotic technologies," says Andrew Dzurak.

Why it's important: Quantum computers will dramatically accelerate artificial intelligence and Big Data analysis. For context on qubits, MIT professor Seth Lloyd said earlier this year that a machine of just 300 qubits could be used to map the entire universe -- every piece of information that's existed since the Big Bang.

What it is: Yutong, a leading Chinese bus manufacturer, recently sent a self-driving city bus on a 20-mile ride through Zhengzhou. The prototype bus passed other cars, changed lanes and responded to lights at a top speed of 42 miles per hour -- without incident.

Why it's important: This is the world's first successful trial of a self-driving bus -- and it didn't happen in North America. A promising glimpse into the future of autonomous mass transit.

NASA study: Flying Air Taxis Could Be as Cheap as an Uber Ride, and Faster

What it is: A new NASA study indicates that a flying air taxi could one day be as inexpensive as an Uber ride -- and get you to your destination three times faster. Mark Moore, chief technologist for on-demand mobility at NASA's Langley Research Center, presented a scenario for an area of Silicon Valley where air taxis could travel for about $1.50 per mile and achieve a ground-speed travel rate of 63 mph to 122 mph.

Why it's important: Moore specifically cites the Uber model as a door-to-door system for air taxis, saying, "It's hard to beat that economic model." Converging technologies (batteries, materials science), as well as a number of companies working on distributed electric propulsion aircraft, make this "crazy idea" feasible.

What it is: Queen Mary University of London researchers have developed self-assembling organic molecules that form a dynamic tissue, which they can guide to grow into complex shapes -- without 3D printing or molds. KurzweilAI reports that this finding allows scientists to "...study Alzheimer's with a high level of similarity to the real tissue and create better implants, complex tissues and more effective drug-screening methods."

Why it's important: This is a major development in synthetic tissue creation, with tremendous implications on medical research. Imagine being able to grow tissues from scratch that mimic synthetic arteries, veins or the blood-brain barrier -- either for study or treatment.