In the coming decade, we may soon begin connecting our brains to an Artificial Intelligence.

Elon Musk’s company Neuralink just announced groundbreaking progress on its “Brain-Computer Interface” (BCI) technology, striving towards a 2 gigabit-per-second wireless connection between a patient’s brain and the cloud in the next few years.

Initial human trials are expected by the end of 2020. Long-term, Elon expects BCI installation to be as painless and simple as LASIK surgery (a thirty-minute visit, no stitches or general anesthesia required).

Over a decade ago, my friend and mentor Ray Kurzweil predicted that our brains would seamlessly connect to the cloud by 2035. Even considering his 86% prediction accuracy rate, this prediction seemed somewhat ambitious. But Neuralink’s recent announcement adds significant credence to Ray’s prediction and timeline.

In the long-term, the implications of high-bandwidth BCI are extraordinary. Nothing is more important to a company, nation, or individual than intelligence. It is the fundamental key to problem-solving and wealth creation, and underpins the human capital that drives every company and nation forward.

In this blog, I’ll be exploring:

Beyond the pioneering technology itself, Neuralink has a compelling business plan.

The company’s brain implants, connected via Bluetooth to an external controller, are designed to first treat patients with cervical fractures and neurological disorders, allowing them to restore somewhat normal function. Long-term, they will be made available to the general population for enhanced capability, or to enable Artificial Intelligence enhancement of our brain.

In the near-term, Neuralink aims to restore function to those patients who have suffered brain and spinal injuries, helping reinstate their ability to feel and regain motor agency. Beyond such use cases, however, Neuralink ultimately strives to achieve a full “symbiosis with AI,” according to Elon. He makes the important distinction, however, that merging with AI will be an option — not a requirement — in the future.

BCI devices will serve as the brain’s tertiary “digital superintelligence layer,” a layer we arguably already experience in the form of phones, laptops, wearables, and the like.

Yet as explained by Elon, “the constraint is how well you interface — the input and the output speeds. You have a very slow output speed, with typing on keys. Your input speed is faster due to vision.”

Neuralink will eradicate these barriers to speed, providing instantaneous, seamless access to an abundance of knowledge, processing power, and even sensory experience.

One breakthrough enabling Neuralink’s technology is the development of flexible electrode “threads” with a diameter measuring one-tenth the width of a human hair (4 - 6 μm in width, or the approximate width of a neuron). These can be inserted into the uppermost levels of the human cortex and interface (read & write) with neurons.

1,024 of these threads attach to a single small Neuralink chip (“N1”) that is embedded into the skull, just below your scalp. Each of the N1 chips collects and transmits 200Mbps of neural data, and up to 10 such chips (implanted into a patient) allow for the grand total of a 2Gbps wireless connection. The wireless connection is then made via Bluetooth to an ear-mounted device that connects this brain data to the cloud. 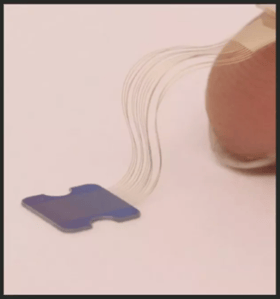 Enter an era wherein users can control their brain implants via an iPhone app. Or imagine the 2030 generation of iPhones (if iPhones are still around), revamped to include a separate App Store: Brain Edition.

Given the threads’ infinitesimal size, large number and flexibility, Neuralink had to developed a special purpose, high-precision robot to perform the thread insertion procedure.

Within the procedure, a mere 2mm incision in the scalp and skull is needed for each implant, small enough to be closed with crazy glue. Minimizing risk of brain trauma, the robot’s 24-micron needle is designed to precisely place threads and avoid damaging blood vessels. In initial quadriplegic patients, one array will reside in the somatosensory region of the brain and three in the motor cortex.

As summed up by lead Neuralink surgeon Dr. Matthew MacDougall, “We developed a robotic inserter that can rapidly and precisely insert hundreds of individual threads, representing thousands of distinct electrodes, into the cortex in under an hour.”

Progress in Neuralink's labs has been fast and furious. Over the past two years, the size-to-performance ratio of Neuralink’s electrodes has improved seven-fold.

Recalling Ray Kurzweil’s prediction of high-speed BCI by 2035 (only 15 years from now), how far can the technology go in this short timeframe?

Well, let's consider that if chip performance doubles every two years, we are about to witness a 128X improvement in the technology over the next 15 years.

For perspective, remember that the first-generation iPhone was only released in 2007 — just a dozen years ago — and look how far that technology has traveled!

Bolstered by converging exponential technologies, BCIs will undoubtedly experience massive transformation in the decade ahead.

But Neuralink is not alone….

While there are likely dozens of other top-secret BCI government ventures taking place in the U.S., China, and Russia, to name a few countries, here are some of the key players driving the industry in the U.S.:

(1) Kernel is currently working on a “noninvasive mind/body/machine interface (MBMI)” that will be able to receive signals from neurons in far greater numbers than the 100 neurons that current neuromodulators can stimulate.

Kernel’s CEO and my friend Bryan Johnson aims to initially use the neuroprosthetic to treat disorders such as Alzheimer’s, strokes, and concussions. Yet long-term, Johnson envisions the technology will also help humans keep up with the rapid advancement of computation.

(2) Facebook announced in 2017 its work on a noninvasive BCI that would integrate with the company’s augmented reality headset, providing a “brain click” function at the most basic level. According to Zuckerberg, the BCI can already distinguish if a user is thinking about an elephant or a giraffe, and it will ultimately be used for type-to-text communication.

“Our brains produce enough data to stream 4 HD movies every second. The problem is that the best way we have to get information out into the world—speech—can only transmit about the same amount of data as a 1980s modem. We’re working on a system that will let you type straight from your brain about 5X faster than you can type on your phone today,” as explained by Zuckerberg in a post.

(3) CTRL-Labs, a startup founded by the creator of Microsoft Internet Explorer Thomas Reardon and his partners, is now developing a BCI moderated through a wristband that detects voltage pulses from muscle contractions.

The group aims to eventually detect individual clusters of muscle cells so that users can link imperceptible movements to a variety of commands.

(4) One of the earliest BCI benefactors, DARPA has funded BCI research since the 1970s, aiming to use the technology in recovery and enhancement. Yet recent advancements remain under wraps.

(5) While most of the invasive BCI technologies mentioned here await human trials, BrainGate has already demonstrated success in humans. In one iteration of their technology, researchers implanted 1 - 2 electrodes in the brains of three paralyzed patients. The implants allowed all three to move a cursor on a screen by simply thinking about moving their hands. One participant even recorded eight words per minute.

This astounding feat, possible with just two electrodes, suggests tremendous promise for the thousands of electrodes that Elon plans to achieve in Neuralink’s devices. While FDA approval for human trials will likely take time (Neuralink has primarily tested their technology in mice and a few monkeys), use in human therapeutics is now finally on the horizon.

Financial analysts forecast a $27 billion market for neural devices within the next six years. Elon anticipates reaching human trials by the end of next year. And by 2035, the technology is set to achieve low-cost, widespread adoption.

Neuralink’s high-bandwidth brain connection will exponentially transform information accessibility. Thought-to-speech technology will allow us to control avatars — both digital and robotic — directly with our minds.

We will not only upload photos and conversations to the cloud, but entire memories, ideas, and abstract thought. Say goodbye to Google search and 2D screen-confined engines as we adapt to querying directly from our brains.

And for those of you worried about Terminator-like scenarios of AI’s destruction of the human race, BCI will offer us the potential to join tomorrow’s intelligence revolution, rather than be crushed by it.

Every human today is composed of ~40 trillion cells that all function together in a collaborative fashion, constituting you, me, and every person alive.

One of the most profound and long-term implications of BCI is its ability to interconnect all of our minds. To share our thoughts, memories, and actions across all of humanity.

Imagine just for a moment: a future society in which each of us are connected to the cloud through high-bandwidth BCI, allowing the unfiltered sharing of feelings, memories and thoughts.

Imagine a kinder and gentler version of the Borg (from Star Trek), allowing the linking of 8 billion minds via the cloud and reaching a state of transformative human intelligence.

For those concerned about the domination of Artificial Intelligence (i.e. the Terminator scenario), take some comfort in the notion that it isn’t AI versus humans alone. A new version of Human Augmented Intelligence (HI) is just around the corner.

Our evolution from screens to augmented reality glasses to brain-computer interfaces is already beginning. Prepare for the accelerating pace of groundbreaking HI.

(1) A360 Executive Mastermind: Want even more context about how converging exponential technologies will transform your business and industry? Consider joining Abundance 360, my highly selective community of 360 exponentially minded CEOs, who are on a 25-year journey with me — or as I call it, a “countdown to the Singularity." If you’d like to learn more and consider joining our 2020 membership, apply here.

(3) Conversation with Sam Harris: This past week, I sat down with neuroscientist, philosopher, and podcast host Sam Harris for a deep dive on meditation, leveraging mindfulness for entrepreneurship, and the far-reaching implications of BCI. Click here to listen to our conversation.

Podcast Episode 74: The Future of Construction