Want to do something new and disruptive?

Want to change the status quo?

Here’s some advice -- be careful before consulting “experts”…

“An expert is someone who can tell you exactly how something can’t be done.” (See Peter’s Laws #21) 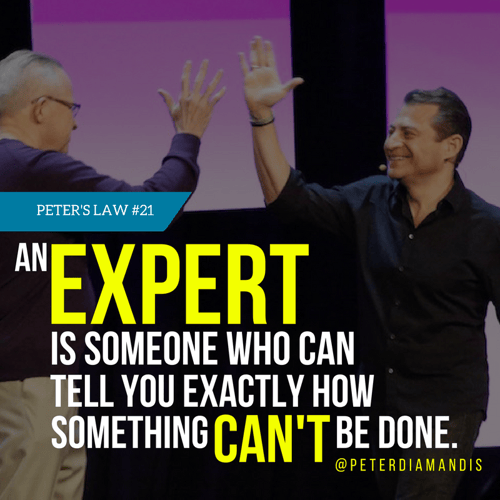 In a rather perverse twist, experts are generally disincentivized from promoting disruptive ideas.

If someone’s new theory creates a wholesale change in their field, then the expert goes from fame to a “has-been.”

Many ‘experts’ are therefore consciously or unconsciously incentivized to keeping their field exactly the way it's always been.

Here’s an example from the past…

In the early 1700’s, calculating the longitude was extremely difficult, but very valuable for the British fleets.

In attempt to solve the problem, the British government launched The Longitude Prize in 1714 – a £20,000 prize (millions in today's dollars) for the person who could build a device that could accurately calculate longitude.

The Longitude Board was composed of the world’s greatest astronomers, experts in their fields, because it was assumed that the solution would be astronomical in nature.

So when John Harrison, a watchmaker, proposed and built a unique timepiece (a clock), sufficiently accurate on a rocking ship to calculate longitude, the board of experts refused to award him the purse.

Harrison believed that accurate timekeeping (not better astronomical measuring equipment) was the key to the problem.

Eventually (a decade later), the Longitude Prize was awarded to Harrison.

Such a disconnect between the ‘status quo’ and the ‘disruptive innovator’ occurs over and over again.

When I announced the $10 million Ansari XPRIZE in 1996, many of the “experts” in the aerospace industry explained to me how naive I was... that $10 million would never be enough to motivate a winning solution, and that there was no way a small team could pull it off.

When Musk and Bezos proposed full reusability of their launch vehicle (the holy grail of rocketry, and something that the entire industrial-military complex had not been able to achieve), they were laughed at by many in the field.

I will close this blog with a quote from Henry Ford... I LOVE this quote. Enjoy.

"None of our men are 'experts.' We have most unfortunately found it necessary to get rid of a man as soon as he thinks himself an expert because no one ever considers himself expert if he really knows his job. A man who knows a job sees so much more to be done than he has done, that he is always pressing forward and never gives up an instant of thought to how good and how efficient he is. Thinking always ahead, thinking always of trying to do more, brings a state of mind in which nothing is impossible. The moment one gets into the 'expert' state of mind a great number of things become impossible."

Keep innovating and let’s create a world of Abundance.