Have you heard of “parabiosis”?

Connect the circulatory system of an old mouse with that of a young mouse and the old mouse gets younger!

The concept was popularized in the HBO series Silicon Valley, in which a tech billionaire uses a young “blood boy” as a source of young plasma transfusions for his longevity treatments.

Putting aside the moral issues, in the case of the mice, the rejuvenation results were shocking. A variety of the old mouse’s tissues, organs, and even its fur now had the characteristics of a far younger, healthier mouse.

Follow-up studies both confirmed this finding and showed that the opposite was true. Transfuse younger animals with blood from older ones and the clock spins forward, accelerating decrepitude, amplifying aging.

Now, in a new twist called “Total Plasma Exchange” or TPE, it might be possible to get these benefits in humans without needing your very own blood boy.

Recent clinical human trials using TPE have already reported positive results for the treatment of various age-related diseases such as Alzheimer’s—slowing disease progression by over 65%.

In this blog, we’ll discuss what parabiosis is and the latest research on the Total Plasma Exchange alternative: a bold idea that might serve as a possible cure for some of the aliments related to aging.

(This blog is written by Peter Diamandis, MD and Armando Cuesta, MD)

HOW INFLAMMATION RELATES TO AGING

As humans age, various processes cause overexpression of pro-inflammatory molecules that shift the body away from operating in a typical regulated state (homeostasis) and push it towards an always-on alert mode where every defensive asset is in overdrive.

This leads to a hyper pro-inflammatory immune system, which wreaks havoc and causes malfunctions over time, making the body more prone to develop conditions such as strokes, heart attacks, and neurodegeneration.

In essence, these are some of the core processes that cause the aging pistons to fire and what are likely some of the leading underlying drivers of the age-related incidence of diseases such as cancer and Alzheimer’s, among many other conditions.

This is where parabiosis or TPE comes in.

The concept is simple: If we can flush out pro-inflammatory aging compounds, then we can in theory delay or prevent the aging process, right?

This is the question that scientists Irina and Michael Conboy sought to answer.

HOW EXACTLY DOES PARABIOSIS WORK?

In a seminal paper published by the Conboys in 2005, two genetically identical mice were used to test this concept. In their research, the two mice (one old and one young) had their circulatory systems connected in a way that both lived off the same general blood pool: a combination of both young and old blood. 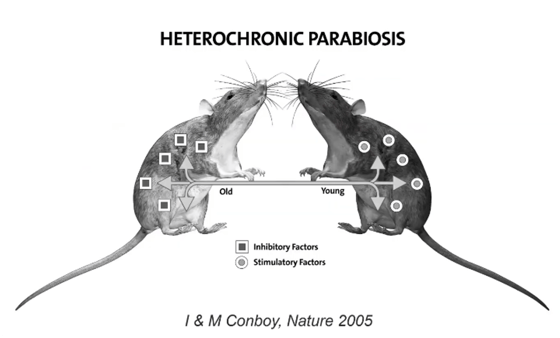 Their experiment suggested that the exposure of the older progenitor to the blood of the younger offspring restored portions of the older mouse’s body function.

From a cellular perspective, the older mouse became younger!

PARABIOSIS AS THE BASIS FOR PLASMA EXCHANGE THERAPY

Shortly after the Conboys’ work, additional research showed that young plasma (the liquid part of the blood fluid that contains proteins) alone was sufficient to provide rejuvenating effects.

Fortunately for us, we can cut the vampiric blood swap from the equation.

Since the advent of this work, researchers have been exploring the use of Therapeutic Plasma Exchange (TPE), or plasmapheresis, to replicate the results shown by the Conboys while mitigating the effects of aging in humans.

The procedure involves passing a person’s blood through an apheresis machine that separates their plasma, discards it, and reinfuses them with a combination of their old blood cells along with a replacement solution (albumin, dextrose, saline). 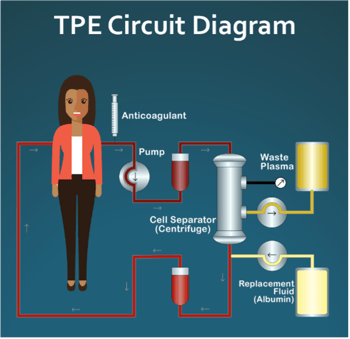 In essence, the old plasma, chock-full of aging or inflammatory factors, is removed from the patient and a new ‘inflammation-free solution’ is used to replace the blood volume.

Even though using fresh plasma from a young donor may sound like the ideal choice, there are several logistical and medical issues involved such as occasional anaphylactic reactions. Plus, the process of storing and transporting frozen plasma is cumbersome and costly. With these issues in mind, using fresh frozen plasma would essentially limit this procedure to hospital settings only.

Luckily, there may be another option…

Recently, there have been encouraging regenerative results for people undergoing TPE replacements with a different plasma exchange cocktail.

Replacing old plasma with saline and albumin (a blood serum protein) has been shown to slow the aging process while mitigating the issues with donor plasma. Yet it is uncertain if the key for regeneration lies in albumin administration or just the dilution of “old” pro-inflammatory factors contained in the person's blood.

However, several clinical trials are working to quantify the precise regenerative effects of saline-albumin transfers.

One remarkable study, AMBAR (Alzheimer’s Management by Albumin Replacement), is a randomized clinical trial that has recruited more than 490 Alzheimer’s patients aiming to delay their cognitive decline using TPE. 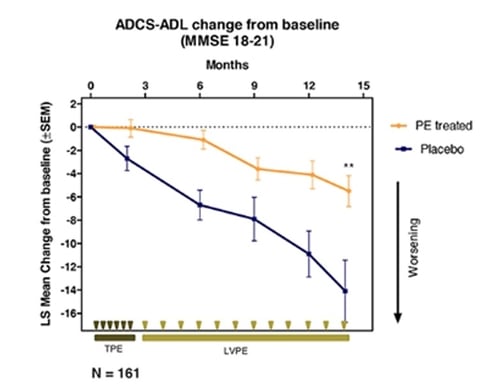 The ADCS-ADL (Alzheimer’s Disease Cooperative Study – Activities of Daily Living) is a standardized testing procedure used to measure the progression of Alzheimer’s. The test is composed of 23 items (such as dressing, washing dishes, reading, cooking, etc.) that test a patient’s functional and cognitive abilities.

By comparing a patient’s score at the beginning and end of the trial, a general level of disease progression can be obtained. As shown in the figure above, patients in the placebo group performed considerably worse in follow-up testing than their TPE-treated peers.

That said, the exact mechanisms behind the trial’s results are slightly more opaque. The AMBAR study investigated the effects of plasmapheresis with a solution of both albumin and immunoglobulin (IVIG). The addition of the IVIG raises several questions regarding which compounds are necessary, what regimen is the most effective, and how long the disease progression is slowed down.

While the jury is still out on the precise repair mechanisms behind TPE, one prospect is clear: TPE’s combination of a quick offset, efficacious safety profile, and profound regenerative effects could position it to be one of the major rejuvenating modalities of our future.

This is just a taste of the tremendous momentum that longevity science has right now.

We are edging closer toward a dramatically extended health span—where “100 years old can become the new 60”.

What will you create, where will you explore, and how will you spend your time if you are able to add an additional 40 healthy years to your life?

Each trip will be a 5-Star (luxury) deep dive to meet 20+ companies, 12+ academic labs / research institutes, and 28+ scientists / physicians and entrepreneurs who are leading the charge against age-related diseases and extending the human healthspan.

My mission is to give you first-hand exposure to the major players, scientists, companies and treatments in the longevity and vitality arena. All your questions answered. Early access to cutting-edge treatments and products. And a behind-the scenes view of tomorrow’s longevity revolution.

Both trips are nearly sold out. To learn more and lock in your seat, check out our website and sign up here!