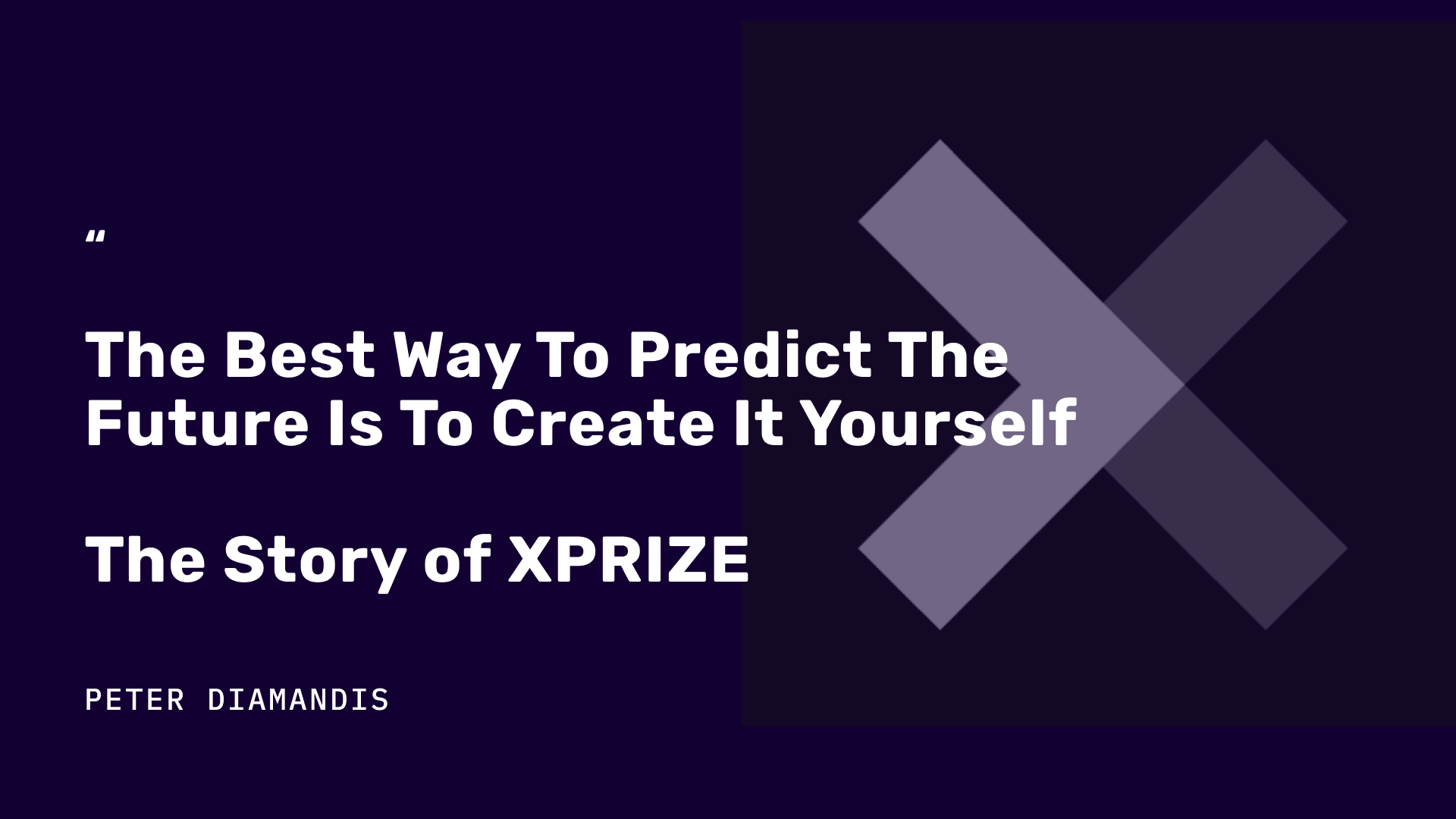 The best way to predict the future is to create it yourself!

I founded the XPRIZE Foundation back in 1994, 27 years ago(!!) based on that premise, as an innovation engine whose mission is to “inspire and guide entrepreneurs to solve grand challenges.”

XPRIZE empowers entrepreneurs and innovators and paints a clear and detailed vision of an abundant future across domains. It gives the world hope.

In today’s blog, I want to talk about XPRIZE: what it is, how it started, how it works, and what we’re doing to create a hopeful, compelling, and abundant future for all of humanity.

I first had the idea of XPRIZE after reading Charles Lindbergh’s book The Spirit of St. Louis given to me by my dear friend Gregg Maryniak in 1994. The XPRIZE Foundation was started a few months later with the vision of creating an incentive prize to encourage would-be spaceship designers to build rockets for the rest of us.

And in May of 1996, even though I didn’t have any prize money, we announced the $10M XPRIZE for Spaceflight under the Gateway Arch in St. Louis.

I thought for sure that someone would fund the $10M purse. After all, you wouldn’t have to pay the prize money until after a team successfully flew a passenger-carrying rocket to 100 km altitude, twice in two weeks.

But it wasn’t easy by any means.

Between 1996 and 2002 I must have pitched over 150 philanthropists and sponsors and was told NO—over and over and over again. Everyone thought the prize was too difficult and they were concerned that people would lose their lives.

Finally, I met the Ansari family who funded the purse (we ultimately named it the $10M Ansari XPRIZE in their honor), and a few years later on October 4, 2004 the first XPRIZE was won.

And today, as the XPRIZE Foundation is hitting its stride 27 years after it was founded, we have launched over $250M worth of XPRIZEs.

Following are our 5 core beliefs:

(1) We believe in the power of competition. It’s part of humanity’s DNA to compete. We do our best competing in sports, in business… why shouldn’t we also tap into that indomitable spirit of competition to bring about breakthroughs and solutions to solve the world’s biggest challenges?

(2) We believe that you get what you incentivize, and there are many innovative ways to solve a problem. Rather than tell entrepreneurs HOW to solve a problem, instead define a finishing line, and allow hundreds of innovators to try thousands of ideas.

(3) We believe that challenges must be audacious, but achievable, tied to objective, measurable goals. And understandable by all.

(4) We believe that solutions can come from anyone, anywhere and that some of the greatest minds of our time remain untapped, ready to be engaged by a world that is in desperate need of help. Solutions. Change. And radical breakthroughs for the benefit of humanity.

(5) The day before something is a breakthrough, it’s a crazy idea. It’s important to realize that truly “breakthrough ideas” are not small incremental improvements. They emerge as innovators reinvent fields and disrupt the existing doctrines.

HOW DO XPRIZE COMPETITIONS WORK?

There is no shortage of important areas in the world that require breakthroughs.

The mission of the XPRIZE Foundation is to accelerate those breakthroughs and help them scale into impact.

(1) Identify Prize Target Areas: XPRIZE works with innovators, scientists, and philanthropists around the world to get consensus on areas that are stuck—where innovation is possible but not moving forward. In choosing our next XPRIZEs, we are clear that not all problems are “prizeable” and not all prizes are XPRIZEs. Our goal is to find those challenges that can best be conquered with an XPRIZE incentive competition.

(2) Develop a Set of Clear and Objective Prize Rules: Once a target area is identified (e.g., Commercial Spaceflight, Gigaton Carbon Removal), XPRIZE then develops a set of clear, measurable, and actionable guidelines that offer teams a target to shoot for.

(3) Raise the Funding for the Purse to Credential the Prize: Next, our Foundation raises a significant prize purse and the budget to operate the prize over 2 to 10 years. The size of the purse is typically proportional the size of the challenge. That is, how “crazy” the idea is. Most recently Elon Musk funded our largest competition to date: the $100M XPRIZE Carbon Removal.

(4) Provide a Level Playing Field and Clear and Fair Judging: One of the most important ways we can help make breakthroughs easier is by offering teams, both big and small, a level playing field to demonstrate their solutions and technology, as well as knowledgeable and fair judges to help compare and evaluate teams.

(5) Identify and Anoint a Winner: Ultimately, XPRIZE crowns a winner, giving the winner publicity, capital (the purse), and credibility to help them scale globally.

(6) Promote the Winner and Winning Technology to Drive Impact: Finally, the XPRIZE Foundation has a responsibility to help take the winning team and technology from a news story to a scalable impact.

We want to create a future we can be proud of.

As I think about what kind of XPRIZE competitions we’ll create in the next 10 to 20 years, I believe that we’ll continue to see prizes that help create increasing abundance in the world in areas such as food, water, shelter, communications, knowledge, education, healthcare, and human rights. Our mission is to uplift and bring more possibility to every person on the planet.

Years ago, I pondered the question, “If I had an extra billion dollars, how would I use it to make the world a better place?”

My answer is that I would launch a set of 10 $100M XPRIZEs to get the world’s cognitive surplus working on the grand challenges we face. Here are 10 areas that those $100M XPRIZEs would focus on:

(1) Gigaton CO2 Removal (Already launched and in process. Thanks, Elon!)

(2) An Age Reversal XPRIZE to help us extend the human healthspan (This prize is in process, 50% funded towards a $100M purse.)

(3) An Asteroid Detection and Deflection Prize

(4) A Wildfire Detection and Extinction Prize

Be the CEO of Your Own Health