How would your life improve if you never again had to drive to work, to the store, or to your friend’s home? How much time would you save if you weren’t the one behind the wheel? And what would you do with those extra hours?

Cost of ground transportation is slated to decrease between 2x to 4x as a result. Sometime in the near future, your kids or elderly parents will never drive.

A significant percentage of parking garages, driveways, and parking structures will eventually be transformed into alternative usable space. Autonomous cars will take all shapes and sizes and serve as functional “3rd spaces” used for entertainment, sleeping, or meeting rooms as drive time becomes work or play time.

At the same time, aerial ridesharing, eVTOL (electric Vertical Take-off or Landing) or flying cars will also become fully operational in most major metropolitan cities this next decade.

Where you live and work will begin to transform as these systems shrink travel time and distance. Previously difficult to reach geographies (islands, rural areas, mountain tops) will become accessible. Individuals seeking the solitude of the country will also have access to the shopping, food, and entertainment of metropolitan city centers, connected through eVTOL technology.

This Metatrend will be driven by the convergence of machine learning, sensors, materials science, battery storage improvements, and ubiquitous gigabit connections.

In today’s blog, we’ll look at some of the leading companies shaping the future of the autonomous vehicle and eVTOL markets.

The era of the internal combustion engine (ICE) car may finally be coming to an end.

From here on out, it’s all about electric vehicles and autonomous ridesharing, and the implications for society and the automotive industry are massive.

As electric vehicles improve in performance and witness a drop in overall operating costs, forward-thinking individuals, companies, and investors are rapidly transitioning to all-electric transport.

Plummeting prices and increased convenience will soon tip the favor towards electric car-as-a-service options, and private ownership of internal combustion engine cars will become a thing of the past.

So, how do we get to this future?

Let’s look at a few of the leading companies paving the path forward. 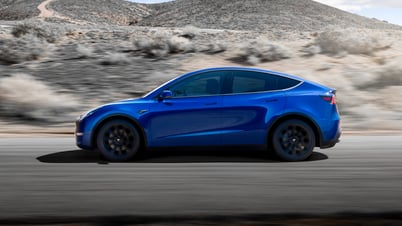 Tesla has offered a driver-assistance system called Autopilot for a while—it can accelerate, brake, and steer Tesla cars on highways.

The company’s FSD technology promises to take this to the next level, allowing Teslas to do all of those things autonomously on highways and on city streets.

FSD is relatively early in its development, but there are already about 100,000 beta testers currently using the technology.

So, what exactly can FSD do?

Reporters from The New York Times recently spent the day with one of those FSD beta testers in Jacksonville, Florida. This particular FSD beta tester, a middle-aged pilot, has been using FSD for more than 2 years.

As the journalists noted, “Over six hours, his car navigated highways, exit ramps, city streets, roundabouts, bridges and parking lots. With his hands near or on the wheel and his eyes on the road, the car attempted more than 40 unprotected left-hand turns against oncoming traffic.” Meanwhile, a GoPro mounted on the roof and 8 cameras on the front, back, and sides of the car record everything that the car and riders experience.

Ultimately, the goal of FSD is for it to be fully autonomous, including adapting to and navigating the unexpected—while being 10x safer than human drivers.

Both that goal and the technology that support it are different from what companies like Alphabet and GM are aiming to achieve with their “robotaxi,” or car-as-a-service, offerings.

The robotaxi companies tightly control how and where their cars can drive. They use laser sensors called lidar to build 3D maps of individual neighborhoods to give the cars a specific understanding of the terrain, and then the companies will spend months or years testing the cars in these well-designed environments.

This means that the robotaxi cars have strict limitations on how they drive—only in certain neighborhoods, under certain weather conditions, and at relatively low speeds. And technicians from the companies can provide remote assistance as needed.

As the New York Times report noted, lidar is too expensive for most consumer cars, and building 3D maps and testing the vehicles on every American street is impractical, if not impossible.

This is why Tesla’s process of collecting data and feedback from its FSD beta testers, and then constantly iterating on new versions, is critical.

So, when can we expect the full roll-out of FSD?

Tesla is currently in the process of widening the release of FSD Beta V11. This version is notable because it’s the first version of the system that operates using a single software stack.

In terms of timing, Elon recently said that FSD Beta is “now available to anyone in North America who requests it from the car screen.”

There are multiple companies creating autonomous car-as-a-service vehicles, or robotaxis, around the world, principally in the United States and China. Two of the leading ones in the US are Alphabet’s Waymo and GM’s Cruise.

Waymo first offered fully autonomous public rides to “Trusted Testers” in Phoenix, Arizona in 2020, and is now expanding the service to the general public in the city.

In November 2022, the company won approval from the California Public Utilities Commission to carry passengers in its autonomous robotaxis without a safety driver present under a new pilot program. The program allows Waymo to offer its driverless passenger service throughout San Francisco, Mountain View, Palo Alto, and other parts of the state.

The vehicles are allowed to operate on public roads with posted speed limits of 65 miles per hour throughout the day or night.

Waymo also recently partnered with the Chinese automaker Geely to design a “purpose-built, passenger-first autonomous vehicle.” The new prototype has no steering wheel, pedals or mirrors, will seat up to 5 people, and according to Waymo, will be “30 percent more efficient than anything else on the street.” 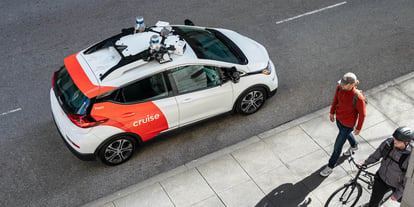 Cruise first opened its fully driverless ride-hailing service, in which there’s no human safety operator, in early 2022 in San Francisco.

The company, which uses modified Chevy Bolts known as Cruise AVs, was initially only offering the service at night, between the hours of 11pm and 5am. The rationale for the night-time operation was to reduce the safety risk to other cars and people on the road. In November 2022, Cruise extended the ride-hailing service in San Francisco to daytime hours as well.

Cruise has also expanded to two other cities in 2022, Austin and Phoenix, and operates around 300 autonomous robotaxi vehicles across the 3 cities.

And Waymo and Cruise are not alone! Other key players to watch include Amazon’s robotaxi arm Zoox, Baidu, Pony.ai, as well as autonomous offerings from major car makers like Ford.

FLYING CARS ARE FINALLY ON THEIR WAY

The global urban air utility market, which includes eVTOL aircraft, has the potential to reach nearly $30 billion by 2030.

Increased investment in and development of eVTOLs is driven not only by improved battery, motor, and power electronics technologies, but also by an increasingly favorable regulatory environment.

For example, in November 2022 the US Federal Aviation Administration (FAA) proposed new rules that help pave the way for commercial air taxi operations by 2025. Specifically, the proposal updates the FAA’s air carrier definition to add “powered-lift” operations to regulations that cover other commercial operations such as airlines.

Acting FAA Administrator Billy Nolen has said that by the 2028 Los Angeles Olympics, air taxis will be in high demand.

Let’s look at a few of the leading companies that will finally deliver on the dream of flying cars.

Many consider Joby in the lead to achieve certification by the US FAA.

In November 2022, US aviation regulators revealed “airworthiness criteria” for Joby’s JAS4-1, a passenger craft that’s designed to lift off like a helicopter and then fly horizontally like a plane.

The JAS4-1 can carry 4 pilots and 4 passengers, has a maximum takeoff weight of 4,800 pounds, and uses 6 tilting electric engines with 5-blade propellers.

The company has received significant interest and investment from multiple companies, including Toyota and Uber, as well as the US Department of Defense. Joby went public in February 2021 for $6.6 billion. In October 2022, Delta announced a $60 million equity investment in Joby, as part of a “multi-year, multi-market commercial and operational partnership.” Assuming certification is granted, Joby would partner with Delta to provide a home-to-shuttle service for Delta customers in select markets.

So, when can we expect to see Joby’s eVTOL flying overhead?

CEO JoeBen Bevirt expects to launch its commercial service in 2025. 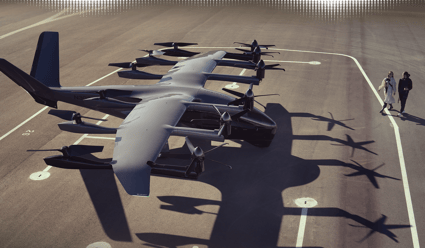 Archer recently unveiled its production eVTOL called Midnight, which is an evolution of the company’s prototype model known as Maker.

The company says that a high level of redundancy in Midnight’s design as well as its simple propulsion system will ultimately make it safer than helicopters.

Midnight can carry 4 passengers plus the pilot, and has a planned cruising altitude of 2,000 feet. Its 12 small propellers help make it relatively quiet, registering about 45 decibels when measured from the ground.

Archer has ambitious plans for production once Midnight is certified by the U.S. FAA, which is expected in 2024.

CEO Adam Goldstein recently laid out the plan in an interview with Reuters: 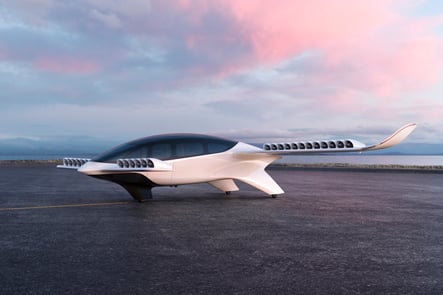 Lilium’s eVTOL, which has a maximum takeoff weight of around 7,000 pounds, can carry up to 6 passengers, and has a range of roughly 108 nautical miles.

Lilium has secured partnerships with multiple companies, including Saudia, the national airline of Saudi Arabia. As part of that agreement, Lilium will supply 100 Jets to build an eVTOL network across Saudi Arabia. Lilium also secured a $1 billion deal with the Brazilian airline Azul to supply up to 220 Jets.

Lilium has planned launch networks in Germany, the US, and Brazil and hopes to achieve certification from the European Union Aviation Safety Agency ahead of its commercial launch in 2025.

By the end of this decade, a transportation revolution will impact some of the most intimate aspects of our lives.

Where you choose to live and work, how much free time you have—and how you spend that time. Everything from how our cities look and feel to the demographics of the “local” school district will shift.

How are you going to adapt?

In our next Metatrend blog (#7 of 20), we’ll investigate the notion that On-Demand Delivery (& Production) Will Birth an “Instant Economy of Things.”

ALSO, these 20 Metatrend topics are the focus of my annual Abundance360 Summit where I bring together top entrepreneurs, investors and CEOs to discuss how these Metatrends are re-inventing every industry.