How soon will your online orders be delivered directly to your home by drone? Or get 3D printed in your closet?

Urban dwellers will learn to expect “instant fulfillment” of their retail orders as drone and robot last-mile delivery services carry products from local supply depots to your doorstep. This capability, coupled with the deployment of regional on-demand digital manufacturing (3D printing farms), means that even customized “stuff” can be obtained within hours anywhere, anytime.

Just as FedEx and Amazon pioneered the concept of next-day and same-day delivery,

and Domino’s invented the idea of a pizza in 30 minutes or less, this Metatrend will yield

anything and almost everything faster and cheaper—birthing an “on-demand economy.”

This Metatrend is driven by the convergence of networks, drones, robotics, 3D printing, and artificial intelligence.

Instant deliveries of online orders to your home via drone may sound like science fiction to many, but it’s already here.

Global consulting firm McKinsey estimates that between 2018 – 2021, there have been over 660,000 commercial drone deliveries to customers—and projects that there will be nearly 1.5 million deliveries via drone in 2022 alone.

Several reports suggest that the commercial drone market could soar from roughly $8 billion in 2022 to over $47 billion by 2029.

With all this activity, what exactly is getting delivered via drone?

November 2016 marked an important moment in the commercial drone delivery market. It’s when drone delivery pizza became a reality. Domino’s teamed up with its drone delivery partner Flirtey to drop off a pizza order at a customer’s door in Whangaparaoa, New Zealand, 25km north of Auckland.

Since then, over 100 companies offering drone delivery services have delivered everything from medical supplies and vaccines to electronics and toothpaste to customers’ homes.

Let’s look at 3 of the leading companies in the commercial drone market: 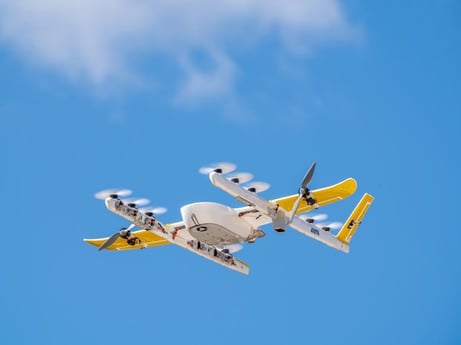 Wing’s drone, called the Hummingbird, is just over 4 feet long, has a wingspan of 5 feet, and weighs just 12 pounds. It can travel at up to 65 mph and can carry a package that weighs about 2.5 pounds.

The main market for Wing’s commercial deliveries has been Australia. Customers in the country have received items delivered by drone in as little as 15 minutes.

Wing has since expanded its delivery service for many customers including Walgreens and Blue Bell Creameries. The company has also made deliveries in the US and recently kicked off demo flights in both Finland and Ireland. 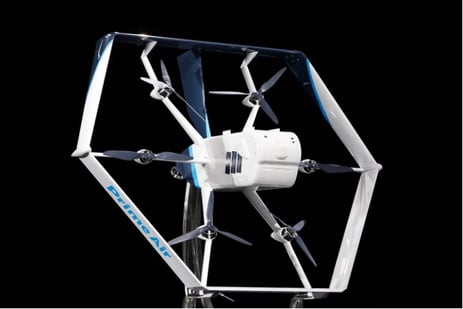 Amazon revolutionized the retail industry with its Amazon Prime Two-Day delivery service nearly two decades, and the company is again pushing the boundaries of the shopping experience with its Prime Air drone service.

Amazon is building fully electric drones that deliver packages under 5 pounds to customers in less than 60 minutes.

So, when can we expect to start receiving our Amazon orders via drone?

Earlier this year, the company announced that it will begin making deliveries to customers’ homes in limited areas of California and Texas using its drone called MK27-2.

The drone is about 5.5 feet in diameter and weighs 80 pounds. It can carry packages up to 5 pounds that can fit in a container about the size of a shoebox. Once the package is loaded into the MK27-2, the drone takes off vertically, similar to a helicopter, using 6 propellers, and can fly at about 50 mph before dropping off its package from 12 feet above the ground.

In November 2022, Amazon announced a new model drone, called the MK30, that will debut in 2024. The MK30 will be smaller, lighter, have increased range with the ability to fly in light rain, and will even be 25% quieter than the current MK27-2 model. 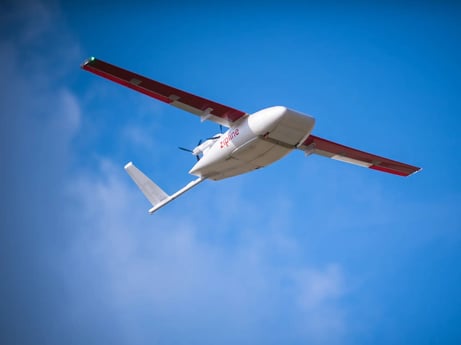 The company’s drones, which serve thousands of hospitals and health facilities, have completed over 425,000 missions across the continent, carrying more than 4.5 million products—including millions of vaccines.

Each Zipline drone has a fixed-wing design, weighs 45 pounds, can carry up to 7 pounds. They have a range of up to 100 miles while flying up to 400 feet overhead.

Based on its success across Africa, Zipline has since introduced multiple medicine and medical product delivery routes in Japan and the US.

For example, the company recently announced a partnership with Intermountain Healthcare, a healthcare company that serves the region around Salt Lake City, Utah. As part of the arrangement, Zipline will initially deploy 5 drones to serve on-demand deliveries of prescriptions and other medicines to patients in the region “in under 15 minutes.” The company plans to expand the service over the next 5 years so that it can reach up to 1 million patients across Utah.

THE ROLE OF 3D PRINTING IN THE “ON-DEMAND ECONOMY”

For decades, 3D printing (also known as additive manufacturing) has held the promise of on-demand creation. In the same way that printing went from large commercial print centers to local Kinko’s copy shops in the 1990’s, and eventually to low-cost consumer printers in the home, the question is: Will 3D printing follow the same route? Or will there be regional 3D printing factories, that then depend on drone delivery for the last mile?

Today, the 3D printing industry is worth about $14 billion and is growing fast at roughly 22% per year.

What’s behind all this growth?

This is the current state of the 3D market, but where is it headed? And how it will help to shape a future “instant economy of things”?

Here’s a quick overview of where additive manufacturing is going, and how it will promote an “on-demand economy.”

Beyond rapid prototyping, 3D printing also benefits all the other steps of the product development process, especially for low- to mid-volume production where high fixed costs and high tooling costs can deter market entry.

For example, if a company wants to print 100 parts for regional market testing, 3D printing allows the team to iterate on design features at no cost. Even increasing that number by 4X can be done without any additional retooling costs.

(2) Continued Reductions in Inventory & Storage Costs. On-demand production enables manufacturers to create 3D printed parts as needed instead of pulling the parts from a supply warehouse. This can significantly reduce inventory and storage costs.

For example, the shipbuilding industry has already seen reduced costs and increased returns from shifting to 3D printing. For instance, consider a metal part that averaged a 12-week turnaround and an average cost of $20,000 using traditional manufacturing methods. When that same part is produced using 3D printing, the production time drops to 72 hours and the cost plummets to just $1,250.

(3) 3D Printing Will Help Create a More Sustainable Future. Two key qualities of 3D printing are waste reduction and conservation. For example, with 3D printing scrap material is reduced—if not eliminated. That’s because 3D printing mimics biological processes by creating objects layer by layer, instead of traditional manufacturing methods that involve taking a large item and whittling it down and carving out chunks of material to reach the desired shape.

(4) 3D Printing Will Improve & Transform Global Supply Chains. Perhaps the most significant way that 3D printing will help to usher in an Instant Economy of Things is through reshaping global supply chains.

The Covid-19 pandemic has no doubt put increased strain in global supply chains. According to the Supply Chain Resilience Report, 75% of US companies “have experienced external disruptions to their manufacturing supply chain in the past year.” For example, companies might have inventory worth $500,000 or more that they can’t ship because they’re missing a single component.

Thankfully, 3D printing can help in the following ways:

As an entrepreneur, leader, or creative how will an on-demand economy change your business or business model?

How can you use these technologies to digitize, dematerialize, demonetize, and democratize your products or services?

In our next blog in this Metatrend series (#8 of 20), we’ll move on to the category “Global Connectivity & Ubiquitous Sensors.”

In Metatrend #8, we’ll explore the idea that Global Gigabit Connectivity Will Connect Everyone, Everywhere, Always at Ultra-low Cost.

ALSO, these 20-Metatrend topics are the focus of my annual Abundance360 Summit where I bring together top entrepreneurs, investors and CEOs to discuss how these Metatrends are re-inventing every industry.