We are witnessing the next great space race… but this time, it is not the U.S. vs. USSR. This race is between Elon Musk and Jeff Bezos.

The aerospace industry has always been driven by competition.

In 1927, Charles Lindberg competed against eight other teams to achieve the first non-stop transatlantic flight to win the $25,000 Orteig Prize.

In the 1960s, it was America versus the Soviet Union that resulted in Sputnik, Yuri Gagarin and Apollo 11.

Fast forward another 40 years, and in 2004 the $10 million Ansari XPRIZE sparked the commercial space industry.

Now in 2019, on the brink of the 50th anniversary of Apollo 11, the competition that will rocket humanity into the cosmos is between two passionate and brilliant multi-billionaires: Jeff Bezos and Elon Musk.

This blog outlines each of their capabilities, as well as their near-term and long-term vision for the final frontier.

“Do we want stasis and rationing, or do we want dynamism and growth?” — Jeff Bezos.

Jeff Bezos and I first met through a college student organization I founded while I was at MIT. The group (which still exists today) is called Students for the Exploration and Development of Space (SEDS). At the time, I was chair of the organization, and Bezos was president of the Princeton chapter.

While Jeff was a passionate space enthusiast, rather than pursuing aerospace out of college, he first followed his intellect to Wall Street, after which he proceeded to found Amazon, which would ultimately reward him with a personal net worth in excess of $150 billion.

Today, Jeff has remained true to his passion for space by committing $1B per year to underwrite his space company, which he named Blue Origin (or “Blue”) as a tribute to Earth.

Bezos founded Blue in 2000 with the vision to create “a future where millions of people are living and working in space.”

Of course, the first step for any serious space company is to build the rockets capable of shooting people and payloads off the Earth into space. In this category, Jeff has a planned sequence of bigger and bigger rockets.

Next up is Blue’s New Glenn rocket (named after pioneering astronaut John Glenn), which will be able to lift substantial payloads and people to the Moon.

Like SpaceX’s Falcon 9 (see below), New Glenn is designed for reusability by vertical propulsive landing of its booster stage. Blue hopes to first fly the New Glenn rocket in 2021.

In May 2019, in a presentation at the Air and Space Museum, Bezos unveiled Blue’s near-term mission to colonize the Moon for exploration, science, and resource utilization.

(NOTE: To my readers, I always capitalize the word “Moon” when it refers to Earth’s Moon, versus a generic moon… there are over 100 moons in our solar system. I think our Moon deserves at least the respect of capitalization!)

Bezos views the Moon as an incredible gift to our spacefaring species, one which will help humankind and space entrepreneurs break open the space economy.

With an abundance of frozen water, the Moon can provide fuel (oxygen and hydrogen) and critical elements for life (breathable oxygen and drinkable water).

As Bezos laid out in his May 9th 2019 address, utilizing resources from the Moon instead of bringing equivalents to space from the Earth's surface provides an extraordinary advantage: it takes 24 times less energy to lift one pound off the moon compared to lifting one pound off Earth.

As the first step in this vision, Bezos announced the Blue Moon Lunar Lander, which would travel to the Moon aboard the New Glenn rocket, and soft land 3.6 metric tons of rovers, cargo and humans on the lunar surface. 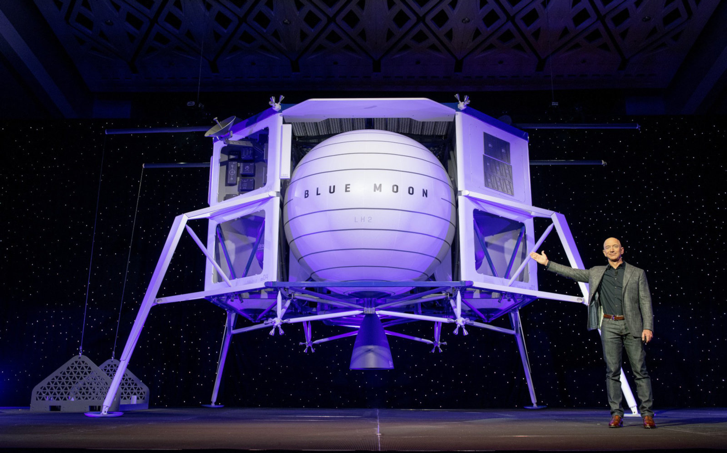 Importantly, this announcement and the fact that Blue has been working on Blue Moon for the past 3 years give added confidence to U.S. Vice President Mike Pence’s recent statement that: “It’s the stated policy of this administration and the United States of America to return American Astronauts to the Moon within the next 5 years (2024).”

In his May 9th Blue Moon presentation, Bezos added a perspective-shifting announcement driven by the teachings of the late professor Gerard O’Neill, a professor of physics at Princeton, the founder of the Space Studies Institute, and a man I consider a mentor. That shift addressed a key question that Professor O’Neill asked his students during a summer studies project, namely: “Is a planetary surface the best place for humans to live while they expand into the solar system?”

O’Neill eventually determined that the answer to this critical question is “No."

So instead of humankind living on other planets, O’Neill proposed that humanity build massive rotating cylinders, now known as O’Neill Colonies, manufactured from resources already outside the deep gravity well of a planet. Specifically, materials from the surface of the Moon or from asteroids.

Bezos revitalized and resurfaced O’Neill’s work by proclaiming that the vision for Blue Origin after reaching the Moon was to support the development of O’Neill Colonies, where humanity could live free of the deep gravity forces of planets. Each rotating colony would be able to support an independent population of 1 million individuals.

Not one to be overly optimistic, Bezos realizes that building these colonies will take generations and require overcoming an unimaginable number of engineering challenges along the way. But through Blue Origin, Bezos is actualizing some of the most fundamental prerequisite steps to achieving his vision of a universe of dynamism and growth.

Now let’s take a look at the other major force targeted at making humanity a multiplanetary species. A man whose incredible engineering prowess and vision has redefined what is possible in space.

After earning a degree from Wharton and dropping out of Stanford’s Ph.D. program, he repeated his software success with a $307M sale of Zip2.

With $180 million in his pocket, Musk set out to pursue what he considered the two most important missions for humanity: (1) Taking humans off fossil fuels via a thriving solar economy; and (2) Making humanity a multiplanetary species.

I first met Elon in late 2001 as he was selling PayPal to eBay and beginning to formulate his plans to open the space frontier.

SpaceX was founded in May 2002 as Elon’s instrument to develop the rockets needed to get humanity off the Earth to the Martian surface. SpaceX is a company born out of Musk’s courageous persistence and commitment.

In 2008, after three failures of his proof-of-concept ‘Falcon 1’ launch vehicle, Musk had run out of money. Thankfully, after a life-saving infusion of capital from his friend and PayPal cofounder, Peter Thiel, SpaceX succeeded on its fourth attempt. In December of 2008, SpaceX was awarded a billion-dollar NASA contract to develop their next-generation vehicle, called Falcon 9.

While the Space Shuttle could deliver payloads to the International Space Station for over $54,500 per kilogram, the Falcon 9 does the job for less than 5% of that cost at $2,720 per kilogram.

In seemingly automagical fashion, in 2015, SpaceX landed their first Falcon 9. Now, landings are routine for Falcon 9, with 33 successful landings out of 39 landing attempts.

Next on Falcon’s development path was the demonstration of Falcon Heavy, today the most powerful operational rocket in the world.

Falcon Heavy, which is composed of three modified Falcon 9 rockets strapped together, made its debut in early 2018 by launching Musk’s cherry-red Tesla Roadster past Mars and towards the asteroid belt.

In April of this year (2019), Falcon Heavy flew for the second time, with the successful and spectacular landing of all three Falcon 9 boosters.

Beyond delivering large payloads to Earth’s orbit, Falcon Heavy is capable of sending significant payloads to the Moon and even to Mars.

But the true workhorse for SpaceX is a vehicle once called BFR (standing for Big F***ing Rocket), today named Starship. Starship is central to Musk’s plan to put humans on the Moon, Mars, and beyond.

Musk has hinted that development costs for Starship will total $5B. If this number is accurate, developing this interplanetary spacecraft will be an order of magnitude less expensive than the $50B (in 2018 dollars) required to develop the Saturn V used in the Apollo program.

The rocket is designed to be able to explore the full extent of the solar system, using Mars and its abundance of resources as a fueling depot. 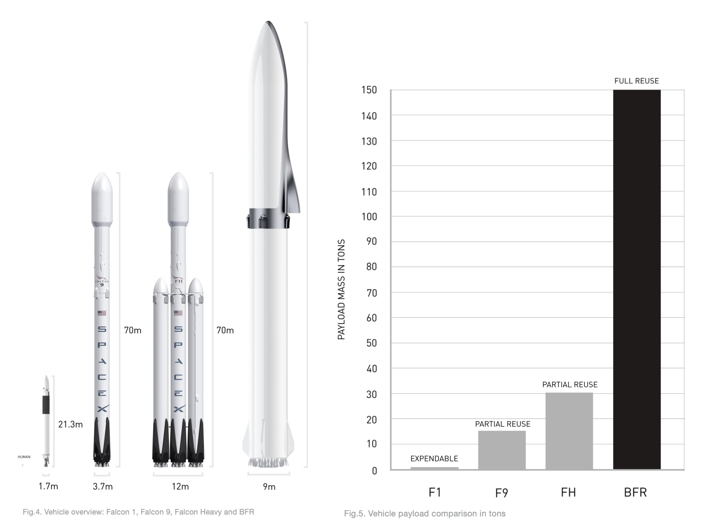 Using these vehicles, SpaceX is actualizing Musk’s vision to open up the solar system for human colonization.

Musk views a Mars colony as a contingency plan for humanity and a beacon of inspiration for humankind.

Each of SpaceX’s launch vehicles are tools in service of the movement towards building colonies and cities on the surface of Mars. Musk’s goal is to have humans on Mars before 2030 and a full city on Mars by 2050.

To achieve this goal, Musk and SpaceX are planning 10 launches between 2027 and 2050, one launch every 22-24 months, when Earth and Mars are at their nearest distance.

Outlined in Musk’s 2017 International Astronautical Congress presentation, these launches could begin as soon as 2024.

At the time, Musk addressed this bold timeline: “I feel fairly confident that we can complete the ship and prepare the ship for launch in about five years,” he said. “Five years feels like a long time to me.”

Moving beyond Mars, Musk wants to further explore the solar system, using Mars as a fueling depot on the way to other planets, moons, and asteroids.

Since Musk’s 2017 presentation, given the support and direction of NASA and the U.S. Vice President, SpaceX has been refocusing their Starship and Falcon Heavy development efforts towards bringing humankind back to the Moon, rather than going directly to Mars.

Dubbed #dearmoon, Maezawa’s goal is to inspire the world through art, by selecting 8 artists to join him on his maiden Starship voyage around the Moon.

If you had your pick, which artists would you send with Maezawa?

While SpaceX hasn’t released details of their Lunar lander concept, it is possible that SpaceX will use their rocket-landing skills to land Starship directly on the Moon.

Both Bezos and Musk are driven by their passion and belief that Humanity’s ultimate future requires our expansion into space. Both are developing privately funded, reusuable, human-carrying vehicles, and both, in the near-term, are heading towards the Moon.

One thing is for sure: regardless of who succeeds, everything humanity has ever held of value on Earth… metals, minerals, energy, real estate… are in near infinite quantities in space, and the greatest wealth ever anticipated will result as humanity reaches towards the stars.

Thanks to pioneers like Elon Musk and Jeff Bezos, we are on the verge of accessing this infinite cache of materials and energy for the continued expansion of humanity, and our progress towards increasing abundance.

As a result, we are about to see the greatest economic boom in human history, leading to a period of prosperity beyond our comprehension.

I, for one, wish to thank both Elon and Jeff for their passion and persistence. I am clear that their hurdles ahead are the most difficult of any humanity has ever undertaken.

The work that Musk and Bezos are doing today, IMHO, is perhaps the most important for the continuation of our species.

Ad Astra Per Ardua (to the stars with hard work).

(1) A360 Executive Mastermind: Want even more context about how converging exponential technologies will transform your business and industry? Consider joining Abundance 360. Our highly selective community of 360 abundance- and exponentially minded CEOs is on a 25-year journey — or as we call it, a “countdown to the Singularity." If you’d like to join our 2020 membership, apply here.