Earlier this month, I participated in a discussion/debate at the Vatican on the topic of: “The Morality of Immortality.”
The discussion was moderated by CNN medical anchor Dr. Sanjay Gupta, and included Rabbi Dr. Edward Reichman, Elder Dale Renlund, Reverend Father Dr. Nicancor Austriaco and NIH Director Dr. Francis Collins. 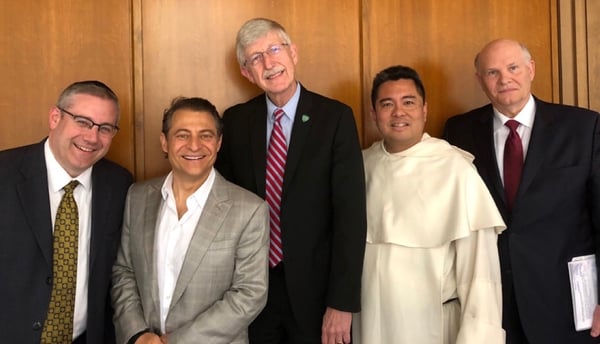 Here are a few compelling perspectives and insights from our discussion.

Is immortality moral? It’s important to recognize that our morals change over time.

Today, if I told you someone had the heart of a dead person transplanted into their chest to save their life, it would be considered a miracle. Go back 1,000 years, however, and the notion of organ transplantation would have been considered black magic.

Surrogate pregnancy is another modern-day miracle that, in another era, would not have been accepted.

At the start of our panel, Dr. Gupta asked Rabbi Dr. Edward Reichman, to provide a historical context from the Old Testament about aging.

Rabbi Reichman continues: “At the time of the flood of Noah, God pronounced that [humans] will be 120 years old. That did not occur immediately. [It] took roughly 750 years for the longevity of man to gradually taper down from roughly 900 years old to 120 years old.”

Rabbi Reichman cited the work of Nathan Aviezer, a contemporary scientist and physics professor in Israel who writes on the Torah from an Orthodox Jewish perspective. Aviezer’s interpretation is that, during this period, a divine intervention introduced specific genes which curtailed longevity, and it took several generations for these genes to proliferate and shorten the human lifespan.

“It could perhaps be that we are attempting to identify those genes that God introduced at that stage of history and now reverse it to achieve that longevity again,” explained Reichman.

From an evolutionary perspective, longevity wasn’t an advantage for most of history.

The selfish gene theory has no use for humans after reproductive age (typically age 13). By age 26, your child was now having a child, and, before food was abundant (e.g. Whole Foods), the best thing you could do was not take food out of the mouths of your grandchildren and instead give “your bits back to the environment.”

“Aging is not just a running down of the system,” said Dr. Collins. “It is a programmed process. Evolution probably had an investment in having the lifespan of a particular species not go on forever. You’ve got to get the old folks out of the way so the young ones have a chance at the resources.”

Today, thanks to an ever-increasing abundance of food, we’re able to live into old age without consuming resources that should have gone to our children and grandchildren.

When I was in medical school, I saw a documentary on certain species of whales, turtles and sharks that could live hundreds of years, and in theory, as long as 700 years.

I remember thinking, “If they can, why can’t we?”

As an engineer, I figured it was either a hardware or software problem.

Today we are finally entering an era where we are developing the tools to read the software and modify the hardware.

In his panel remarks, Dr. Francis Collins, who led the Human Genome Project and is the current director of the National Institutes of Health, shared how we’re already able to manipulate the longevity of simple organisms like the roundworm C. elegans.

“Research has shown that there is a limited set of genes that determine the lifespan of that little wriggly creature, and that with an appropriate manipulation of those genes, you can cause those worms not just to [live longer], but maybe as long as four or five times their normal lifespan,” Dr. Collins explained. “Imagine applying that to humans.”

My friend Ray Kurzweil, who co-founded Singularity University with me and is a Director of Engineering at Google, talks about the concept of “longevity escape velocity”. It’s the notion that, in the near future, science will be able to extend our life by over a year for every year we live.

Ray’s prediction is that we’ll reach longevity escape velocity in just 10 to 12 years.

What does that mean?

It means that my two 7-year-old boys can have a potentially indefinite lifespan, simply because they’ll intercept a multitude of exponentially growing technologies as they age.

Can we extend the healthy human lifespan past 120?

We’ll find out — and I believe we’ll discover the limits of longevity-extending technology in the next 20 or 30 years, not the next 50 or 100 years.

Longevity enables a variety of positive externalities. Why retire at 70 years old, at the peak of your earning capacity, when you could potentially contribute to society for another 30+ years?

Extending the human lifespan by 30 years -- and postponing the retirement age -- would generate the biggest global GDP boom ever.

Regardless of your religious beliefs, you’ll soon have the option to take advantage of life-extending technology. And if you don’t want to live to 250, you don’t have to.

In closing, I found it promising that all the religious leaders on my panel agreed that adding a healthy extra 30 years would be desirable. I agreed and said, “I’m happy with an age-span target of 120 healthy years, after that we can negotiate another extension.”

(1) A360 Executive Mastermind: This is the sort of conversation Peter explores at his Executive Mastermind group called Abundance 360. The program is highly selective, for 360 abundance and exponentially minded CEOs (running $10M to $10B companies). If you’d like to be considered, apply here.

Abundance-Digital is Peter’s ‘onramp’ for exponential entrepreneurs – those who want to get involved and play at a higher level. Click here to learn more.