Why Tech is Accelerating 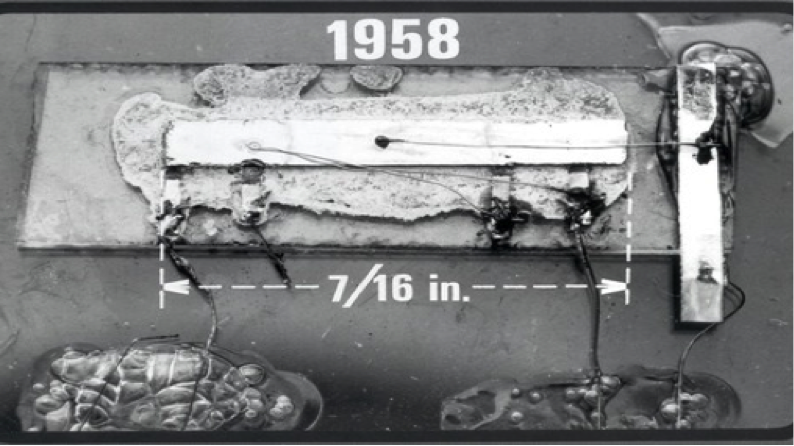 What you might not realize is that Moore's Law only refers to the exponential price-performance improvements of integrated circuits (over the last 50 years).

Did you know that exponential growth has been going on for a much longer period? Or that such growth is occurring in other fields outside of computing, such as communication and genomics?

Such exponential growth is actually described by "The Law of Accelerating Returns," a term coined by my friend and Singularity University Chancellor/Co-founder Ray Kurzweil.

This blog aims to explain the difference between Moore's Law and the Law of Accelerating Returns – an important distinction to understand for the exponentially minded.

What is Moore's Law?

In 1965, Gordon Moore (a founder of Intel) published a paper observing that between 1958 and 1965, the number of transistors on an integrated circuit have been doubling roughly every 18 to 24 months. He projected this would continue for some time. This concept has held true for 50 years and is known as "Moore's Law."

To get a gut feeling of Moore's law, let's look at the physical evolution of the microchip. In 1958, a scientist at Texas Instruments developed the first-ever integrated circuit. It had two transistors (the more, the better) with a "gate process length" (the smaller, the better) of about ½ inch. This scientist would go on to win the Nobel Prize. 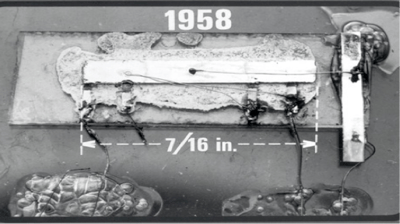 The first integrated circuit in 1958 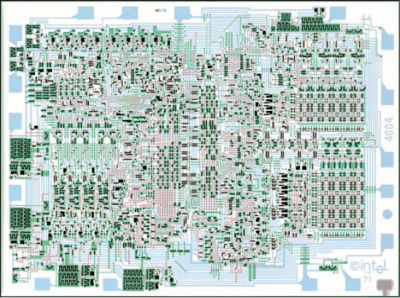 By this time, each transistor cost about $1, on average. 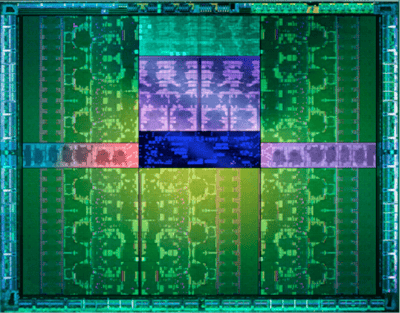 In 2012, Nvidia released a new graphical processor unit (GPU) with 7.1 billion transistors, a gate length of 28 nanometers, and processing power of 7GHz.

In just 40 years, the technology experienced a 100 billion-fold improvement, right on schedule for Moore's Law.

The Law of Accelerating Returns

But Moore's Law only describes the latest period (the 5th paradigm) of computational exponential growth.

As Ray Kurzweil described in his most excellent book, The Singularity Is Near, exponential growth in computation has existed for over a century, and has gone through five different paradigms of exponential growth:

Moore's Law (the 5th paradigm of computation) is therefore a subset of a much broader exponential principle described by Kurzweil's Law of Accelerating Returns. 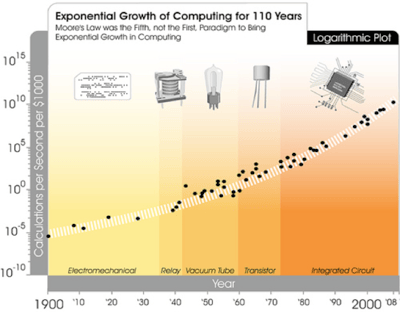 Graphic from Singularity is Near, demonstrating "Law of Accelerating Returns" in the field of computation

It's important to note that Ray recently mentioned to me that the sixth paradigm – three-dimensional computing – is already underway.

Why is Technology Accelerating?

To paraphrase Kurzweil… The Law of Accelerating Returns also explains exponential advancement of life (biology) on this planet. Looking at biological evolution on Earth, the first step was the emergence of DNA, which provided a digital method to record the results of evolutionary experiments. Then, the evolution of cells, tissues, organs and a multitude of species that ultimately combined rational thought with an opposable appendage (i.e., the thumb) caused a fundamental paradigm shift from biology to technology. The first technological steps -- sharp edges, fire, the wheel -- took tens of thousands of years. For people living in this era, there was little noticeable technological change in even a thousand years. By 1000 A.D., progress was much faster and a paradigm shift required only a century or two. In the 19th century, we saw more technological change than in the nine centuries preceding it. Then in the first 20 years of the 20th century, we saw more advancement than in all of the 19th century. Now, paradigm shifts occur in only a few years' time. The World Wide Web did not exist in anything like its present form just a decade ago, and didn't exist at all two decades before that. As these exponential developments continue, we will begin to unlock unfathomably productive capabilities and begin to understand how to solve the world's most challenging problems. There has never been a more exciting time to be alive.