P.P.S. Want to learn more about exponential technologies and home in on your Massively Transformative Purpose/ Moonshot? Abundance Digital, a Singularity University Program, includes 100+ hours of coursework and video archives for entrepreneurs like you. Keep up to date on exponential news and get feedback on your boldest ideas from an experienced, supportive community. Click here to learn more and sign up.

What it is: A team of researchers at the University of Cambridge’s Wellcome-MRC Cambridge Stem Cell Institute has discovered a critical component of the extracellular environment’s effect on our brain’s aging process. As a result, they’ve now uncovered a potential mechanism for reversing loss of function in brain stem cells, typically due to stiffening. The researchers first studied the function of oligodendrocyte progenitor cells (OPCs) — a type of stem cell critical for normal brain function and myelin reformation — by placing the OPCs of older mice into the far softer brain tissue of younger animals. Surprisingly, the older cells became rejuvenated, behaving more similarly to younger counterparts. The team then took its research a step further by removing Piezo1, a protein on the cell’s surface that detects whether its environment is soft or stiff. Once Piezo1 was removed, the OPCs were essentially tricked into believing their environment was soft, subsequently resuming normal, healthy function.

Why it’s important: In the near term, this discovery holds extraordinary potential to alleviate the pain of patients with Multiple Sclerosis, who suffer loss of function in both the brain and other parts of the nervous system. More broadly, however, this study demonstrates a key link between extracellular environment and the human aging process, opening new avenues for research and therapeutic applications. A major feat for longevity research, this and similar discoveries make aging research far more relevant to the well-funded study of other diseases, helping spur new funding for our extension of the human healthspan. | Share on Facebook.

Drone Ambitions Soar to the Stratosphere

What it is: Airbus, Boeing, and SoftBank are now developing stratospheric autonomous drones, capable of flying at (and even above) 60,000 feet. Intended to fly for months without intervention, the drones could deliver imaging and even internet services from above, generating a new market for commercial and military customers. Already, Airbus’s current iteration of its solar-powered Zephyr UAV weighs just 175 pounds yet touts a wingspan of 75 feet. Taking after this lightweight model, the stratospheric drones would be able to recharge batteries during the day to stay aloft at night. While seemingly a competitor to satellite connectivity providers like Starlink, OneWeb or TeleSat, these drones could additionally improve the link between ground and space satellites, according to the European Space Agency. This, in turn, would make upper stratospheric and space efforts far more complementary than competitive.

Why it’s important: According to research firm NSR, high-altitude aircraft (including stratospheric drones, balloons and airships) could generate $1.7 billion in revenue over the next decade. Despite the challenges of building aircraft light enough to fly above 60,000 feet, yet capable of withstanding turbulence at lower altitudes, there are already over 40 development programs currently under way. As both R&D and private sector investment continue on the rise, we will soon bring connectivity to upwards of 4 billion people currently without access to the web— no undersea cables or capital-intensive trenches needed. Last-mile connectivity costs will plunge, and anyone anywhere will be able to leverage the connected globe. | Share on Facebook.

What it is: In a new feat for telepresence robotics, Double has announced the third generation of its flagship telecommuting device. The company’s latest model, “Double 3” has vastly improved upon previous hardware, no longer consisting of a scooter-like mount topped with (separately purchased) iPad. Embedding a screen for remote interaction with the robot’s environment, Double 3 is additionally equipped with a suite of cameras and 3D sensors, enabling seamless self-driving and augmented reality integration. No longer needing to manually steer Double around the office, users can simply place a “pin” on their target location and the robot will automatically go there, avoiding all obstacles and people along the way. Further geared with high-resolution Pan-Tilt-Zoom cameras, the device grants remote workers anywhere the novel ability to collaborate with colleagues in a hyper-efficient, life-like way.

Why it’s important: In just the past 5 years, the number of employers that allow working from home has grown 40 percent. Yet beyond the benefits of no commute, a recent survey revealed that 86 percent of employees find they are more productive at home than in an office. Yet Double and similar telepresence robots provide teams the best of both worlds, offering the convenience of working from home, while still maintaining the efficiency of spontaneous “water cooler” conversations and in-person meetings. As investment in sensors, Artificial Intelligence and Augmented Reality surges year-to-year, the cost of producing telepresence hardware will continue to plummet. An indication of the technology’s growing commercialization, Suitable Technologies (Double’s main competitor) was recently acquired by Blue Ocean Robotics, as the company continues deploying its Beam robot. Amplifying the experience of decentralized teams, Double’s latest iteration could permeate a range of industries, from elder care to surveillance to supply chain management. How might your business leverage telepresence robotics in a growing decentralized workforce? | Share on Facebook. 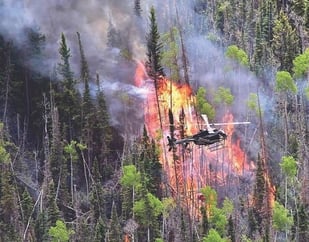 What it is: Utah University atmospheric scientist Adam Kochanski and a team of researchers are now refining a computer model with new data to predict how fires will spread and what weather events will follow in their wake. Initiating a “prescribed fire” — a controlled fire typically intended for habitat restoration in forest regions — the team used numerous infrared camera-fitted drones, laser scanning, and sensors to collect data while Kochanski tested his predictive model’s forecasts. While generated data is still being processed, the experiment is contributing to ‘coupled fire-atmosphere models,’ which leverage data to determine how wildfires influence local weather conditions, and the interaction of the two. Yet already, Kochanski’s model proved remarkably predictive of the experimental fire’s actual behavior.

Why it’s important: As wildfires grow ever more untamable and regions like the Amazon suffer detrimental losses, high-accuracy predictive models are more vital than ever before. Just in the last 10 decade, wildfires have decimated between 16,000 and 40,000 square kilometers of land in the U.S. each year, resulting in financial losses of US$5 billion. Paired with robust networks of sensors and autonomous drone fleets, computer models that incorporate weather conditions in AI forest fire mapping could help us to stem early fires before they gain momentum, saving forests, lives, and entire habitats. | Share on Facebook. 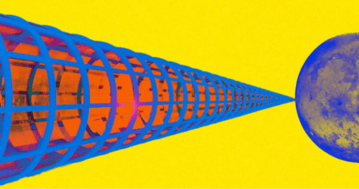 What it is: Space elevators have remained a science fiction moonshot since the Space Race of the 1960s. Building them would require cable material far stronger and lighter than any material currently discovered. However, in a newly published paper, researchers from Columbia and Cambridge universities describe Spaceline, a promising cable design made from known materials that could run from the surface of the Moon to geostationary orbit (approximately 36,000 kilometers above ground). Given that the elevator would not attach to Earth’s crust, the design eliminates numerous past engineering challenges, as rockets would only need to reach Spaceline’s endpoint, dock on the elevator, and be pulled to the Lunar surface.

Why it’s important: Rocketing into space (particularly with heavy cargo) is exorbitantly expensive, costing between US$10-20 million per metric ton of weight. Finding alternative methods of exiting the Earth’s atmosphere is therefore crucial for our democratization of space travel and extraplanetary discovery. In success, Spaceline could significantly lower the cost and challenge of modern-day rocket launches, possibly even allowing future researchers to tether orbital telescopes and research institutions between the Earth and Moon. Made far more accessible given its use of existing materials, Spaceline may not only forge a faster path to private space travel, but could enable new space-based research to fundamentally shift the way we understand our universe and our species’ place within it. | Share on Facebook. 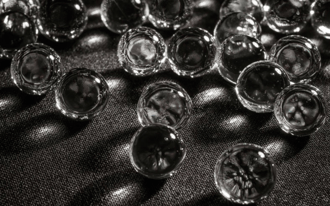 What it is: We often think of CRISPR in the context of genetically modified organisms or treatment of genetic diseases. Yet a team of researchers led by MIT bioengineer James Collins now has a new application for the gene-editing tool: smart materials that can shape-shift on command. Working with water-filled polymers held together by DNA strands called DNA hydrogels, the team used DNA-snipping enzyme Cas12a to alter the properties of these polymers. Programmed to recognize a specific DNA sequence and cut the targeted strand, Cas12a is now being used to build a number of CRISPR-controlled hydrogels that can change shape or dissolve completely to release a payload. Having demonstrated effectiveness, the team has even designed these hydrogels to release enzymes, drugs and human cells in response to programmed stimuli.

Why it’s important: Smart sensors for targeted drug delivery within the body have long been a hot topic of discussion, poised to revolutionize medicine with personalized and preventive care. Yet this research team’s CRISPR-controlled hydrogels could soon make this vision a practical reality. As expressed by Collins, “We’re in the CRISPR age right now [...] It’s taken over biology and biotechnology. We’ve shown that it can make inroads into materials and bio-materials.” Enabling constant monitoring of internal conditions, shape-shifting hydrogels and similar CRISPR-controlled materials might one day be capable of surrounding an infection with antibiotics the minute it appears, or releasing cancer drugs as soon as tumors are detected. Fortifying our bodies with an internal line of defense, smart biomaterials are slated to vastly increase the human healthspan, revolutionizing healthcare and the way we treat disease. | Share on Facebook.