What it is: Google and Daydream Labs recently partnered on a solution that allows everyone to see a VR headset user's entire face while immersed in a virtual experience, thereby minimizing the awkward nature of observing VR demonstrations on video. For the headsets to appear practically invisible, a 3D model of the user's face is created using a color and depth camera. The user then wears a modified HTC Vive headset with eye-tracking capabilities in front of a green screen – the background is composited from their Virtual Reality environment. The camera used to film this demo is calibrated to time-sync with the headset, which aligns the 3D face model with the user's actual face using a 'scuba mask effect' to eliminate viewer distractions. Google believes headset removal is the ultimate key to enhance communication and social interaction using VR.

Why it's important: One of VR's top anticipated breakthroughs from Peter's blog is the improvement in face tracking from head-mounted displays to perfectly convey one's appearance. Google's new technology has not only advanced face tracking capabilities, but it also offers an advanced demo viewing experience. As we continue to advance both the viewer and wearer's Virtual Reality experience, our ability to easily distinguish between "reality" and "virtual reality" will become more of a challenge -- in the future, the two will be nearly indistinguishable. | Join the Discussion

What it is: Using 3D printing, Polish medical student Jan Sylwester Witowski has created a patient-specific 3D model of a liver to help surgeons plan for operations. Based on CT scans from the patient and using a low-cost fused deposition modeling (FDM) technique, the full liver anatomy -- including blood vessels and tumors -- was constructed in about 72 hours for less than $150. Previous models, even those using 3D printing, have been limited to just one vessel or used more expensive techniques. From design to finished model, Witkowski and his team estimate that models could be created in about 160 hours, enabling plenty of time for teams of physicians to visually and tactilely inspect the model, discuss operating plans, and even bring the model into the operating room.

Why it's important: While we frequently discuss 3D printing in the context of generating replacement organs, this model shows how current technology can massively improve patient outcomes. In combination with augmented reality models, look for personalized models to move beyond surgical prep to serving as a tool for doctors to diagnose patients and effectively educate and communicate with them. | Join the Discussion 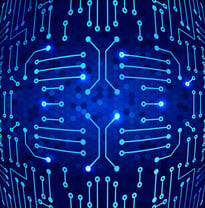 What it is: Professor Kourosh Kalantar-Zadeh, from the School of Engineering at RMIT University in Melbourne, has led an international team in overcoming some of the challenges in the fabrication of large electronic wafers. The promise of nanotech has been the ability to construct atom-thick semiconductors to improve processing speeds and enable flexible electronics, but current methods have been difficult to scale and require high temperatures. Here, the team used gallium and indium (which have a very low melting point) to create an atomically thin oxide layer that can be transferred to a wafer, successfully creating transistors and photodetectors with very high fabrication reliability at scale.

Why it's important: At each stage of Moore's Law, we find a new way to overcome the challenges of continuing the pace of development. Even as we expect quantum computing to make significant advances in the near future, look for traditional computing power to continue to increase, novel properties such as flexibility to emerge, and cross-pollination with quantum approaches. | Join the Discussion

What it is: Stanford chemistry professor Hongjie Dai and doctoral candidate Michael Angell recently discovered a low-cost solution for storing renewable energy during off hours. The high-performing, non-flammable battery is made using urea, an ingredient already mass-produced for plant fertilizers. The battery also contains electrodes derived from aluminum and graphite, which are both low-cost, abundant resources. This new battery is 100 times cheaper and takes only 45 minutes to charge compared to the performance of Dai's first rechargeable aluminum battery created in 2015. Due to this battery's low cost and high efficiency, Dai believes this battery takes us one step closer towards solar energy storage in every building and home.

Why it's important: Battery technology and renewables are hitting an inflection point. As Peter pointed out in his Disrupting Energy blog, one limitation of solar is its daytime-only availability. As the demand for renewable technologies continues to rise, so will the need for cheap, high-performing and efficient batteries to store energy for nighttime use. | Join the Discussion

What it is: Combining the concept of Universal Basic Income with the blockchain, the U.S.-based Grantcoin Foundation is creating the first digital currency backed by a nonprofit NGO. So far, some 1,132 people have received distributions, about $13,000 in value at the current exchange rate. Open to anyone who applies regardless of income, Grantcoin is adding 3.5% to the Grantcoin already in circulation, all of which are based on Basic Income grants to those who wish to participate.

Why it's important: As concern over automation and technological unemployment rises, we're seeing a simultaneous rise in the number of UBI experiments and pilots. Two noteworthy Grantcoin distinctions are its decision to issue grants based on interest rather than need, and its use of UBI as a benefit to currency adoption. | Join the Discussion

What it is: The Roads and Transportation Agency lead for Dubai recently announced at the World Government Summit that the city has plans to deploy a passenger-carrying drone this July. The passenger service will use the Ehang 184 autonomous electric drone to transport people by air -- more specifically, one passenger weighing up to 220 pounds for 31 miles at a top speed of 100 mph. The drones will be closely monitored and operated by Dubai officials from a centralized command center. Officials have already started test flying the drone in Dubai.

Why it's important: The city of Dubai is paving the roads -- and skies -- for a future where congested streets and the number of accidents on our roads reach all-time lows as a result of autonomous, flying vehicles. One of Peter's top Drone Highlights from the Consumer Electronics Show (CES) this year featured the Ehang 184, or "the Queen of the Copters," as Peter described it. | Join the Discussion

What it is: The Indian Space Research Organization (ISRO) officially set a new world record by launching 104 nano satellites into orbit from a single rocket -- taking the spot formerly held by Russia's 37-satellite launch in 2014. The rocket launched from the ISRO's space center in Sriharikota, carrying a 714 kg satellite for earth observation and another 100+ smaller satellites weighing 10 kg each (of these, three were Indian-owned and 96 were from U.S. companies). Kiran Kumar, chair of the space agency, hopes this record breaking launch positions India as one of the leading players in the private space market.

Why it's important: We are living during the birth of the commercial space era, driven by passionate billionaire backers. Peter's mention of "Conquest of Commercial Space" as one of the Top 10 Tech Trends Transforming Humanity is beginning to prove that this race to space is more than just a trend -- it's the future. | Join the Discussion

What it is: Everledger, founded by Leanne Kemp, has created a digital registry for diamonds based on the blockchain technology. Combining over 40 features such as color and clarity to create a unique digital ID, the company is creating a comprehensive digital record that traces a diamond's journey from mine to ring. Because the blockchain is a federated consensus rather than an individual certificate, Everledger can more reliably help combat insurance fraud and identify diamonds sourced from war zones. With over a million diamonds digitized already, the company is moving from cut to rough diamonds, and hopes to expand to other areas, like fine wines, where unique characteristics can be tied to a digital ID to prove authenticity.

Why it's important: From voting to contracts and now digital certificates tied to physical goods, we're seeing an explosion in use cases for the blockchain technology, proving that this technology is about far more than bitcoin and digital currencies. For digital certificates like Everledger, computer vision and deep learning advancements will create authenticity at far greater resolution. | Join the Discussion