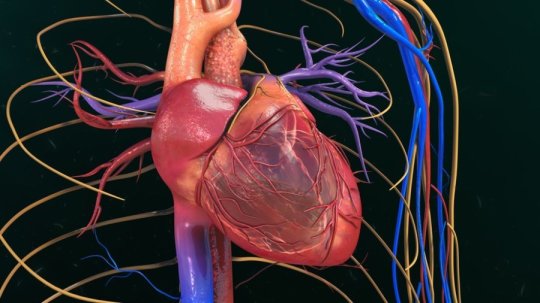 What it is: Scientists at The Gladstone Institutes have discovered a set of chemicals that can help transform scar tissue into healthy, beating heart muscle. This discovery enables new, effective treatments for heart failure via cellular reprogramming, or turning one type of adult cell into another. Scientists hope to integrate muscle cell regeneration with gene therapy and drugs to create better treatments and ultimately cure heart failure.

Why it's important: Peter's blog on Disrupting Today's Healthcare System mentioned how large-scale genomic sequencing and machine learning will help us better understand the root cause of heart disease and other cancers in the body. As we continue to improve our use of genomics and big data, we'll be able to eradicate conditions like cancer and heart disease -- which in turn enable us to extend the healthy human lifespan. | Join the Discussion

What it is: With the goal of modeling chips on the human brain and computing at the speed of light (and at greater bandwidth, neuromorphic and optical computing systems have been of huge interest -- separately. Now, scientists at Princeton have created an integrated silicon photonic neuromorphic chip, demonstrating that it computes at ultrafast speeds. Successfully combining photonics with neuromorphic chips should dramatically increase the speed of neural networks, somewhere in the "3 orders of magnitude" range, according to researchers. Tait and Co suggest that the near term applications could include "new regimes of ultrafast information processing for radio, control, and scientific computing."

Why it's important: We now have multiple areas of pursuit towards computational processing speed and modeling the human brain via chip design. Vastly smarter and faster computation is inevitable, particularly when approaches combine. Even more importantly, moving the complexity of neural networks and Artificial Intelligence to the chip level simplifies the programming experience, a step towards opening up cognitive computing to the masses. | Join the Discussion

What it is: Researchers from Stanford's Virtual Human Interaction Lab (led by Jeremy Bailenson, who will be speaking at Abundance 360 in January 2017), UCLA and Microsoft wondered what would happen if connecting with your future self via virtual reality might change how much you save for retirement. As it turns out, it does: their research found that participants who were greeted by their "future self" in Virtual Reality allocated over twice the retirement savings when compared to viewing their present-day image.

Why it's important: VR technology has the potential to shift perspectives, create empathy and enable lasting behavioral changes. In this example, engaging with an "Older Me" created a connection between our present and future, which altered present-day decision making. Tech-enabled "perspective shifts" have dramatic implications for psychiatric treatment, physical therapy, nutritional counseling, financial services and even travel. | Join the Discussion

What it is: A collaboration between Japan and Texas has produced a new computing system called the Hikari (Japanese for "light") -- the first microgrid in the U.S. that supports a supercomputer. Hikari runs on solar power (up to 208 kilowatts) during the day, and high voltage direct current, or HVDC -- resulting in a predicted 15% reduction in power use compared to conventional systems. One of the primary focuses for this development is to make data centers more sustainable by reducing an industry's overall power consumption.

Why it's important: As the Rising Billion come online and the planet's computational needs grow, we'll need increasingly efficient data centers. This solar-powered data center also incorporates other sustainable technologies, including a warm water-based liquid cooling system that streamlines the heat removal process. What happens to our global data-processing capabilities when powerful data centers can run completely off the grid? | Join the Discussion

What it is: University of California at San Diego engineers have made the first semiconductor-free, optically controlled microelectronic device. By using metamaterials, the device delivers a 1,000% increase in conductivity when activated by low voltage and a low-power laser.

Why it's important: Electronic passing through material can never be as fast as traveling in a vacuum. By liberating electrons from semiconductors to a gold plated metamaterial, this enables yet another advance in processing speed, not to mention very near-term devices that are faster and capable of handling more power, and to more efficient solar panels. Longer term, this type of structure might allow us to better understand and mimic photobiological systems like photosynthesis, or mitochondrial function. | Join the Discussion