How AR, AI, Sensors & Blockchain are Converging Into Web 3.0

For all of human history, the experience of looking at the world was roughly the same for everyone. But boundaries between the digital and physical are beginning to fade.

The world around us is gaining layer upon layer of digitized, virtually overlaid information — making it rich, meaningful, and interactive. As a result, our respective experiences of the same environment are becoming vastly different, personalized to our goals, dreams, and desires.

Welcome to Web 3.0, aka The Spatial Web. In version 1.0, static documents and read-only interactions limited the internet to one-way exchanges. Web 2.0 provided quite an upgrade, introducing multimedia content, interactive web pages, and participatory social media. Yet, all this was still mediated by 2D screens.

And today, we are witnessing the rise of Web 3.0, riding the convergence of high-bandwidth 5G connectivity, rapidly evolving Augmented Reality eyewear, an emerging trillion-sensor economy, and ultra-powerful AIs.

As a result, we will soon be able to superimpose digital information atop any physical surrounding—freeing our eyes from the tyranny of the screen, immersing us in smart environments, and making our world endlessly dynamic.

In this third blog of our five-part series on augmented reality, we will explore the convergence between Augmented Reality, Artificial Intelligence, smart sensors, and blockchain technology, diving into the implications through a key use case in manufacturing.

A Tale of Convergence

Let’s deconstruct everything beneath the sleek Augmented Reality display.

It all begins with Graphics Processing Units (GPUs) — electric circuits that perform rapid calculations to render images. (GPUs can be found in mobile phones, game consoles, and computers.)

However, because AR requires such extensive computing power, single GPUs will not suffice. Instead, blockchain can now enable distributed GPU processing power, and blockchains specifically dedicated to Augmented Reality holographic processing are on the rise.

Next up, cameras and sensors will aggregate real-time data from any environment to seamlessly integrate physical and virtual worlds. Meanwhile, body-tracking sensors are critical for aligning a user’s self-rendering in AR with a virtually enhanced environment. Depth sensors then provide data for 3D spatial maps, while cameras absorb more surface-level, detailed visual input. In some cases, sensors might even collect biometric data, such as heart rate and brain activity, to incorporate health-related feedback in our everyday AR interfaces and personal recommendation engines.

The next step in the pipeline involves none other than Artificial Intelligence. Processing enormous volumes of data instantaneously, embedded AI algorithms will power customized AR experiences in everything from artistic virtual overlays to personalized dietary annotations.

In retail, AIs will use your purchasing history, current closet inventory, and possibly even mood indicators to display digitally rendered items most suitable for your wardrobe, tailored to your measurements.

In healthcare, smart AR glasses will provide physicians with immediately accessible and maximally relevant information (parsed from the entirety of a patient’s medical records and current research) to aid in accurate diagnoses and treatments, freeing doctors to engage in the more human-centric tasks of establishing trust, educating patients and demonstrating empathy. 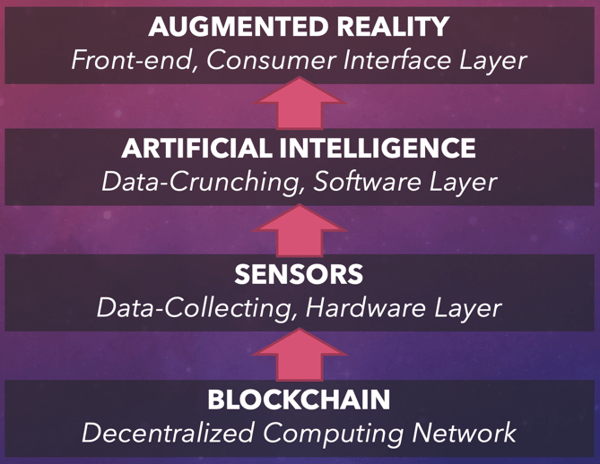 One of the nearest-term use cases of Augmented Reality is manufacturing, as large producers begin dedicating capital to enterprise AR headsets. And over the next ten years, AR will converge with Artificial Intelligence, smart sensors, and blockchain to multiply manufacturer productivity and employee experience. 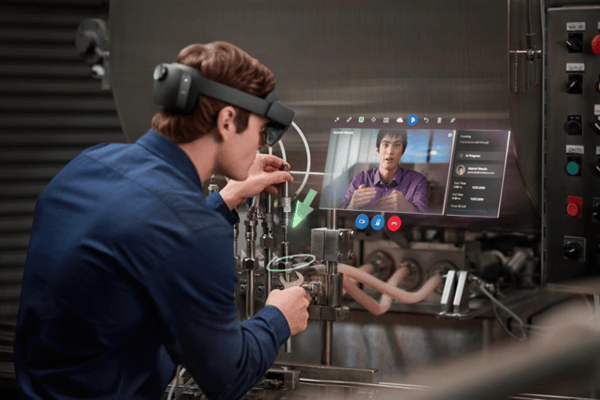 With similar success rates, Boeing brought Skylight’s smart AR glasses to the runway, now used in the manufacturing of hundreds of airplanes. Sure enough—the aerospace giant has now seen a 25 percent drop in production time and near-zero error rates.

Beyond cargo management and air travel, however, smart AR headsets will also enable on-the-job training without reducing the productivity of other workers or sacrificing hardware. Jaguar Land Rover, for instance, implemented Bosch’s Re’flekt One AR solution to gear technicians with “x-ray” vision: allowing them to visualize the insides of Range Rover Sport vehicles without removing any dashboards.

And as enterprise capabilities continue to soar, AIs will soon become the go-to experts, offering support to manufacturers in need of assembly assistance. Instant guidance and real-time feedback will dramatically reduce production downtime, boost overall output, and even help customers struggling with DIY assembly at home.

Perhaps one of the most profitable business opportunities, AR guidance through centralized AI systems will also serve to mitigate supply chain inefficiencies at extraordinary scale. Coordinating moving parts, eliminating the need for manned scanners at each checkpoint, and directing traffic within warehouses, joint AI-AR systems will vastly improve workflow while overseeing quality assurance.

After its initial implementation of AR “vision picking” in 2015, leading courier company DHL recently announced it would continue to use Google’s newest smart lens in warehouses across the world. Motivated by the initial group’s reported 15 percent jump in productivity, DHL’s decision is part of the logistics giant’s $300 million investment in new technologies.

As explained by Vital Enterprises CEO Ash Eldritch, “All these technologies that are coming together around artificial intelligence are going to augment the capabilities of the worker and that’s very powerful. I call it Augmented Intelligence. The idea is that you can take someone of a certain skill level and by augmenting them with artificial intelligence via augmented reality and the Internet of Things, you can elevate the skill level of that worker.”

Already, large producers like Goodyear, thyssenkrupp, and Johnson Controls are using the Microsoft HoloLens 2—priced at $3,500 per headset—for manufacturing and design purposes.

Perhaps the most heartening outcome of the AI-AR convergence is that, rather than replacing humans in manufacturing, AR is an ideal interface for human collaboration with AI. And as AI merges with human capital, prepare to see exponential improvements in productivity, professional training, and product quality.

On the hardware front, these AI-AR systems will require a mass proliferation of sensors to detect the external environment and apply computer vision in AI decision-making.

In ToF sensing, the HoloLens 2 uses numerous lasers, each with 100 milliwatts (mW) of power, in quick bursts. The distance between nearby objects and the headset wearer is then measured by the amount of light in the return beam that has shifted from the original signal. Finally, the phase difference reveals the location of each object within the field of view, which enables accurate hand-tracking and surface reconstruction.

With a far lower computing power requirement, the phased ToF sensor is also more durable than stereoscopic sensing, which relies on the precise alignment of two prisms. The phased ToF sensor’s silicon base also makes it easily mass-produced, rendering the HoloLens 2 a far better candidate for widespread consumer adoption.

Gaze tracking sensors are also slated to grant users control over their (now immersive) screens without any hand gestures. Conducting simple visual cues, even staring at an object for more than three seconds, will activate commands instantaneously.

And our manufacturing example above is not the only one. Stacked convergence of blockchain, sensors, AI and AR will disrupt almost every major industry.

While I’ll be doing a deep dive into sensor applications across each industry in our next blog, it’s critical to first discuss how we might power sensor- and AI-driven augmented worlds.

Because AR requires much more compute power than typical 2D experiences, centralized GPUs and cloud computing systems are hard at work to provide the necessary infrastructure. Nonetheless, the workload is taxing and blockchain may prove the best solution.

A major player in this pursuit, Otoy aims to create the largest distributed GPU network in the world, called the Render Network RNDR. Built specifically on the Ethereum blockchain for holographic media, and undergoing Beta testing, this network is set to revolutionize Augmented Reality deployment accessibility.

Alphabet Chairman Eric Schmidt (an investor in Otoy’s network), has even said, “I predicted that 90% of computing would eventually reside in the web based cloud... Otoy has created a remarkable technology which moves that last 10%—high-end graphics processing—entirely to the cloud. This is a disruptive and important achievement. In my view, it marks the tipping point where the web replaces the PC as the dominant computing platform of the future."

Leveraging the crowd, RNDR allows anyone with a GPU to contribute their power to the network for a commission of up to $300 a month in RNDR tokens. These can then be redeemed in cash or used to create users’ own AR content.

In a double win, Otoy’s blockchain network and similar iterations not only allow designers to profit when not using their GPUs, but also democratize the experience for newer artists in the field.

And beyond these networks’ power suppliers, distributing GPU processing power will allow more manufacturing companies to access AR design tools and customize learning experiences. By further dispersing content creation across a broad network of individuals, blockchain also has the valuable potential to boost AR hardware investment across a number of industry beneficiaries.

On the consumer side, startups like Scanetchain are also entering the blockchain-AR space for a different reason. Allowing users to scan items with their smartphone, Scanetchain’s app provides access to a trove of information, from manufacturer and price, to origin and shipping details.

Based on NEM (a peer-to-peer cryptocurrency that implements a blockchain consensus algorithm), the app aims to make information far more accessible and, in the process, create a social network of purchasing behavior. Users earn tokens by watching ads, and all transactions are hashed into blocks and securely recorded.

The writing is on the wall—our future of brick-and-mortar retail will largely lean on blockchain to create the necessary digital links.

Integrating Artificial Intelligence into Augmented Reality creates an “auto-magical” manufacturing pipeline that will fundamentally transform the industry, cutting down on marginal costs, reducing inefficiencies and waste, and maximizing employee productivity.

Bolstering the AI-AR convergence, sensor technology is already blurring the boundaries between our augmented and physical worlds, soon to be near-undetectable. While intuitive hand and eye motions dictate commands in a hands-free interface, biometric data is poised to customize each AR experience to be far more in touch with our mental and physical health.

The augmented world is only just getting started.

(1) A360 Executive Mastermind: Want even more context about how converging exponential technologies will transform your business and industry? Consider joining Abundance 360, a highly selective community of 360 exponentially minded CEOs, who are on a 25-year journey with me — or as I call it, a “countdown to the Singularity." If you’d like to learn more and consider joining our 2020 membership, apply here.

(Both A360 and Abundance-Digital are Singularity University programs.)