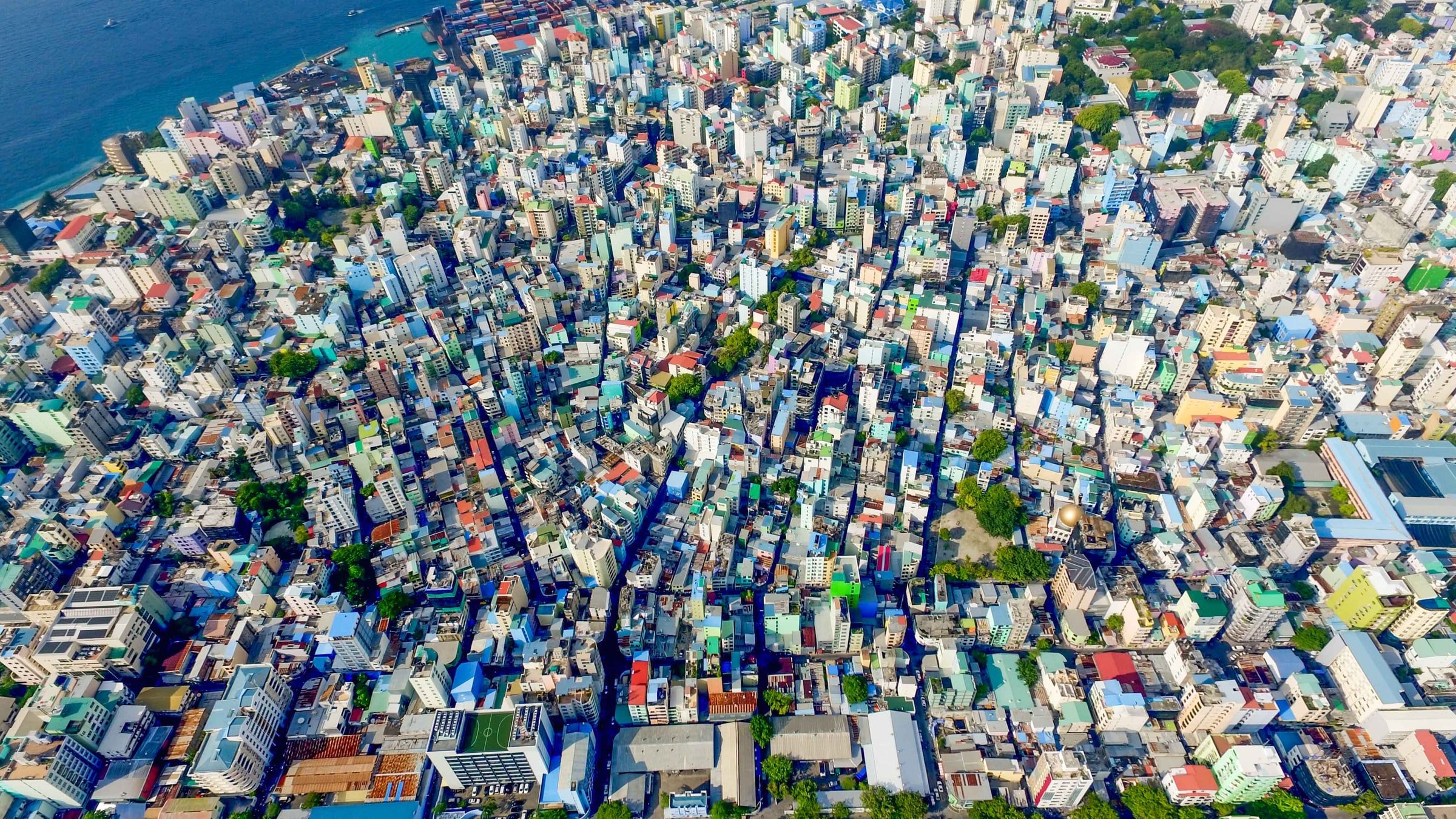 Worried about overpopulation and overcrowding?

Original estimates by the United Nations had the world’s population peaking at 10.9 billion people by 2100.

The Lancet, one of the world’s most prestigious medical journals, recently challenged the UN demographers’ forecast. They projected that the global population will peak at 9.7 billion by 2064 and decline to 8.8 billion by 2100.

With improved standard of living and declining reproductive rates, the problem is going to be global underpopulation.

And this could be disastrous. Fewer people overall mean fewer workers. The population will shift towards the elderly, creating a heavier burden on the working population.

In this blog, we’ll look at the data and details driving the underpopulation conclusion and the case for age-reversal, extending the healthy human lifespan.

THE TREND TOWARDS UNDERPOPULATION

In the 1980s, Paul Ehrlich released a book, The Population Bomb, that incited a worldwide fear of overpopulation. He said that too many people, packed into too-tight spaces, would take too much from the Earth. Unless humanity cut down its numbers, all of us would face “mass starvation” on “a dying planet.”

Now, let’s take a closer look at the UN Population Division and disprove that.

Total fertility rate (TFR) is a metric that demographers use to measure the number of offspring per parent. The population replacement rate, which is the average number of children per family for each generation to exactly replace itself, is roughly 2.1. 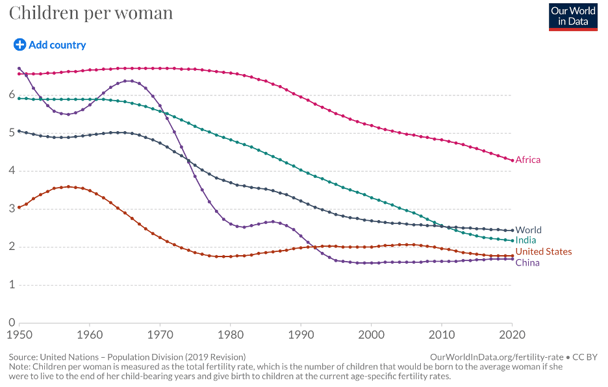 But a lot has changed since then.

Today is VERY different: As of 2020, the global average fertility rate has more than halved to 2.44.

What is the reason for this unprecedented decline? In short, there are three major reasons: the empowerment of women, declining child mortality, and a rising cost of raising children.

Today, roughly 80% of the world’s population lives in countries with a fertility rate below 3. Only 10% live in countries where women, on average, have more than 5 children.

For example, while China and India previously had total fertility rates above 5, each country has sharply declined rates around 2 today.

Africa, on average, remains high but has more recently begun to rapidly decline.

Several countries now have a fertility rate that is significantly below the replacement level.

The TFR in the United States is currently 1.77. And women in countries such as Iran and Thailand have just 1.6 children on average.

And the COVID-19 pandemic seems to have accelerated this trend toward underpopulation. Historically, there’s been a spike in births nine months after disasters and some people are wondering whether there will be a COVID baby boom.

But it’s more complicated than that.

Many people are now more unsure of their financial safety. Childcare during the pandemic has been difficult. Parents are cut off from extended family, who would have been part of a newborn’s upbringing.

And the numbers reflect these trends. Clinics are reporting an increase in requests for birth control prescriptions and abortion medications. The pandemic has changed the way the world thinks about having children—it might even bring the world closer to underpopulation sooner than we think.

Back in April 2021, when I interviewed Elon Musk for the launch of the $100M XPRIZE Carbon Removal, I asked him about his concern of underpopulation. He shook his head and said, “Earth is going to face a massive population collapse over the next 20 to 30 years… this would be civilization’s way of dying with a whimper.”

When I speak publicly about longevity and age-reversal, one of the routine arguments against this work is public concern for “overpopulation”. As demonstrated above, the reality is that the world is facing a threat of underpopulation, and increasing healthspan by a decade or two may be a critical step in maintaining increased abundance for humanity.

More than ever, we need to increase our productive and healthy lifespan. Not only will this allow us to spend more time with loved ones and fulfill our bucket list dreams—it also has the potential for enormous economic value.

Researchers from Harvard, Oxford, and London Business School recently demonstrated just how much increasing healthy lifespan is worth in dollars.

Slowing aging by only one year is worth +$38 trillion to the global economy.

That is just one year.

Imagine the societal benefits and economic value of increasing healthy lifespan by 10-20 years.

Here are some of the technologies that will get us there:

(1) Improvements in diagnostic medicine will change “sick-care” to healthcare. We practice reactive medicine, when it should be preventive medicine. This is crucial to increasing longevity.

Cancer is still one of the most feared words in medicine. But what if we could diagnose cancer early? A stage I cancer is infinitely easier to treat than a metastatic stage IV. The number one thing you can do to fight and survive cancer is to find it early.

GRAIL is one of the most promising diagnostic breakthroughs of the decade. It’s a liquid biopsy––a blood test that can detect most major types of cancer at an early stage. It searches for tiny fragments of DNA and RNA that have been released into the bloodstream by a tumor that reflect the tumor’s genomic features. It’s so sensitive it can detect even a faint signal that an early tumor exists. Its ultimate mission is to offer one test that can simultaneously scan for every type of cancer.

(2) CRISPR and gene therapy. Single point gene mutations make up roughly two-thirds of known human genetic variants associated with disease. This is where the revolutionary gene-editing technology CRISPR comes in. Its “molecular scissors” are able to snip a stretch of DNA and either disable the affected sequence or replace it with a new, correct one. The allure of this kind of therapy is that it’s a one-time treatment that cures the disease. The possibilities that CRISPR have opened up are endless. The most recent landmark CRISPR trial from June 2021 showed its effectiveness against a form of amyloidosis, an incurable disease that involves misfolded proteins depositing in and destroying organs.

These advancements in genome editing can also be used to increase your healthy lifespan. Dr. David Sinclair of Harvard Medical School has engineered a virus to deliver a combination of three Yamanaka genes. These genes are responsible for creating induced pluripotent stem cells. When these viruses were injected into the eyes of mice, their eyes became younger. In the case of glaucoma and aging, all the mice got their vision back. The hypothesis is that this technology can be applied to other parts of the body. Imagine a rejuvenation of our aging bodies.

(3) Organ regeneration. As our organs begin to tire and age, finding a way to regenerate them will be vital to increasing healthy lifespan. Dr. Deepak Srivastava, President of the Gladstone Institutes, is using gene therapy to repair heart damage with an approach we personally like to call cellular alchemy. He’s reprogramming scar tissue to become a new heart cell. After injecting these genes into the heart after a heart attack, they were able to change the fate of the scar cells, turning them into beating hearts. No need to GATTACA clone humans to provide an extra set of organs. We can regrow our own organs from within us.

MY CONCLUSIONS—WHAT DO YOU THINK?

Contrary to popular belief, the world is facing the threat of under population as a result of the sharp decline in global reproductive rates.

On top of that, an increasing proportion of our world is likely to face one of the most crippling and major causes of physical suffering: a disease called aging.

This calls for increasing not just lifespan, but healthy and productive lifespan.

Thankfully, due to the convergence of Artificial Intelligence and medically related exponential technologies, advancements in age reversal are already happening at an accelerated rate.

There is a reason the longevity industry has been named the biggest and most complex industry in human history. On the bright side, this has become a massive opportunity for innovation.

At XPRIZE, we are working to fund and launch a $100M Age Reversal XPRIZE with the goal of demonstrating a 25% lifespan “age-reversal” (more details on this as the guidelines and funding are solidified).

In the meantime, our goal (yours, mine, and everyone in our global community) should be to live long enough to intercept the next bridge of technology, and the next one, and so on.

While it sounds next to impossible and almost too sci-fi for our imaginations to grasp, I ensure you that many brilliant minds are working to crack this challenge. And, without question, age-reversal will be one of the biggest business opportunities on Earth and economic benefits for humanity.

Why an Exponential Mindset is CRITICAL for Entrepreneurs