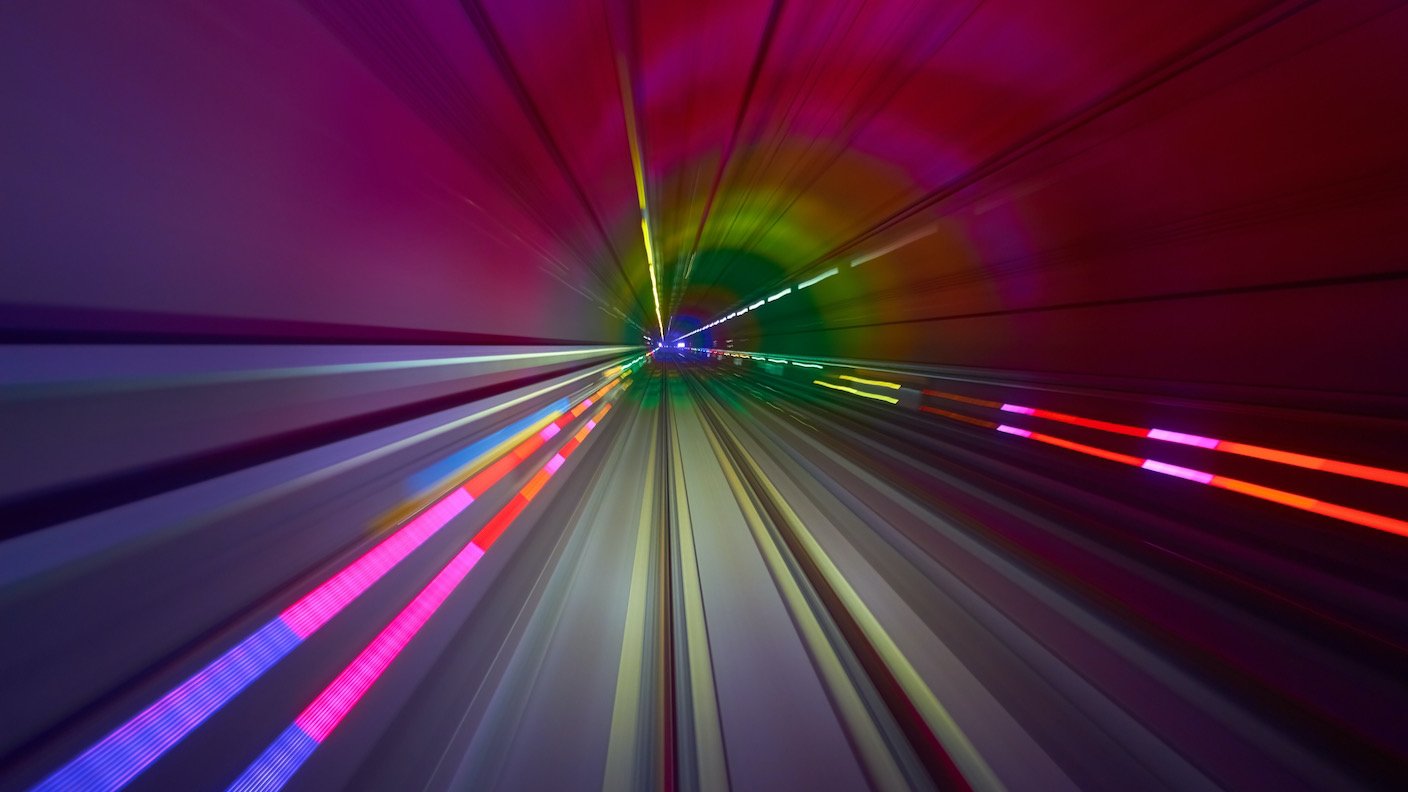 Thanks to advances in internet speed, we can now download the entire Netflix catalog in less than a second.

Have you ever wondered why the internet didn’t break when the COVID-19 pandemic hit?

In a matter of weeks, online habits for millions of people around the world changed dramatically. Kids went to school on Zoom, and adults followed suit at work. Desperate to escape, many people binged on Netflix.

According to the OECD, demand for internet bandwidth skyrocketed—as much as 60% by May 2020.

And yet the internet itself seemed… mostly fine. There were no headlines of mass outages or server farms catching fire.

The answer is good planning years in advance.

In the next several years, billions of additional minds are about to come online and join the conversation.

And to meet tomorrow’s demands, we must start building a more capable internet today.

That’s the job of researchers in labs around the world.

For example, researchers at Japan’s National Institute of Information and Communications Technology (NICT) recently announced that they have set a new record for internet speed: a whopping 319 terabits per second.

Discussing how the internet, the world’s largest network, will continue to evolve and create new business opportunities is a key focus of my year-round coaching program Abundance360.

In today’s blog, we’ll look at how the NICT team achieved this new record and what it means for the future of the internet.

(This article originally appeared on SingularityHub by Jason Dorrier, adopted by Peter Diamandis for his Abundance Community.)

HOW FAST IS 319 TERABITS PER SECOND?

Let’s put this number into perspective.

In August 2020, researchers at University College London set a new record for internet speed at the time: 178 terabits per second.

This means that they could download Netflix’s entire catalog in 1 second.

So, a year later, the NICT team has nearly doubled that record and halved the amount of time it would take to download the Netflix catalog.

HOW THE NICT TEAM BROKE THE RECORD

The fastest internet signals are made up of data converted to pulses of light and sent flying down bundles of hair-like glass strands called fiber optics. Fiber optic cables enable far faster data transmission with less loss than traditional copper wires. Millions of miles of fiber now crisscross continents and traverse oceans. This is the web in its most literal sense.

With all that infrastructure in place, researchers are trying to figure out how to jam more and more data into the same basic design—that is, keep things more or less compatible but improve the number of Netflix libraries per second we can download.

They can do that in a few ways.

First, light has wave-like properties. Like a wave on water, you can think of a light wave as a series of peaks and troughs moving through space. The distance between peaks (or troughs) is its wavelength. In visible light, shorter wavelengths correspond to bluer colors and longer wavelengths to redder colors. The internet runs on infrared pulses of light that are a bit longer than those in the visible band.

We can code information in different wavelengths—like assigning a different “color” of light for each packet of information—and transmit them simultaneously. Expand the number of wavelengths available and you increase the amount of data you can send at the same time. This is called wavelength division multiplexing.

That’s the first thing the team did: They expanded the selection of “colors” available by adding a whole band of wavelengths (the S-band) that had only been demonstrated for short-range communication previously. In the study, they showed reliable transmission including the S-band over a distance of 3,001 kilometers (nearly 2,000 miles).

The trick to going the distance was two-fold. Fiber cables need amplifiers every so often to propagate the signal over long distances. To accommodate the S-band, the team doped—that is, they introduced new substances to change the material’s properties—two amplifiers, one with the element erbium, the other with thulium. These, combined with a technique called Raman amplification, which shoots a laser backwards down the line to boost signal strength along its length, kept the signals going over the long haul.

While standard long-distance fiber contains only a single fiber core, the cable here has four cores for increased data flow. The team split data into 552 channels (or “colors”), each channel transmitting an average 580 gigabits per second over the four cores.

Crucially, though, the total diameter of the cable is the same as today’s widely used single-core cabling, so it could be plugged into existing infrastructure.

Next steps include further increasing the sheer amount of data their system can transmit and lengthening its range to trans-oceanic distances.

FINAL THOUGHTS: IMPLICATIONS FOR THE FUTURE OF THE INTERNET

This kind of research is only a first step to experimentally show what’s possible—as opposed to a final step showing what’s practical.

It’s worth noting that although the speeds achieved by the NICT team could fit into existing infrastructure, we would need to replace existing cables.

The prior UCL work, which added S-band wavelengths over shorter distances, focused on maximizing the capacity of existing fiber cables by updating just the transmitters, amplifiers, and receivers. Indeed, that record was set on fiber that first hit the market in 2007. In terms of cost, this strategy would be a good first step.

Eventually, though, old fiber will need replacing as it approaches its limits. Which is when a more complete system, like the one that NICT is investigating, would come in.

As rapidly-evolving exponential technologies continue to converge, faster internet speeds will be a key aspect of global gigabit connectivity connecting everyone and everything, everywhere—at ultra-low cost.

Bringing online an additional 3 billion individuals will drive tens of trillions of dollars into the global economy.

How will you take advantage of this coming wave?

Can CRISPR Gene Therapy Be a Single Injection?