The causes of aging are extremely complex and unclear.

But with longevity clinical trials nearly doubling, from 73 in 2012 to over 145 in 2018, more answers — and questions — are emerging than ever before.

With the dramatic demonetization of genome reading and editing over the past decade, and Big Pharma, startups, and the FDA starting to face aging as a disease, we are starting to turn those answers into practical ways to extend our healthspan.

Here, in Part 2 of a series of blogs on Longevity technology & Vitality research, I explore how genome sequencing and editing, along with new classes of anti-aging drugs, are augmenting our biology to further extend our healthy lives.

In this blog I’ll cover two classes of emerging technologies: 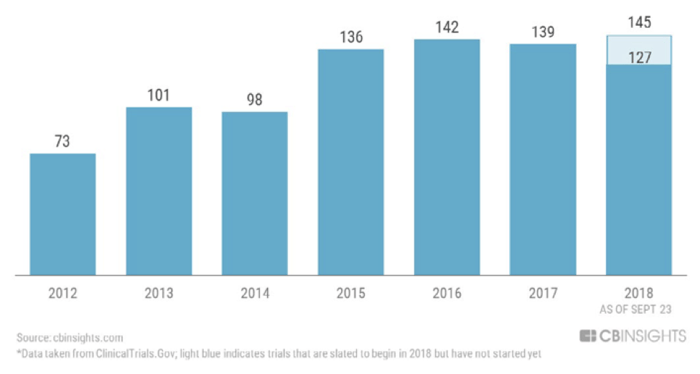 Figure: Clinical trials targeting aging have seen steady growth over the past 6 years.

Your genome is the software that runs your body.

A sequence of 3.2 billion letters makes you “you.” These base pairs of A’s, T’s, C’s and G’s determine your hair color, your height, your personality, your propensity to disease, your lifespan, and so on.

Until recently, it's been very difficult to rapidly and cheaply "read" these letters — and even more difficult to understand what they mean.

Today, the cost of genome sequencing has dropped below $500, and according to Ilumina, the world’s leading sequencing company, the process will soon cost about $100 and take about an hour to complete.

This represents one of the most powerful and transformative technology revolutions in healthcare.

When we understand your genome, we'll be able to understand how to optimize "you."

In addition to reading the human genome, scientists can now edit a genome using a naturally occurring biological system discovered in 1987 called CRISPR/Cas9.

Here’s how it works:

Most importantly, CRISPR is cheap, quick, easy to use, and more accurate than all previous gene editing methods.

As a result, CRISPR/Cas9 has swept through labs around the world as the way to edit a genome.

A short search in the literature will show an exponential rise in the number of CRISPR-related publications and patents. 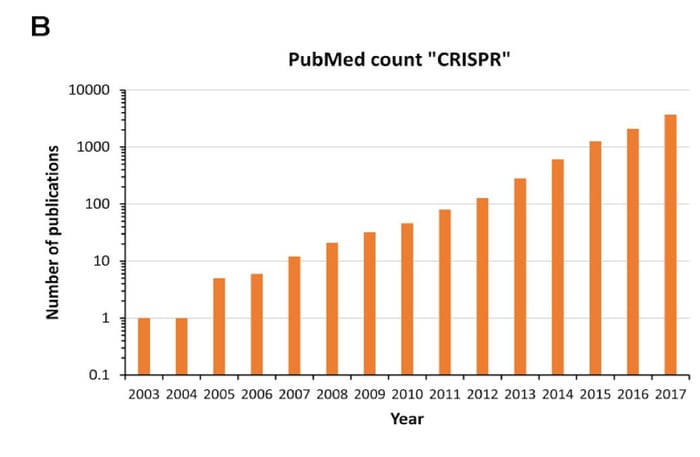 Early results are impressive. Researchers from the University of Chicago recently used CRISPR to genetically engineer cocaine resistance into mice.

Researchers at the University of Texas Southwestern Medical Center used CRISPR to reverse the gene defect causing Duchenne muscular dystrophy (DMD) in dogs. (DMD is the most common fatal genetic disease in children.)

With great power comes great responsibility, and the opportunity for moral and ethical dilemmas.

In 2015, Chinese scientists sparked global controversy when they first edited human embryo cells in the lab with the goal of modifying genes that would make the child resistant to smallpox, HIV, and cholera.

Three years later, in November 2018, researcher He Jiankui informed the world that the first set of CRISPR-engineered female twins had been delivered.

To accomplish his goal, Jiankui deleted a region of a receptor on the surface of white blood cells known as CCR5, introducing a rare, natural genetic variation that makes it more difficult for HIV to infect its favorite target, white blood cells.

Setting aside the significant ethical conversations, CRISPR will soon provide us the tools to eliminate diseases, create hardier offspring, produce new environmentally resistant crops, and even wipe out pathogens.

Over the arc of your life, the cells in your body divide until they reach what is known as the Hayflick limit, or the number of times a normal human cell population will divide before cell division stops, which is typically about 50 divisions.

What normally follows next is programmed cell death or destruction by the immune system.

A very small fraction of cells, however, become senescent cells and evade this fate to linger indefinitely.

These lingering cells secrete a potent mix of molecules that triggers chronic inflammation, damages the surrounding tissue structures, and changes the behavior of nearby cells for the worse.

Senescent cells appear to be one of the root causes of aging, causing everything from fibrosis and blood vessel calcification to localized inflammatory conditions such as osteoarthritis to diminished lung function.

Fortunately, both the scientific and entrepreneurial communities have begun to work on senolytic therapies, moving the technology for selectively destroying senescent cells out of the laboratory and into a half-dozen startup companies.

Prominent biotech companies in the field include the following:

In recent years, researchers have identified or designed a handful of senolytic compounds that can curb aging by regulating senescent cells. Two of these drugs that have gained mainstay research traction are rapamycin and metformin.

PureTech Health subsidiary resTORbio (which started 2018 by going public) is working on a rapamycin-based drug intended to enhance immunity and reduce infection. Their clinical-stage RTB101 drug works by inhibiting part of the mTOR pathway.

Results of the drug’s recent clinical trial include:

Impressive, to say the least.

Researchers have found that Metformin also reduces oxidative stress and inflammation, which otherwise increase as we age.

There is strong evidence that Metformin can augment cellular regeneration and dramatically mitigate cellular senescence by reducing both oxidative stress and inflammation.

Over 100 studies registered on ClinicalTrials.gov are currently following up on strong evidence of metformin’s protective effect against cancer.

Beyond cellular senescence, certain critical nutrients and proteins tend to decline as a function of age. Nutraceuticals combat aging by supplementing and replenishing these declining nutrient levels.

NAD+ exists in every cell, participating in every process from DNA repair to creating the energy vital for cellular processes. It’s been shown that NAD+ levels decline as we age.

These are just a taste of the tremendous momentum that longevity and aging technology has right now.

As artificial intelligence and quantum computing transform how we decode our DNA and how we discover drugs, genetics and pharmaceuticals will become truly personalized.

The next blog in this series will demonstrate how artificial intelligence is converging with genetics and pharmaceuticals to transform how we approach longevity, aging and vitality.

Each year at Abundance 360, I host a panel of world-class longevity researchers and CEOs to update our members on the current state and near future of these technologies.

Next week, I’ll be joined by Dr. Robert Hariri, Founder and CEO of Celularity, legendary investor Jim Mellon of Juvenescence, and Dr. Joan Mannick, Co-Founder and Chief Medical Officer at resTORbio for a conversation on Vitality and Longevity research. To join us via livestream, visit here to apply for my Abundance Digital Community.

We are edging closer toward a dramatically extended healthspan — where 100 is the new 60. What will you create, where will you explore, and how will you spend your time if you are able to add an additional 40 healthy years to your life?