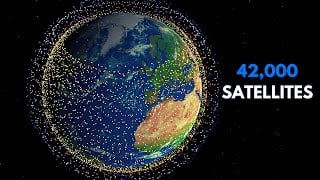 We are blanketing the planet in digital connectivity at an accelerating rate.

In the realm of ground-based cellular networks, by 2025 there will be 2.8 billion humans connected on ubiquitous 5G (both licensed and unlicensed). At the same time, 6G is also under development, which will be 100x faster.

In Earth’s orbit, a number of multi-thousand-satellite networks (Starlink, E-Space, Kuiper, etc.) are being deployed that will ultimately cover every square meter of the Earth. Thus far, Starlink is the largest orbiting network with 3,000+ operational satellites, heading towards a goal of tens of thousands.

In today’s blog, we’ll look at how “mega-constellations” of satellites and the rollout of 5G and 6G networks will usher in a new era of abundance and innovation.

In the coming decade, billions of “new minds” will be connected to the internet—at gigabit connection speeds and at near-zero cost. What will these new consumers and innovators create and consume?

By 2032, every person on Earth will have access to the web with speeds and capabilities far beyond what heads of nations and Fortune 500 CEOs had just a few decades ago.

This revolution in connectivity will ignite a renaissance of innovation, and once again transform our planet.

In November 2022, according to the demographers at the United Nations Population Division, the world’s population reached 8 billion. And about 64% of people around the world have access to the internet.

As the other 30% of humanity (~ 2 billion+) gain access, what will these additional new minds discover? What will they buy? How will they entertain themselves? What new products and services will they create? What industries will they disrupt?

Increased connectivity flattens and shrinks the world. It also raises the quality of both our personal and professional lives.

Three areas where we can see this clearly are in education, hiring and staffing, and entertainment.

Google and Wikipedia are perhaps the most obvious examples of increased access to information around the world.

Another striking example of the demonetization and democratization of education and learning is the rise of free online courses offered by the world’s leading universities, and programs like Khan Academy.

Over the last 10 years, over 1,000 universities have created tens of thousands of Massive Open Online Courses, reaching hundreds of millions of eager learners around the world.

For example, in the past several months alone, more than 200 universities (including Harvard, Stanford, and MIT) have announced over 850 such free online courses—on topics ranging from computer programming fundamentals to neuroscience.

The Covid-19 pandemic has proven the productivity of remote working, and companies are now accessing the abundant pool of talent from around the world.

The accelerating trend of remote work, offshoring talent, and the increasing adoption of digital collaboration tools such as Slack and Zoom mean that it’s easier than ever to access the global pool of talent.

Does it make sense to hire people in New York or San Francisco when you can find similar (or even superior) talent at much lower cost in eastern Europe, Asia, and South/Central America?

As Matt Mullenweg, CEO of Automattic and Co-founder of WordPress, puts it: “In Silicon Valley, you have the big tech companies fishing from essentially the same small pond or bay. By making the company distributed, we can fish from the entire ocean.”

Widening access to the internet has impacted every aspect of how we entertain ourselves—from streaming movies and television shows to how we interact with artists and creators online.

One of the best examples of the influence of increasing connectivity is in the growth of online gaming.

In 2020, the global online gaming market generated over $21 billion in revenue, a 22% increase on the previous year. A key driver of this growth was the Covid-19 pandemic, which forced many people to stay at home and turn to digital forms of entertainment and find new ways to connect with others.

And this growth is set to continue.

There are currently about 1 billion online gamers in the world, with China, Japan, and South Korea repressing the biggest shares of that population. By 2025, the number of online gamers globally is projected to pass 1.3 billion.

These are just a few examples of the benefits of global connectivity.

Now let’s look at the two technologies in particular that will bring us all the benefits of a more connected world.

In the 1990’s, the earliest generation of low-Earth orbit (LEO) and medium-Earth orbit constellations were proposed and some deployed. They included systems like Iridium, Global Star, and Teledesic... but none were commercial successes, none could compete with the rapid growth of ground based cellular networks. The technology just wasn’t good enough and launch costs were too high.

Let’s look at the 3 top companies making this a reality: one of these is in the process of deployment and the other two are under development. 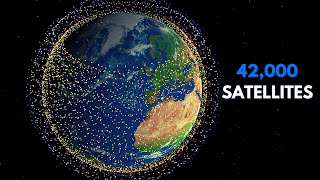 The mission of Starlink, the satellite network developed by SpaceX, is to bring low-cost, high-speed broadband to as many people as possible around the world.

Starlink works by beaming data signals between thousands of LEO satellites overhead and gateway stations back on Earth. The current generation of Starlink satellites weighs about 573 pounds and has a lifespan of 5 years in orbit.

As of November 2022, there are roughly 3,271 Starlink satellites orbiting Earth, serving more than 500,000 subscribers across 40 countries, including Ukraine.

Starlink’s goal is to eventually deploy as many as 42,000 satellites orbiting the Earth as part of a mega-constellation.

As the Starlink team notes, "People across the globe are using Starlink to gain access to education, health services and even communications support during natural disasters."

In success, Starlink will not only serve fixed locations on the ground, but also boats and planes in transit.

And Starlink is not alone.

Kuiper aims to build, deploy, and operate a constellation of satellites in low-Earth orbit to bring high-speed internet access to unserved and underserved parts of the world.

Since gaining approval by the US Federal Communications Commission (FCC) in 2020 to deploy and operate a constellation of 3,236 satellites, Amazon has secured up to 92 heavy-lift launches with space launch companies Arianespace, Blue Origin, and United Launch Alliance (ULA).

According to the Project Kuiper team, they will use the findings from this prototype mission to “help finalize design, deployment, and operational plans for our commercial satellite system, which will provide reliable, affordable broadband to customers around the world.”

Mega-constellation company E-Space, founded by industry pioneer Greg Wyler, announced plans earlier this year to launch a network of more than 100,000 low-Earth orbit satellites to serve business and government customers around the world.

But with plans for so many satellites orbiting Earth, how will the company combat space clutter and minimize the effects of collisions?

But E-Space says that it will leave low-Earth orbit actually “cleaner than before its satellites are launched”, because its network will collect and “deorbit” debris even as it’s providing its connectivity services back on Earth.

For example, E-Space satellites are being designed to crumple rather than break apart when they’re struck. And the satellites will also “entrain” debris they encounter and automatically deorbit once a certain amount has been collected.

As Wyler puts it, “Like oysters in the river that filter the river and clean it, our satellites are the first to be designed to clean space,” he said. “The more satellites we have, the cleaner space will be.”

So, when can we expect E-Space satellites to begin providing connectivity?

E-Space has already deployed its first 3 prototype satellites, and the company plans to launch another batch early 2023, before moving into an initial phase of production.

The jump from 3G to 4G brought us the revolutionary era of smartphones, mobile banking, and e-commerce.

But if you thought that was big, think again.

5G is extremely fast: up to 100X faster than 4G, and 10X faster than your average broadband connection. The new network radically reduces delays and supports a vast number of devices.

Powering autonomous vehicles, smart factories, remotely controlled drones, augmented reality, virtual reality, in-home IoT, and the world’s first smart cities, 5G is about to allow every person on the planet to tap into data from billions of sensors around the globe.

It represents the promise of on-demand knowledge for anyone, anywhere, anytime.

Estimates vary, but we’re expecting to see roughly 3 billion 5G connections by 2025, which is projected to rise to over 4 billion by 2027.

Even as 5G is continuing to be rolled out, we’re getting ready for the launch of the even faster 6G network. 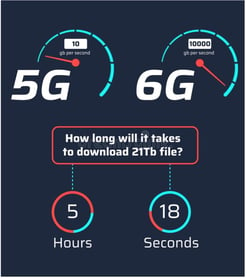 So, what will the benefits of 6G be?

With 5G, we’ll get more powerful AR and VR systems, interconnected smart cities and farms, AI at our fingertips, vehicle-to-vehicle communication, intelligent robotics in factors and more. 6G will take all of this even further.

As Marcus Weldon of Nokia Bell Labs notes, 6G will be a “sixth sense experience for humans and machines.” Where biology meets AI. Healthcare will be one the industries most impacted by the rollout of 6G.

With 5G and eventually 6G on the ground and satellite mega-constellations blanketing the Earth from space, we are on the verge of connecting every person on the planet with gigabit connection speeds at de minimis cost.

These systems will connect 8 billion humans, and trillions of sensors. In this world a decade from now, you’ll be able to connect to anyone and anything, anytime, anywhere... We are heading towards a world of ubiquitous and abundant knowledge.

And because innovation is a function of the number of humans connected to each other, enabled by tools and powered by knowledge, as these numbers all steadily increase, we’re about to witness perhaps the most historic acceleration of technological innovation ever experienced by humanity.

Get ready for warp speed.

In our next blog in this Metatrend series (#9 of 20), we’ll explore the idea of The Trillion-Sensor Economy: The Ability to Sense and Know Anything, Anytime, Anywhere.

ALSO, these 20 Metatrend topics are the focus of my annual Abundance360 Summit where I bring together top entrepreneurs, investors and CEOs to discuss how these Metatrends are re-inventing every industry.

Metatrend #9: Trillion-Sensor Economy: The Ability to Sense and Know Anything, Anytime, Anywhere