Every five days, the Sun provides the Earth with as much energy as all proven supplies of oil, coal and natural gas.

If humanity could capture just one 6,000th of Earth’s available solar energy, we’d be able to meet 100 percent of our energy needs.

And today, we are riding a tremendous wave of advancements in both solar panel efficiency and novel methods of expanding surface area coverage.

Meanwhile, the cost of solar continues to plummet, as this year’s price per watt of solar energy averaged around $3.

Yet while the efficiency of current run-of-the-mill solar panels still hovers around 16-18 percent, traditional silicon solar panels have only reached half of their theoretical efficiency potential. And new materials science breakthroughs are now on track to double this theoretical constraint, promising cheap, efficient and abundant solar energy.

As the price-performance ratio of solar technologies begins to undercut traditional energy sources, we will soon witness the mass integration of solar cells into everyday infrastructure, meeting energy demands across the globe.

The Surge of Solar-Capturing Surfaces

Traditionally, solar energy-generating plants have been deployed on swaths of out-of-eyesight farmland, or on the roofs of self-powered homes and commercial properties.

Yet critics point to land area use as the single greatest barrier to widespread solar adoption.

Over the next decade, however, solar panels will be installed almost ubiquitously across urban and semi-urban areas, embedded in our infrastructure, transparent surfaces and potentially even transit vessels.

Even now, tens thousands of acres of unused urban space — not to mention the soon-to-be-repurposed parking land once driverless vehicle fleets proliferate — could be equipped with solar panels.

And disruptive players are rapidly iterating on solar cell products to enhance their aesthetic appeal.

Several of these technologies focus on integrating solar panels more seamlessly into our everyday lives.

Imagine if every window and every glass surface could capture solar energy, for instance. New advancements in transparent solar panels will bring this future to fruition.

Only five years ago, transparent solar panels (or solar cells embedded in transparent surfaces) could not harness nearly enough energy to justify cost and commercialization. In 2013, their efficiency stood between a mere 1 and 3 percent. What’s more, the opacity of these clear surfaces was still far too high, allowing little light penetration.

Today, however, solar cells and solar capture materials are finally becoming sufficiently versatile for integration in glass and other aesthetic surfaces.

Enter Ubiquitous Energy, a Silicon Valley startup that has raised $22.8 million to date. While still in its nascent stages, Ubiquitous Energy has now developed a transparent solar cell called ClearView Power, achieving 9.8 percent solar panel efficiency. A color-neutral coating for glass, ClearView Power can absorb and convert non-visible light (ultraviolet and infrared) into electricity. It can theoretically be applied to any window of an existing building. Perhaps most notable, however, is the company’s claim that its panels are as clear as glass itself, obstructing no visible light.

To put this in perspective, Ubiquitous has nearly doubled the efficiency of glass solar panels just one year after researchers at Michigan State University announced a similar panel with mere 5 percent efficiency in 2018.

Within the next decade, commercialized solar-capturing glass could begin to populate every skyscraper, school, and residential rooftop, generating abundant and newly democratized energy.

And now, opaque solar panels are also on track to becoming similarly unobtrusive (not to mention aesthetic).

Numerous startups have begun tackling solar tiles and solar roofing technologies, aiming to integrate them seamlessly into the construction of homes and mid-scale structures.

Tesla, for instance, has its own brand of beautifully designed solar tiles called Solar Roof. Incorporating an embedded Powerwall battery, these highly durable solar tiles can both convert and store solar energy throughout the day, then make it available at any time. Amenable even to customized levels of electricity generation (based on household energy usage), Tesla’s Solar Roof essentially converts any home into its own utility.

As remarked by Elon, “We have a shot at being equal to a comp shingle roof plus someone’s utility cost or being lower than that. That’s one of the cheapest roofs available. So you can have a great roof with better economies than a normal fairly cheap roof and your utility bill.”

Projecting a future wherein residential structures not only fuel your household activities but can make you money, Musk believes that solar roofs will cost less than traditional roofing materials (already at near-zero maintenance costs) in just the near future. Not only that, but current figures would suggest that solar tiling can even compete on price with rooftop installation of traditional solar panels: 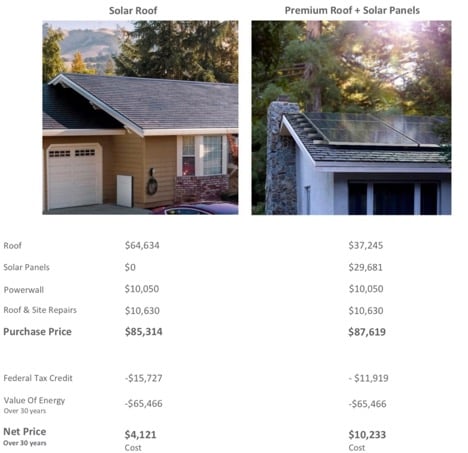 And Tesla is not alone in the solar roof game.

Silicon Valley-based startup Forward claims to have already undercut the price of Tesla’s product with its own solar tiles by more than half. Backed by Forward’s claim to the longest-lasting solar tiles on the market, the company’s first batch of pre-ordered roofs sold out within a week. And while it remains unclear if the company will be able to deliver on these promises, its current figures speak for themselves. Touting an energy density of 19 watts per square foot, Forward’s roofing further incorporates a venting system that offsets efficiency loss caused by solar panel overheating.

But even in light of environmental conditions, stable solar panel efficiency is steadily on the rise.

Historically, inefficient electrical production has stood as the greatest barrier to large-scale solar adoption. Yet the efficiency of photovoltaic cells has improved exponentially since their invention.

Today, most active solar panels average 18 percent efficiency, meaning they capture 18 percent of the energy to which they are exposed.

But new advances, as shown in the graph above, have dramatically increased that number.

SunPower (a $1.5 billion public company), for instance, boasts the most efficient solar panel on the market to date, reaching 22.8 percent efficiency in its X22 solar panel.

Yet others, such as Tesla and Panasonic (jointly engaged in producing solar cells) have broken the 20 percent efficiency threshold in their commercial products today.

And in terms of price-performance, the gross cost of solar panels per watt has fallen a staggering 64 percent since 2014 (in just 5 years).

But even these improvement rates are beginning to be challenged by new innovations borne from R&D.

The National Renewable Energy laboratory and the Swiss Center for Electronics and Microtechnology announced in 2016 that they had built a solar cell capable of 30 percent efficiency.

And just one year later, a group of scientists from George Washington University and the Naval Research laboratory announced that they had built a cell that was capable of 44.5 percent efficiency.

Or take SolSunTech, a NYC-based startup that has achieved 33 percent solar panel efficiency in just a few years. Adopting a distinct geometric approach, SolSunTech is one of the few players using 3D panels as opposed to flat ones. While the three-dimensional silicon wafer’s structure significantly increases its solar-absorbing surface area, its wavy shape further allows re-absorption of the same reflected light. Having boosted efficiency through a simple engineering solution, SolSunTech now plans to begin construction of a 100MW facility this December following the company’s next financing round.

Currently, these high-efficiency cells and panel solutions are prohibitively expensive because of the materials used to build them. However, they notably demonstrate that today’s commercial technology is nowhere near the upward limit of solar efficiency.

One material for consideration is none other than perovskite: a light-sensitive crystal and one of our newer new materials.

Over the past five years, perovskite's conversion efficiency has increased from 4 percent to 23 percent, making it the fastest-developing technology in the history of photovoltaics.

Better still, the theoretical upper limit of its conversion efficiency is about 66 percent—compared to 32 percent for silicon—and its ingredients are widely available and inexpensive to combine. Estimates suggest that perovskite panels will cost about 10 to 20 cents per watt, compared to 75 cents (or almost 4X the cost) of traditional panels. Also, while silicon is heavy and rigid, perovskite is thin, flexible and lightweight, allowing these panels to be placed on any surface imaginable.

To date, scientists have also used a chemical compound called guanidinium thiocyanate to dramatically improve the structural and optoelectronic properties of the lead-tin mixed perovskite films.

And one company most heavily leveraging the material, Perovskite PV, has just secured $2.4 million in seed funding — a modest yet validating start.

Recently, for instance, researchers found a material defect in silicon responsible for the 2 percent efficiency drop experienced by solar panels in their first few hours of use. As solar cells’ electronic charge is transformed in the presence of sunlight, the flow of electrons gets trapped. This, in turn, reduces the level of electrical power that can be produced.

This breakthrough discovery of the root causes of LID brings scientists leagues closer to recapturing that energy. And on a macro scale, this and similar discoveries tremendously accelerate the commercial viability and energy-generating potential of solar power.

According to a recent Harvard study, cost decreases are anticipated to drive the growth of solar power production by at least 700 percent in the next 20 years (by 2040).

And already, solar power as a percentage of the U.S. energy production pie has grown 2,000 percent in the past 9 years. While still amounting to a negligible percentage of our energy consumption, we are barely at the knee of the curve and on the cusp of a solar energy surge.

As grid capabilities and energy storage technologies continue to catch up, solar is joining a host of renewables in transforming our energy economy. Next week, we will focus on this latter part of the equation: batteries.

(1) A360 Executive Mastermind: Want even more context about how converging exponential technologies will transform your business and industry? Consider joining Abundance 360, my highly selective community of 360 exponentially minded CEOs, who are on a 25-year journey with me — or as I call it, a “countdown to the Singularity." If you’d like to learn more and consider joining our 2020 membership, apply here.