What it is: Playing anonymously with the stealthy usernames 'Magister' and 'Master,' DeepMind's AlphaGo AI has been vanquishing the world's top Go players online. An updated version of Google's AlphaGo artificial intelligence has compiled a 60-0 record against some of the game's premier players over the last few weeks. Among the defeated was China's Ke Jie, the reigning world Go champion.

Why it's important: Last year, Go-playing AI AlphaGo made headlines when it defeated world champion Lee Sedol. But by uploading its AI system to the cloud and facilitating direct interaction with humans (without their knowledge), Google DeepMind has proven that the Artificial Intelligence revolution is already here. | Join the Discussion 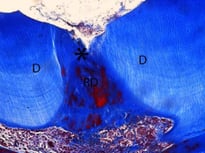 What it is: Researchers at King's College in London have used the Alzheimer's drug Tideglusib to regenerate stem cells in tooth pulp, stimulating the self-repair of large cavities. By applying a small molecule of the drug to a collagen sponge in the tooth, the researchers found that over a period of two weeks the sponge had been replaced by new dentin, naturally repairing the tooth. Because the drug has already been tested clinically, and the collagen sponge is a natural compound already in clinical use, look for this method to move swiftly into trials.

Why it's important: Thanks to converging advances in stem cell research, technologies like artificial intelligence and data mining, and gene editing techniques like CRISPR-Cas9, we're rapidly entering an era where we can repair and improve the regenerative engines of the human body. As these advances continue, we'll not only be able to live longer, healthier lives -- we'll also unlock the keys to treat, prevent and eradicate disease. | Join the Discussion

What it is: Google's self-driving car startup Waymo is scheduled to launch its fleet of autonomous Chrysler Pacifica minivans onto public roads later this month. The fleet will deploy in Mountain View, California and Phoenix, Arizona. Waymo also announced that the company is producing all of the self-driving technology in-house, enabling Waymo to have more control over its autonomous hardware and lower production costs. Sensors that Google purchased for $75,000 in 2009, for example, now cost $7,500 for Waymo's in-house production.

Why it's important: The results from "car as a service" (CaaS) will have major implications in the near future. As Peter mentioned in his Tech Blog, no longer will you buy a car that sits in your driveway or office parking lot, unused 95% of the time. Instead, you'll use CaaS, where you "subscribe" for access to a fleet of autonomous cars, giving you far greater ease, more variety and lower costs than traditional car ownership. | Join the Discussion

What it is: According to a recent report by the American Cancer Society, cancer death rates have fallen by 25 percent in the United States since 1991 -- resulting in more than 2.1 million deaths saved. Data show that, overall, the cancer death rate in men and women fell by about 1.5 percent each year, largely due to factors like declining smoking rates and improvements in diagnostics.

Why it's important: From cancer-detecting smartphone add-ons to nanorobots targeting cancerous tumors, and companies like Microsoft working to 'solve' cancer in the next 10 years by reprogramming diseased cells, exponential technologies are enabling incredible improvements in the detection and treatment of cancers. | Join the Discussion

What it is: A team led by Dr. Beatrice Beyer at the Fraunhofer Institute for Organic Electronics has created the first transparent, flexible graphene display to incorporate an OLED (Organic LED) display. Using a process of chemical vapor deposition (CVD), the team was able to produce an electrode roughly 1/2 inch x 1/4 inch, which is fairly large for this first-of-a-kind device.

Why it's important: At just one atom thick, graphene has been heralded for its unique characteristics in strength, flexibility and electric conductivity. The challenges so far have been in making them in industrial quantities -- in particular, integrating them with additional components or attaching them to other materials, such as fabrics. Here, successfully incorporating an OLED into the graphene is a big step towards successful mass production of everything from flexible, wearable displays to faster, more resilient touchscreens, solar cells and supercapacitors. | Join the Discussion

What it is: A coal-fired thermal power station in Tuticorin, India is turning carbon dioxide into baking soda -- and it's running without subsidies, making it the first example of an unsubsidized industrial plant capturing CO2 for use. A new system installed in the power plant uses a solvent developed by Carbon Clean Solutions that requires slightly less energy to run. It's been claimed that up to 66,000 tons of CO2 gas could be captured to turn into baking soda at the plant each year. The marginal gain in efficiency as a result of this capture system proves feasible for a potentially much greater gain for the clean coal industry in the future.

Why it's important: We are heading towards a future of abundant energy. In 2016, we saw major progress, including solar panels becoming cheaper than fossil fuels and Google's announcement of its commitment to run on renewable energy in 2017. Because this particular advancement also removes CO2 from the air, it's a particularly promising win-win solution. | Join the Discussion

Researchers Design One of the Strongest, Lightest Materials Known

What it is: MIT researchers have just designed one of the strongest lightweight materials known, with a density of just 5 percent, but a strength 10 times that of steel. The team of researchers created this material by compressing and fusing flakes of graphene, resulting in a sponge like configuration with tremendous strength.

Why it's important: Peter mentioned in his blog on Materials Science and Technology Convergence that the development of new fabrication tools will allow precise atomic arrangements, which dictate shapes, geometries and sizes. Such tools have driven the discovery of two-dimensional materials like graphene, which is 200 times stronger than steel by weight. Now that we have an even stronger and more lightweight material to use and experiment with, expect even more breakthroughs. | Join the Discussion

Bitcoin Jumps Above $1,000 For First Time In Three Years

What it is: For the first time in three years, the digital currency Bitcoin jumped over $1,000 on the European Bitstamp Exchange. This brings gains of 125 percent for 2016, outpacing all central bank led fiat currencies. Additionally, there are now roughly 12.5 bitcoins being added every minute, bringing a total value of around $16 billion.

Why it's important: After the Mt. Gox Exchange was hacked in 2013, bitcoin values plummeted and the future of bitcoin was called into question. Now, while still deceptively small in total value and transaction volume, the stability and growth of bitcoin values signal that the currency is here to stay. Look for continued developments in digital currency, the decline of cash, and disruption of companies heavily reliant on credit and debit card transactions. | Join the Discussion