What it is: Uber recently made the world's first autonomous truck delivery, driving 120 miles to Colorado Springs, carrying 50,000 Budweiser cans as cargo. The self-driving semi uses three LIDAR laser detection units, a radar on its bumper and a camera above the windshield. Otto's long-term goals for the technology include navigating construction zones, predicting drivers' movements and dealing with hazards like bad weather.

Why it's important: In previous Abundance Insider issues, we've shared self-driving tractors, speedboats and delivery robots. Fully autonomous trucks in the future will not only help fill the trucking industry's driver shortage, but it will also improve safety, reduce emissions and boost efficiency -- a win for us all. | Join the Discussion

What it is: This year's Nobel Prize in chemistry went to three scientists who developed "the world's smallest machines," and these molecular machines could hold the key to true longevity. Jean-Pierre Sauvage, Sir J. Fraser Stoddart and Bernard L. Feringa developed the nano-machines to target a human's plagued cells with the exact medicines needed; in the long run, they could even perform microsurgeries, changing medicine as we know it.

Why it's important: The global nanotechnology industry is projected to reach $75.8 billion (USD) by 2020. Peter's blog on nanorobots mentioned how entrepreneurial and scientific applications of nanotechnology -- including nanoscale drug delivery mechanisms -- can solve some of the biggest problems we face today. | Join the Discussion

What it is: Researchers from Washington State University have come up with a smartphone-based diagnostic rig that can diagnose cancer with 99% accuracy. The rig involves a 96-well ELISA assaying plate, a 3D printed cradle, a smartphone with a camera, and a microprism array. It detects the inflammatory biomarker interleukin-6 (IL-6); while this marker is mostly linked to depression, allergies and mood disorders, the researchers say it's also "closely linked" to a variety of skin, lung, liver and breast cancers.

Why it's important: This particular diagnostic will help patients quickly determine whether to get more detailed blood-work done, but it's also a huge step toward an actual consumer tricorder. Imagine what healthcare -- and scientific research -- will look like when citizen-scientists have smartphone-sized handheld devices that combine the Internet, blockchain technology, health diagnostics, Geiger counters, projector and zoom lenses, infrared CCD cameras, a variety of lasers, and full-blown spectrometry and bioassay analytics? | Join the Discussion

What it is: Joint research from Edmonton's National Institute for Nanotechnology and Hamburg's Max Planck Institute has yielded an atomic switch for electricity that's 100 times smaller than today's tiniest transistors, as the Edmonton Journal's Bill Mah reports. Each switch is just a few atoms thick, and would use 1,000 times less power than the transistors in today's phones and computers. (For context: the smallest transistor is around 14 nanometers, and a single atom measures between 0.1 and 0.3 nanometers, depending on the element.)

Why it's important: Atom-sized transistors enable electronics to get even smaller, faster and cheaper -- and they also enable true quantum computers. (Be sure to also read Peter's recent tech blog for an in-depth look at the massive implications of quantum computing.) | Join the Discussion

Secretive Canadian Company Teaches Robots to Be More Like People

What it is: This week, Bloomberg Technology profiled Kindred, an artificial intelligence company founded by Suzanne Gildert and Geordie Rose that is working to create machines with humanlike intelligence. Kindred believes intelligence requires embodiment, so they have assembled 50 or so robots that will be operated and trained by humans. The human wears a Virtual Reality headset and a hand controller to operate the robot's movements; data is then collected as the robot learns how to interact with the world, and over time, the robots become increasingly autonomous. (Disclosure: Peter is an advisor to Kindred.)

Why it's important: Kindred is a turbo-charger for AI technology, using human-driven tele-operations as a means to bootstrap AI development. This is a critical piece in the technology trajectory as we move towards a world of abundance. The capabilities they are building will help solve critical problems in every domain from education to manufacturing. | Join the Discussion

What it is: Harvard researchers have developed new printable inks for multi-material 3D printing, allowing them to 3D print a heart-on-a-chip with integrated sensors to simplify data collection. In all, the team developed six custom 3D-printable materials that could replicate the structure of human heart tissue, except with embedded soft strain sensors, according to New Atlas.

Why it's important: Organs-on-chips let researchers study the effect of drugs, cosmetics and diseases on the human body without human or animal testing. Manufacturing and retrieving data from these chips can be costly and time-consuming, but this heart-on-a-chip addresses both of these challenges. By integrating sensors into the material, researchers can conduct complex drug screenings and disease modeling. What opportunities might arise when we can build such sensors into organ replacements, or embed them in healthy organs? | Join the Discussion

What it is: TU Wien researchers have created permanent magnets using a 3D printer -- a world first. Their magnet printer uses specially produced filaments of magnetic micro granulate held together by a polymer-binding material. The 3D printing process creates a three-dimensional object, which is then magnetized with a strong external magnetic field.

Why it's important: This novel application of 3D printing dematerializes and demonetizes experimentation in magnet design, enabling us to experiment with and rapidly prototype entirely new devices and materials. Because of magnets' sheer ubiquity, this breakthrough has implications for everything from fundamental physics to quantum computing, spintronics, biomedical imaging and sensors, and electric drivetrains. | Join the Discussion

What it is: Engineers and chemists at Virginia Tech have produced flexible solar panels that capture light from both the sun and indoor light fixtures. The panels were created through a screen-printing process that used low-temperature titanium oxide paste as part of a five-layer structure, similar to how bathroom tiles are layered. A single palm-sized panel provides about 75 milliwatts of power, and a panel the size of a standard sheet of paper could recharge a smartphone. The process enables us to efficiently fabricate large-area modules and place them in areas where silicon and glass aren't feasible -- for example, light-harvesting wallpaper, lampshades and curtains.

Why it's important: Similar to the shape-shifting panels from last week's Insider, these flexible solar panels open up a door to an entirely new era of energy-saving -- one that is more cost-effective, customized, adaptable and capable of capturing a wider variety of light wavelengths. When we can demonetize and democratize home energy recycling, we enable an abundant solar economy. | Join the Discussion

Netflix vs. Cable, By the Numbers 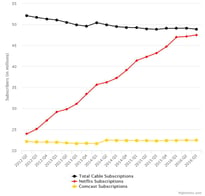 Why it's important: Here's another clash between linear systems and exponential growth, as emerging business models and new technology-enabled capabilities threaten the status quo. These skirmishes will play out in nearly every area of business and industry, and organizations that aren't prepared to evolve only doom themselves to slow, inevitable extinction. | Join the Discussion

Reinventing How We Teach Our Kids